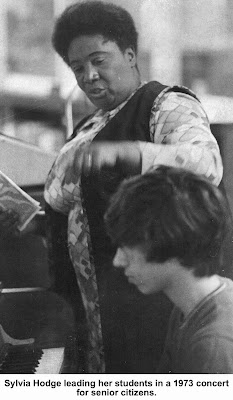 Sylvia Hodge:
A Life of Music
Among the most popular of the many 20th Century teachers at Ridgefield High School was a woman who had to commute 85 miles round trip to get to her classes. But Sylvia Hodge apparently liked teaching in Ridgefield and also liked living in her native New Haven.
And her students certainly liked her.
“What an amazing woman and teacher she was,” said Barbara Asketh Amaral.
When she arrived at Ridgefield High School in 1964, she was known as Sylvia Randall and taught in the then tiny music department. Her name changed after her marriage to Cullen Hodge, who taught mathematics in New Haven.
She was born in 1920, a daughter of parents who had immigrated from the island of Nevis in the West Indies. Both a pianist and a singer, she studied at Yale School of Music and Columbia University and was a graduate of both the Juilliard School of Music and Albertus Magnus College.
During her 25 years at Ridgefield High School, she taught music and led choral groups (by the late 1970s, RHS had singing courses in A Capella Choir, Mixed Chorus, Choir, Voice, and Madrigal Singers). Her choral groups gave countless concerts both in school and in the community — even at Yale University, and in New York, Chicago and Philadelphia. After she led students in a concert for three Ridgefield senior citizen groups in 1973, Eddie Olsen of the OWLS said, “Sylvia Hodge certainly deserves an award as music director of the year.”
He wasn’t alone in his respect for Hodge. Dozens of her students have sung her praises on Old Ridgefield.
“She was an amazing person,” said Stacy Acon in a 2017 remembrance. “I was privileged to have her as my chorus teacher for four years.”
“She was such a kind lady,” said Tracy Skelly Brooks.
“Many wonderful memories of this lovely lady who let me sing even though I couldn’t carry a tune,” said Ellen Cole Tim. “She was the best!”
“Loved Momma Hodge!” said Tracy Petry. “My best memories of RHS are of being in her class.”
“Mrs. Hodge was my mentor — all my inspiration in music came from her, and also life in general,” said James Edighoffer. “She always encouraged me in everything I did.”
“Only woman in the world that could get me to sing in the choir,” said Guy Rossini.
“She used to have a sign up in the chorus room that said, ‘When you sing, you pray twice,’” said Patrice Sarath. “I always liked that.”
“Loved her,” said Deborah Karably. “She taught me how to sing the right way, and if she noticed that one’s diaphragm was not moving the right way to get enough air in your lungs, she had a ‘hands on’ technique that made sure you never made that mistake again!”
“Mrs. Hodge was one of a kind,” said Elizabeth Capalbo. “Juilliard-trained and should have been teaching at a much higher level than RHS. She was extremely talented musically and so very kind to me personally.  I was forced to audition for her in my sophomore year because I kept singing in Study Hall and the only way to not get detentions was to audition...so I did, of course.  When I had nodules on my vocal chords a year or so later, Mrs. Hodge found two doctors for me to see in Hamden and at NYU... When I was unable to sing for a short period, she would give me an excuse note and send me to Peach Lake Deli to buy her a shrimp salad grinder (best shrimp salad ever) and then have me organize the sheet music closet … Fond memories of a great woman who was a safe haven in a tough time.”
Hodge continued to teach into her late 60s, retiring around 1988. In New Haven, however, she continued to be active in music. She was the organist and choir director for many churches — including her own, St. Luke’s Episcopal. Over the years she served as a musical director for organizations in both Connecticut and the Virgin Islands.
“She graced many stages here and abroad with her gift and love for the piano,” her family said at the time of her death.
Sylvia Hodge died in late October 2008 at the age of 88.
Perhaps the most touching tribute to her as a teacher came from Allison Staudacher, RHS 1974. “We had this great chorus that Sylvia hoodwinked us into,” she said. “Lots of us were drawn by her charm and effervescent humor.
“I did not have the picture-perfect upbringing, and once I made the mistake of having so much enthusiasm and pride that I pleaded with my mother to attend a concert. She showed up drunk — badly, sloppy drunk. We all knew the norms, the acceptable; I was mortified.
“I went to the girls room to wallow in tears. Sylvia came to my rescue. How many were there in her chorus — 50,  75? There were a bunch of us — but she knew each and every one. I won’t get into specifics, but the words she said to me changed my life. Sylvia Hodges saved my life.
“I am 60 years of age; I will continue to pay it forward. I would not feel I gave her justice if I did not try to live her words.”