Capt. Everett Roberts,
Lifetime in Defense of His Country
Ridgefield had many heroes in World War II, but among the native sons who seem to have been forgotten is Everett Roberts, a naval officer who once was adrift for more than a day in the 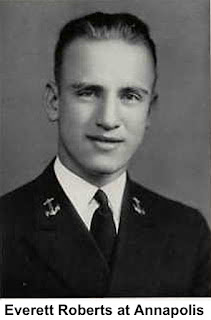 South Pacific after his destroyer was sunk in a major battle.

Roberts went on to spend a long career working on the defense of his country, both in the Navy and in civilian life.
Often called Bob, Everett Earl Roberts Jr. was born in Ridgefield in 1916, son of E. Earl and Alice May Stevens Roberts. His dad was a longtime electrician and local businessman who was also Ridgefield’s dealer in the once famous Locke mowers. His sister was Marion Roberts Haight, wife of the town’s second police chief, John F. Haight Jr.
Roberts was accepted at the U.S. Naval Academy where he became known for his abilities at tennis and sailing. After graduating in 1940 as an ensign, he was assigned as gunnery officer on the USS Indianapolis, based in Pearl Harbor. Fortunately for the Indianapolis and for Ens. Roberts, the heavy cruiser was conducting Marine landing drills 800 miles away at Johnston Atoll when Pearl Harbor was attacked on Dec. 7, 1941.
While stationed in Hawaii, he met Dorothy Ida Bechert whom he married in 1942.
After his tour on the Indianapolis,  Roberts was promoted to lieutenant commander and assigned as the executive officer on the destroyer escort USS Samuel B. Roberts — its namesake, not a relation, was Navy Coxswain Samuel Booker Roberts Jr, who posthumously received the Navy Cross for rescuing stranded Marines from Guadalcanal in the Solomon Islands earlier in the war. The ship participated in the Battle of Samar, a part of the Battle of Leyte Gulf, which has been described as “The U.S. Navy’s finest hour.” The U.S. forces lost 3,500 people, and six ships while 10,000 Japanese were killed, and 27 of their ships sunk, including four aircraft carriers.
After it made repeated torpedo runs against a Japanese cruiser, the Samuel B. Roberts was sunk on Oct. 25, 1944.
Everett Roberts made it to a life raft. A U.S. Navy historical account of the Samuel B. Roberts says  that for those aboard the raft, “The long ordeal, marked by sporadic shark attacks and lack of food and water, lasted for 18 hours. Nearly every survivor was covered head-to-toe in thick black oil. Rubbing one’s eyes only made them burn more and many, accidentally ingesting it, began retching and vomiting. One sailor removed his oil-smeared clothes in order to help him swim easier, but in doing so, exposed the lower portion of his pale white skin not covered with oil. An attentive shark swam up to the naked survivor and nudged the exposed portion. The man quickly put his clothes back on.” 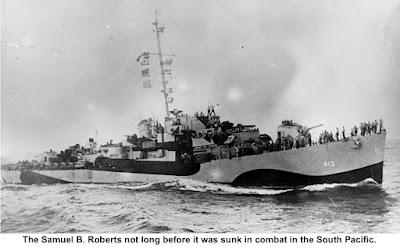 Lt. Cmdr. Roberts’s raft that drifted three days in the oil slick. On the third day they were spotted by a rescue ship that was on its way back to base after giving up hope of finding more survivors. The rescuers were wary, “worried the men in the water might actually be Japanese, known to play possum before attempting to kill any U.S. sailors trying to rescue them from the sea.”
As the rescue boat approached, “the sailors on board, with guns drawn, were ready to fire. One of the rescuers on the bridge yelled out, ‘Who won the World Series?’ Several survivors shouted back, ‘The St. Louis Cardinals!’” The Cardinals had played their cross-town rival St. Louis Browns, winning the series in six games only 16 days before Samuel B. Roberts went down.
In all, 120 men of Samuel B. Roberts’s crew of 220 survived the sinking.
Back in Ridgefield  Roberts’s wife and parents waited weeks to learn his fate. By mid-November 1944, they knew that his ship had been sunk in what news reports were calling “the Second Battle of the Philippines.” Then, The Ridgefield Press reported Nov. 30, “Mr. and Mrs. E. Earl Roberts and Mrs. Everett Roberts enjoyed a belated Thanksgiving dinner last Sunday at the Roberts home on Mountain View Avenue following receipt of a letter on Friday from Lt. Everett Roberts which stated that he was safe and well and hoped to be home on furlough sometime in December, preferably for Christmas.”
Roberts received the Legion of Merit  for “exceptional meritorious conduct in the performance of outstanding services” during and after the battle. 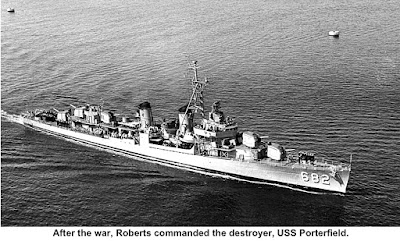 After the war ended,  Roberts remained in the Navy and eventually became the commanding officer of the destroyer escort USS Marsh and then commanded the destroyer USS Porterfield.
Meanwhile, he was promoted to captain and  in 1954 earned a master’s degree in bioradiology from the University of California, Berkeley. Captain Roberts was working with the Military Liaison Committee to the U.S. Atomic Energy Commission at the time of his retirement from the Navy in 1958. (The AEC eventually became part of the U.S. Department of Energy.)
After his retirement from the Navy, Capt. Roberts worked for 24 years for RCA in Moorestown, N.J. where he was involved in the development of the Ballistic Missile Early Warning System (BMEWS) and the U.S. Navy’s AEGIS Combat System used for guided missiles. After his retirement from RCA, he was active in various civic service organizations in the Moorestown area.
Captain Roberts died in 2007 at the age of 91 and is buried in Lewistown, Pa., next to his wife, who died in 1999.