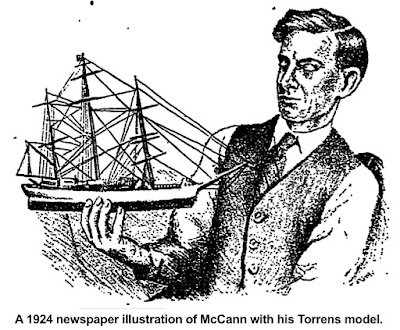 E. Armitage McCann:
A Man of Many Models
Captain E. Armitage McCann. An impressive name but one that’s not exactly widely known — unless you’re a student of maritime history and especially model sailing ships. For Captain McCann has been credited with virtually founding the hobby of model ship-building.
And he knew what he modeled: McCann spent much of his life at sea, most of it captaining ships plying the Seven Seas. His first job, as a young teenager, was aboard  clipper ship on which Joseph Conrad was a first mate.
McCann’s last days were spent in Ridgefield, where he left behind a collection of models that seem to have vanished, unwanted, but would be worth tens of thousands of dollars today.
A son of an Irish clergyman, Ernest Armitage McCann was born in 1875 in Glasgow, 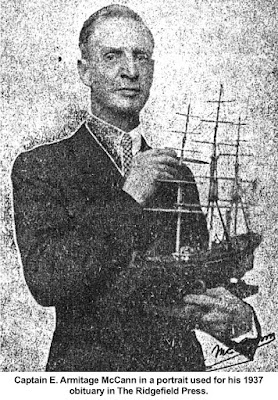 Scotland, and was educated in England. He left home at the age of 14 to go to sea, becoming an apprentice aboard the steel-and-wood clipper ship, Torrens, which was the fastest passenger vessel sailing between London and Australia in the 1880s and 90s. In 1891, the first mate of the Torrens was a Polish mariner who took the name, Joseph Conrad. Encouraged by a passenger, Nobel laureate John Gallsworthy, Conrad changed careers and became a celebrated novelist. Thus, McCann’s first ship was Conrad’s last.

McCann went on to be  an accomplished writer himself, but only after being a first-rate sailor. At the age of 19 he was the master of the 412-ton bark Umvott that sailed the Indian Ocean.
Captain McCann also served on land. At the turn of the 20th Century, he fought in  the Boer War as a member of the Imperial Light Horse regiment in the South African Army. He was injured in battle and sent to Johannesburg to recuperate. There he remained for a while after the war, acquiring “a modest fortune,” according to one historian.
He eventually returned to England  where he was director of the International Art Association in London for several years.
World War I drew him back to the sea. He held captain’s licenses in both England and the United States, and commanded merchant marine vessels for both countries during the conflict.
After the war, he occasionally captained American vessels but he seemed to tire of the maritime life — but not of ships. An accomplished artist who had painted many sailing ships and had built his first model ship at the age of 16, he began in the early 1920s to design precise scale model replicas of famous vessels. And it was here that he found a second “calling.”
His very first post-war model was praised by the noted American maritime artist Gordon Grant, and wound up being sold to Col. Henry Huddleston Rogers, a collector who donated the Rogers Collection now housed at the U.S. Naval Academy Museum in Annapolis.
One of his best known creations was the very ship he signed onto when he was 14: the Torrens of Joseph Conrad. By the 1920s, the Torrens had long been scrapped and he had to recreate the miniature vessel almost entirely from memory. The result was so good, it sold for $18,000 — around $275,000 in today’s money. Quite possibly, the high price was attributed not only to the craftsmanship, but also to the Conrad connection and the fact that the craftsman had sailed the same ship. 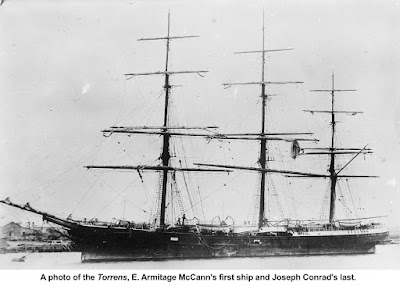 McCann’s love of model-making led him to start contributing a series of how-to columns to the magazine, Popular Science, starting in 1926. The last article was published in 1938, the year after his death. The columns, each offering detailed model plans for a different ship, generated such a large number of followers that McCann joined artist Grant and naval architect Charles G. Davis in founding the Ship Model Makers Club in 1929.  Thanks to his popular columns, the club soon grew to more than 1,000 members nationwide.
During the same period, McCann was also writing books on model making, including some very focused, such as one dealing solely with how to tie the tiny knots and string the fine rigging lines on accurate miniatures of sailing ships.
He wrote scores of articles for newspapers, including The New York Times. In a 1936 Times piece, he explained some of the attractions of the hobby:
“With a very small outlay of money for material, one can either get results fairly quickly or spend the spare time of years in endeavoring to achieve perfection; some even say that a ship model should never be completely finished. A workshop is convenient, but not necessary. Good models have been made by the bedridden. Unlike so many things that are uninteresting until finished, a ship model is good to look at from the first roughing out of the hull. An earnest modeler is as eager to invite comment and praise of his progressing ship as of his finished product.” 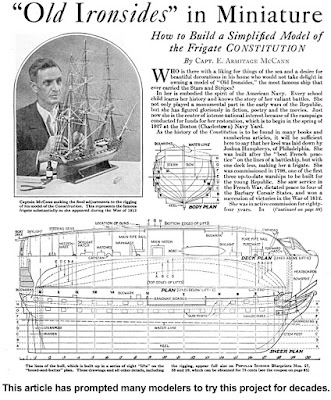 McCann also edited the club’s magazine, The Shipmodeler, for five years until, in 1933, his health started to fail. 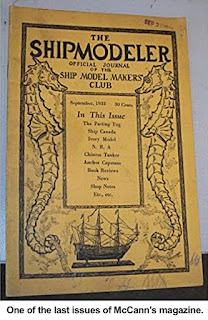 Thinking that the country climate might help his illness, Captain McCann moved from Brooklyn, N.Y., to Ridgefield that year, finding a house on Bryon Avenue.
“The captain’s Bryon Park home was filled with models of ships of all descriptions as well as pictures of vessels and other treasures collected during his lifetime,” The Ridgefield Press reported. “One of his masterpieces was his model of the frigate Hartford, the masthead of which is in the state capitol at Hartford.”
Four years after he came to Ridgefield, the captain died at the age of 62. The Press noted that he left a nearly completed article  (which Popular Science published in 1938) and  “virtually complete a model of the Confederate ship Alabama on which he had been working for more than a year. Judging from the value of his other work, this model should be worth several thousand dollars.”
Alas, a sad story was to soon unfold. Captain McCann died without a will and had less than $60 in the bank, said modeling historian John C. Hudock. He was estranged, possibly divorced, from his wife, British sculptor Wilhelmina Louisa Neuwirth (1877-1964), who lived in England. They had had no children.
McCann left behind 22 models and a library of books that required 15 pages to list in the 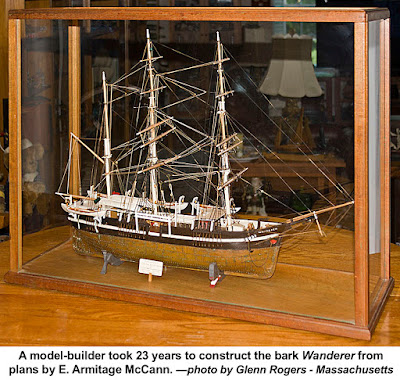 Ridgefield probate records. “Remembering that Captain McCann died in the depths of the Great Depression, it is not too surprising that the court was unable to sell the models and the books in four years of trying,” said another historian, Bill Russell. “At that point the court gave everything to the undertaker to compensate for the debt he was owed.”

No one knows what ultimately happened to the models, but they were probably sold for a fraction of their true value which, in today’s money, would be more than $1 million! The funeral home was Lawrence and Gillespie on Main Street (predecessor of Kane), which may have sold or given away some of them locally. Thus, somewhere in Ridgefield today, on shelves gathering dust, may be a few priceless E. Armitage McCann models of historic ships, just waiting to be discovered.