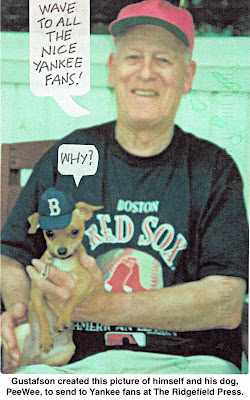 Bob Gustafson:
Ridgefield’s Cartoonist
Several nationally known cartoonists have lived here, but none has taken up Ridgefield as a subject for his art as Bob Gustafson did. The Ridgefield Press’s cartoonist for more than 40 years produced literally thousands of cartoons for the newspaper. Some teased town officials for their actions or inactions, others illustrated community problems,  many promoted good causes in a good-natured way, and a few were just good gags.
A native of Brookline, Mass., Robert D. Gustafson was born in 1920. He  was a paperboy as a youngster, served as a pilot in the U.S. Army, pitched semi-pro baseball in the Boston area, played drums in a band, and studied at the Boston Museum of Fine Arts School.
Before he was 21, he was sending cartoon gag ideas to The New Yorker, and several were purchased and used. He later did cartoons for magazines like Good Housekeeping and Saturday

“You have to come up with something you like and let everybody judge it,” Gustafson said in a 1991 interview about his work. “Sometimes it flops. It’s not like being a plumber — when you go in and fix a pipe and turn the faucet on and the water comes out, you know it’s OK.”
After working for a Boston magazine and a newspaper, he got a job with King Features, ghosting several comic strips and eventually taking over the nationally circulated strip, “Tilly the Toiler,” which had started in 1921 when he was only a year old.  He later worked for Mort Walker on both Beetle Bailey and Hi & Lois. And on the side, he did cartoons for The Press.
“Cartoonists never stop learning,” he said. “They’re always observing.”
Although he lived in Ridgefield only from 1954 to 1960, Gustafson continued to “observe” town affairs at his Greenwich home through the pages of The Press, which he read thoroughly for ideas. He’d also chat by phone each week with the Press’s editor, looking for ideas on timely issues — and giving the editor hell if he had changed a word or two in a caption the previous week. 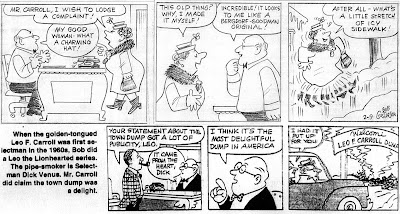 Gustafson had several favorite subjects, including the Cass Gilbert fountain. He was aghast at suggestions that the landmark be moved from its island at Main Street and West Lane, complaining repeatedly about that work of art’s being sacrificed to “the almighty automobile.” In cartoon after cartoon, he dealt with the issue. Saddened by cars all too often crashing into the monument, he’d offer entertaining suggestions for protecting it — one shows the fountain, raised on a mound and a 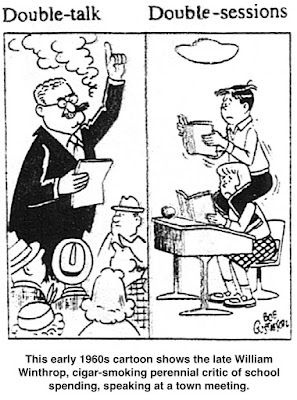 tunnel running under it to carry the traffic. But one week, seemingly giving up hope, he drew another showing the fountain, well-protected from cars by big railings, being hit by an airplane.

He also attacked vandalism, often portraying vandals as evil-looking thugs. Being a senior citizen himself, he encouraged help for Ridgefield’s elderly, and would offer suggestions on how to 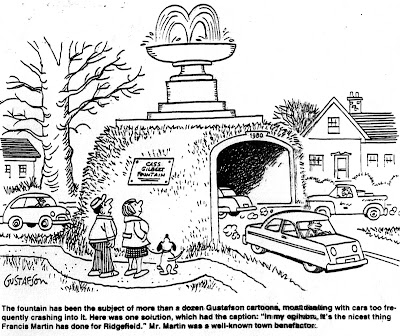 improve their lot. He supported many town organizations, but especially the Community Center — he was active in the center in its early years and, as an accomplished photographer, used to take publicity pictures for them.

One of his favorite subjects in the 1950s and 60s was Leo F. Carroll, the colorful and charismatic first selectman and former state police leader. Carroll, who lived directly across Wilton Road West from Gustafson, was often teased for his pronouncements such as when he declared that 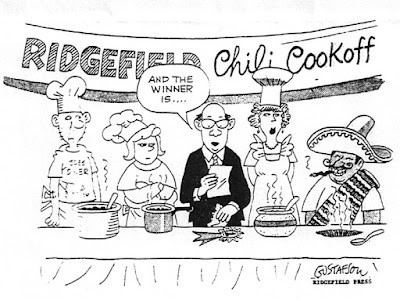 Ridgefield’s dump was “the most delightful dump in America.”

Though most of his Press cartoons were very local in nature, some captured wider attention. When controversy erupted over a new gas station’s need to cut down some large trees to make access to the highway safer, Gustafson drew a cartoon showing a couple of giant trees like the redwoods in California with a big opening so people could drive through them. Shell Oil Company offered to buy the cartoon.
A gag, playing on the idea that we’ve all seen supermarket shopping carts in strange places, 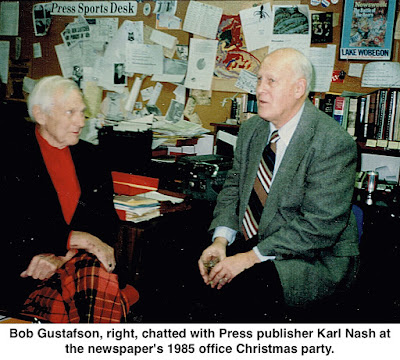 showed an Arab on a camel in the middle of a desert coming upon a shopping cart. Grand Union later bought it.

Gustafson won many awards for his work including commendations from professional cartoonist organizations and from the New England Press Association.
For relaxation, he enjoyed golf and following the Boston Red Sox. For many years he loved teasing Yankee fans, but by the late 1990s had come to enjoy watching the Sox’s arch enemy — he especially admired Derek Jeter.
Bob Gustafson died in 2001 at the age of 81. 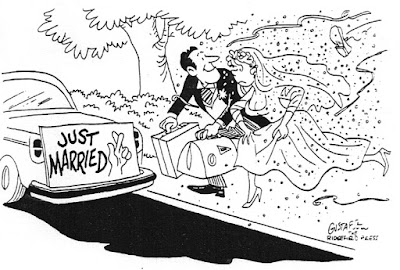 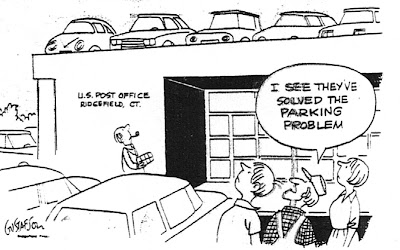 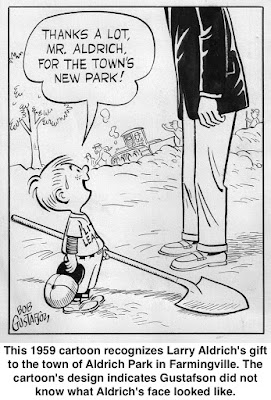 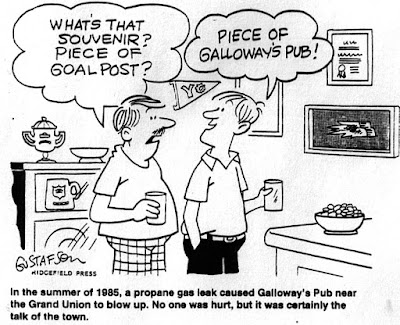