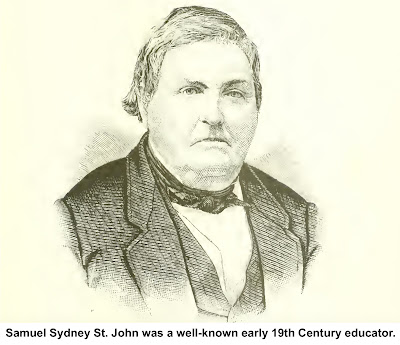 Samuel Sidney St. John:
A Man Who Loved To Teach
Nearly two centuries ago, Samuel St. John opened the Ridgefield Boarding School, offering a secondary education to teenagers near and far. Then only 26, St. John would spend the rest of his career in education, leading some of the earliest free schools in New York City.
Later in life, St. John would experience — and survive — much family sadness.
Samuel Sydney St. John was born on a Ridgebury farm in 1806. When he was 12, his father, Thomas, moved to the city and sent his son to the best schools available there.
Samuel graduated from Columbia in 1828 and while he was admitted  to the New York bar, never practiced law. Instead, he moved back to Ridgefield and opened a store in Ridgebury. A year later, he married Lucy Amy Brush, who’d grown up on a  Ridgebury farm about a mile south of the St. John spread.
Perhaps because of the fine schools he had attended, St. John had a love of learning. In 1832, he  decided to open his boarding school. “As a teacher he excelled — patient, laborious and conscientious, he soon made his school famous and successful,” an obituary said. “It was patronized not only by the citizens of Ridgefield and adjoining towns, but by many from New York City.” His graduates went on to major institutions such as Yale.
The school, which offered college-prep and commercial curricula, was in the village, probably on Main Street, though its exact location hasn’t been found. It operated long before Ridgefield — or most towns — had a public high school; eighth grade was then the highest year of schooling for most Americans. However, if a young man wanted to go into the clergy, medicine, or law,  preparation for college was usually needed, and the Ridgefield Boarding School offered that, along with vocational training for banking and business.
Tuition was $25 a quarter or $100 a year, which in modern dollars would be about $2,700. If you wanted French or math in that curriculum, the total would be around $3,200.
An 1833 advertisement that appeared in The New York Journal of Commerce  never mentions the sex of students. While the school may have been only for young men, the ad’s wording seems careful not to be gender-specific, and it’s possible young ladies were also admitted. (The Rev. David Short’s private school, which followed St. John’s, was co-ed.)
The advertisement gives interesting glimpses of some aspects of secondary education back then, and a look at how Ridgefield was promoted in the first half of the 19th Century:
RIDGEFIELD BOARDING SCHOOL
This institution is permanently located at Ridgefield (Fairfield Co.) Connecticut, and no exertions will be spared by the Principal to render it worthy a continuance of the liberal patronage it has hitherto received.
Ridgefield is one of the most healthy and retired villages in the State — noted for the morality and intelligence of its inhabitants, and possesses every requisite to make it an eligible situation for youth. It is fifty-four miles from the city of New York, with which it has a direct and daily communication. The course of study will be adapted to the wishes of the parents or guardians of each pupil — preparation for the Counting House or College. The French and Spanish Languages will be taught, if required.
The yearly course of study will be divided into two terms, of twenty-four weeks each — the first to commence on the first Monday of May — the second on the first Monday of November.
Terms for Board, including Tuition in English studies, $25 per quarter — Languages, or Mathematics, an additional charge of $5. No extra charges except for Books and Stationary.
The Principal is a graduate of Columbia College, and has liberty to refer to the President and Professors of that institution. Also, Rev. Wm. A. Clark, D.D.; Rev. Edmond D. Barry D.D.; Dr. Wm. Hibbard; Aaron H. Palmer, Esq; Messrs. S.C. & S. Lynnes; John Moras, Esq.
SAMUEL S. ST. JOHN, Ridgefield, Aug. 19, 1833
The school lasted until around 1841 when St. John received an offer from the General Society of Mechanics and Tradesmen to run its school in New York City. Founded in 1820, before there were public schools in New York, the Mechanic’s School was one of the first two free schools in that city.
In 1842, the New York City Board of Education was created  and began operating free public schools. A year later St. John was hired as principal of  School No. 26 in the 4th Ward and not long afterward was given general supervision of the other schools of the Ward, overseeing more than 4,000 pupils.  By 1848 his reputation had grown to the point where he was named commissioner of the schools in the City of New York, a post he held for two years.
While he was leading public schools, St. John also continued to teach privately. “He has had numerous private pupils in the classics, in which he always took great delight,” an obituary said.
St. John retired in 1859 and returned to Ridgefield, living on the family farm on Ridgebury Road, a little north of George Washington Highway. The St. John homestead still stands at 620 Ridgebury Road. 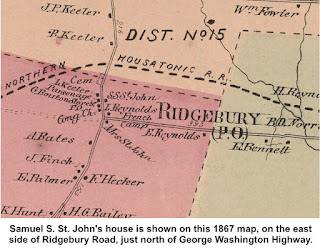 Like his father, Samuel had an interest in public service. In 1837 when he was running his boarding school, he served as a  state senator for the 11th Connecticut District. In 1864 he was elected a Ridgefield state representative  to the General Assembly and served as a selectman a year later. He was also a county commissioner in the days when Connecticut had county governments.
“While he was a man of decided convictions, he was extremely reticent and retiring, never obtruding his opinion upon others unless called upon, or he saw good special reasons for so doing,” his obituary said. He was “a sincere lover of his country and its institutions, ever loyal and hearty in his support — a politician in the best and truest sense of the word, but never an office-seeker.”
Samuel St. John died in 1882 at the age of 75. 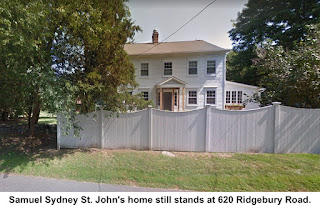 He and Lucy had a son who, at age 18, graduated from his father’s alma mater, Columbia. Thomas Platt St. John became a respected attorney in Manhattan and was also a promising political official  — in 1851 at the age of 21, he was elected as a state representative from a district of New York City, and was subsequently reelected. 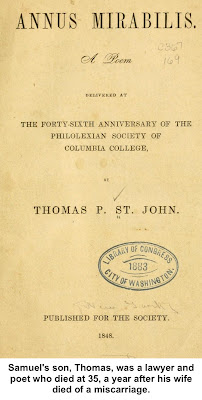 Thomas St. John was also an accomplished writer and scholar — Annus Mirabilis, a long poem he wrote and read before the Philolexian Society of Columbia College, was published as a small book in 1848 that is still available today in reprints. “He was a great admirer of Shakespeare, and would quote with remarkable accuracy voluminous portions of that celebrated author,” said a biographer in 1881.
However, Thomas apparently tired of the pace of the city. He and his new wife, Mary Louise Runyon, opted in 1859 to join his father in his return to Ridgebury and the life of a farmer.
Ridgefield, alas,  proved to be a place of sadness. Thomas and Mary lost their infant child soon after they arrived.  Four years later, Mary, only 32 years old, died during a miscarriage. Thomas was despondent and died a year afterward at the age of 35. The official cause was given as diabetes.
at April 20, 2020