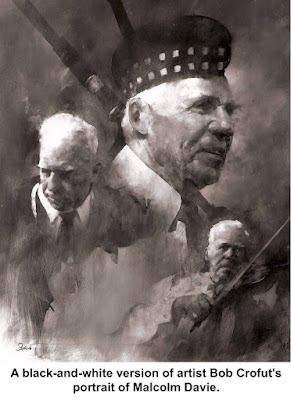 Macolm Davie:
The Piping Preacher Who Listened
Malcolm Davie spent much of his life trying to help others. One way he did that was being a blowhard — not with words, but with pipes.
Davie was best known in Ridgefield as a bagpiper, but over his long life he was also a minister, a violinist, a math teacher, a poet, a songwriter, a counselor, and an ice-cream maker who held four university degrees. And he was a man who was always willing to listen to the problems of others.
Malcolm Henderson Davie was born in 1918 in North Bay, Ontario, into a family that included four professional concert singers. A talented musician himself, he played the violin and taught himself to play the bagpipes.
Davie earned  a bachelor’s degree from the University of Western Ontario in 1945, a master's from the University of Toronto in 1947, a bachelor of divinity degree from Andover-Newton Theological School in 1950, and a master’s in psychology from Boston University in 1959. He became a U.S. citizen in 1955. 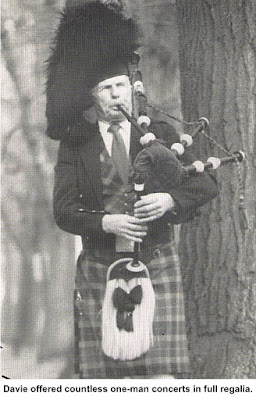 At various times he worked for the Davie family ice cream business, taught math, was a minister, and served as a counselor at several institutions. His ministerial work included serving at the United Church of Christ in Monroe  and with several congregations in Massachusetts.

“Malcolm could always be counted on to engage in a thought-provoking conversation on any one of various philosophical or ethical topics,” said one longtime friend. “A former minister, Malcolm readily sensed the troubles or concerns of others and could be counted on for a sympathetic ear and appropriate words of wisdom.”
For 20 years he toured the United States with his own musical program, “A Wee Bit of Bonnie Scotland,” playing his bagpipes in full Scottish regalia and offering his audiences tales and humor of Scotland.
He made many piping appearances in Ridgefield where he spent the last 30 years of his life. He was also well known by many area children as the man who operated the carousel at the Danbury Fair Mall a couple of days a week and by many athletes as the man who managed Yanity Gym for the Parks and Recreation Department. 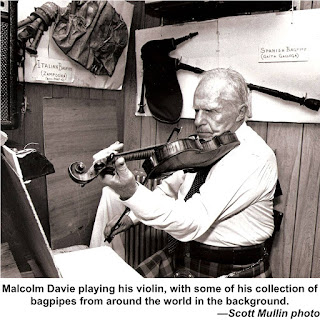 His interest in poetry was also seen locally in poems published in The Press and elsewhere. In honor of Arbor Day in 1987, he wrote the poem, “The Hills and Trees of Fair Connecticut,” and composed music to go with it. He performed it at the Ridgefield Community Center and, at the suggestion of then State Rep. Barbara Ireland, presented it to the State Legislature on Earth Day.
His 1990 poem “Spring Comes to Connecticut” ended with this stanza:
Spring in Connecticut!
Our old familiar land, refurnished!
No human effort brings it here.
No human hand prevents its coming.
Take it as your own,
This lavish gift from heaven.
He died in 2006 at the age of 87.
Davie once told an interviewer: “The greatest satisfaction in life is not self-interest but interest in the people around you — to give a person a boost or to let them know they are important to talk to.”
However, his help for troubled souls wasn’t always verbal, as Ridgefield artist Bob Crofut found out.
“We were good friends,” Crofut told Ridgefield Press editor Macklin Reid. “We used to talk a lot, used to have dinner down at Friendly’s a lot. One time I went to see him over at the old gymnasium and I was kind of discouraged about something — something was bothering me.”
Davie listened, but didn't offer advice.
“Instead of talking to me, he grabbed the pipes and he played ‘Scotland the Brave’ — in the gymnasium. It reverberated like crazy. It’s very moving — they play it in battle. No other words were needed. I left kind of lifted up.”