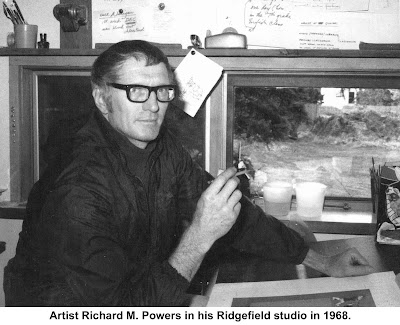 Richard M. Powers:
The Art of Science Fiction
Millions of  readers — especially of sci-fi — have seen his pictures, but few knew the name of Richard M. Powers, the artist whose work revolutionized science-ﬁction art and has appeared on the covers of more than 800 of the best science ﬁction books.
Powers’s career spanned more than 50 years. “During that time he established himself as one of America’s preeminent illustrators for science fiction novels as he transformed that style of illustration with what he once termed ‘abstract surrealist expressionism,’ nearly creating a style of fantasy art,” wrote Ridgefield Press reporter Jonathan Pingle in 1996.
In 1983, Locus, the science ﬁction industry’s newspaper, described his work as having “revolutionized science ﬁction book cover art in the ﬁfties.”
Richard Michael Gorman Powers — he sometimes used the name Gorman Powers, reflecting his mother’s maiden name — was born in Chicago in 1921. He studied at the Art Institute of Chicago and the University of Illinois, and during World War II served with the Army Signal Corps. After the war he continued his studies at The New School in New York.
In 1949 Powers began doing art for Doubleday’s science ﬁction hardcover books, and was an almost immediate success. He wound up doing the cover art for such classics as Isaac Asimov’s Pebble in the Sand and Theodore Sturgeon’s More Than Human.
In 1952 he was included in the New Talent Exhibition at the Museum of Modern Art in New York City, where his work is now part of the permanent collection. Over the years he has also exhibited at  the Metropolitan Museum of Art,  the National Academy, and at the Whitney Museum, all in New York, and the Corcoran Gallery in Washington. 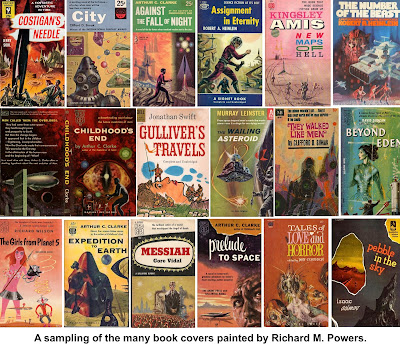 In 2001, Jane Frank, Vincent Di Fate, and son Richard Gid Powers wrote a book, The Art of Richard Powers.  DiFate, a science fiction artist, said Powers had “an emotional rhythm that is captivating, plumbing the depths of the human spirit and challenging the will of that spirit to survive in a future life with danger. These paintings are far more than insightful, they are, in a word, brilliant.”
As an illustrator, his work went beyond science fiction, appearing in all areas of publishing from the late 1940s to the 1990s. He produced literally thousands of book jackets and covers including the ﬁrst edition of Bernard Malamud’s The Natural, the Dell Laurel Poets series, and most the Easton Press’s editions of Hemingway’s works.
He also did the book jacket and some interior illustrations for Silvio Bedini’s Ridgefield in Review, the 1958 history published for the town’s 250th anniversary celebration. In 1983, for the town’s 275th birthday, he did a poster of the Battle of Ridgefield.
Powers and his family moved to Ramapoo Road in 1954, then to Old Branchville Road. In 1966, he sold his Old Branchville Road house, building a smaller home on his remaining land on Bloomer Road.
He died in 1996 in Madrid, Spain, where he had been wintering each year with his daughter, Elizabeth. (His son, Richard Gid Powers, is a history professor and author of such books as  Secrecy and Power: The Life of J. Edgar Hoover and Broken: The Troubled Past and Uncertain Future of the FBI.)
Richard Powers was posthumously inducted into the Science Fiction Hall of Fame in 2008 and the Society of Illustrators Hall of Fame in 2016. 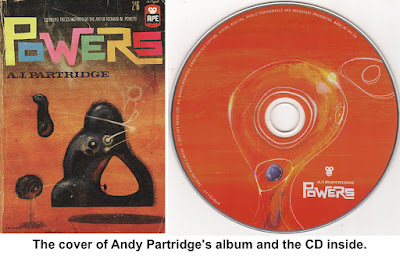 He was also honored in a rather unusual way. In 2017, Andy Partridge, former frontman of the British New wave band XTC, released a CD of music inspired by Powers’ art. According to Partridge, as a boy, he used to borrow three science fiction books a week, take them home and instead of reading them, he’d stare at the Richard Powers art. “Mesmerized by the covers,” he imagined his own stories to match the paintings as he stared at them, sometimes for hours.  Later, he created “a sort of soundtrack to the paintings,” as one critic put it.  “The resulting album [is] a musical accompaniment to the variety of alien landscapes which Powers illustrated so profusely.”
The name of the CD album? “Powers.”