Dino ‘Ching’ Cingolani:
A Man of Mounds and Islands
Few today will remember his name, but time was in Ridgefield when Dino “Ching” Cingolani was almost revered among local  baseball fans. The Ridgefield native was wooed by several major league baseball teams for his pitching prowess, played in the minors, and was once praised by the New York Giants great, Carl Hubbell.
A Ridgefield native, Dino Vincent Cingolani was born in 1927, son of  Gino and Ida Pambianchi Cingolani. He grew up in the Branchville section of town and graduated in 1945 from Ridgefield High School. There, he had starred on the baseball team and helped lead it to conference championship — not only with his pitching, but with his .485 batting average. 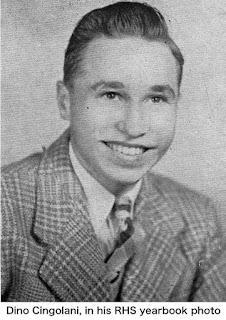 The New York Giants, Brooklyn Dodgers and Philadelphia Nationals all offered him contracts to pitch. However, the 18-year-old chose to take a look at the Giants and, in 1946, headed off to training camp in Florida — on the train trip down, he played pinochle with stars Buddy Kerr, Mel Ott and Hal Schumacher.
In camp he pitched against Bobby Thompson and others, with Carl Hubbell umpiring. Hubbell at one point declared that the Giants had  “another Bob Feller.”
However, after six weeks in camp, Cigolani returned to Branchville, having balked at signing a contract that the Giants had offered him. Meanwhile, Jack Barry,  coach at  Holy Cross College, offered him a scholarship to come to Worcester, Mass. Back in those days Holy Cross was a baseball powerhouse and had had more than 60 graduates who went into the majors.
Cigolani thought it over and opted finally to sign with the Giants. He later said it was “a big mistake,” but didn’t explain why.
Starting in 1946, Cingolani played four seasons for the Giants' farm teams in such places as Erie, Springfield, Ogdensburg, and Peekskill with the likes of Hoyt Wilhelm and Bobby Thompson — taking a break to serve in the Army and then returning in 1952 to play at Knoxville.
Over five seasons he compiled a record of 46 wins and 36 losses, with a batting average of .313. While playing for the Springfield Giants in 1947, he had his best hitting season, with a .347 average, but it was also his only losing season as a pitcher, 11-15.
In 1952, after a season with Knoxville, he decided to abandon minor league play, and return to Ridgefield where he pitched for local teams and in the Danbury City League for many years.
When Cingolani was honored by the Ridgefield Old Timers Association in 1995, ROTA observed, “Chink would be the first to admit that he made some ill-timed and poor decisions along the way, undoubtedly blocking a sure road to the majors.” The association did not say what those decisions were.
Cingolani spent many years working as a foreman at the Perkin-Elmer Corp. in Norwalk, and then as a salesman.  In 1969 he and his wife, the former Alice Salvestrini, moved to Norwalk.
Later in life Cingolani focused on his other favorite sport, fishing. He did a lot of it off the shore of Norwalk and he and Alice became very involved promoting public use of and camping on some of the wild Norwalk Islands — particularly Shea and Grassy Islands owned by the city. Alice Cingolani, in fact, was Norwalk’s “Island Warden.”
Adults, Dino told an interviewer in 1990, enjoy the fishing and the scenery, but it’s children who get the most out of the islands.
“You know what it does for them, to take them out, have them build a fire at night?” he said. “They can pick up a shell, dig for clams, or catch a fish. You can’t just watch life on TV.”
Dino Cingolani died in Norwalk in 2004 at the age of 76.
In May of 1946, when he was entering the minor leagues, Cingolani filled out a questionnaire for the American Baseball Bureau in Chicago. Aside from the basics, such as his height (5 foot 9 inches) and weight (160), the form asked for his “ambition in baseball.”
“To get to the top,” he replied.
And “what do you consider your most interesting or unusual experience in baseball?”
That, he replied, was “pitching a no hitter and losing.”
That rare event occurred on April 26, 1944, when the right-hander hurled the no-hitter against Wooster Prep, only to lose 3-2. He faced 23 men in six innings; six reached first — five on walks and one on a fielding error. Unfortunately for Cingolani and Ridgefield, the locals committed errors in the third and fifth innings with walked Wooster players on base, allowing three runners to score.
at April 20, 2020