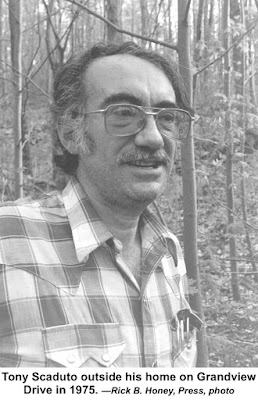 Anthony Scaduto:
Covering The Bad and The Beautiful
During his long life as a reporter and as a biographer, Tony Scaduto covered the bad and the beautiful — from Maffia dons to masterful musicians like Bob Dylan and the Beatles and celebrities like Marilyn Monroe.
A man who was known for wielding words well even when in high school,  Anthony Scaduto was born in Brooklyn, N.Y., in 1932, son of a food importer and a seamstress. After graduating from high school, he got a job as a part-time copy boy at the New York Post to help pay for his tuition at Brooklyn College. He quit college after two years.
“I gave that up after I realized I was getting a better education on the streets of New York than I’d ever get in college,” he told Press interviewer Rick Honey in 1975.
One of his first beats was the police headquarters in Brooklyn. “That’s where I learned a lot about cops, some of whom I hated and some of whom I loved,” he said.
His coverage of the police included a much-praised 1964 series on the NYPD that, said The New York Times in 2017,  “captured the tensions of that time, dynamics still evident a half-century later.”
Scaduto had written, “The New York policeman today is a perplexed, sometimes frightened man. From the cop on the beat to the highest-ranking superior, he points with pride to the praise the force has received from some quarters for its careful, bend-over-backwards handling of civil rights demonstrations, which are often admittedly deliberate attempts to provoke arrest. At the same time, he is bewildered, honestly shocked, to discover that a large number of Negroes and Puerto Ricans distrust and fear the police uniform and are expressing their hostility more and more openly.”
Covering crime — especially the mob — was one of Scaduto’s specialties at the Post. He grew up in a Brooklyn neighborhood controlled by the Maffia and, coming home from playing baseball one day when he was 12, saw the victim of a mob hit on the sidewalk in front of his friend’s house. “I was constantly aware of who the so-called wise guys were — the men in the mob or on the fringes of it,” he told Honey.
After 20 years at The Post, he left to focus on freelancing, mostly books, the first of which was  Bob Dylan: An Intimate Biography,  published in 1972. It took a journalistic look at Dylan’s life and work, and has received much acclaim over the years. “It is regarded as an influential book in the field, being one of the first to take an investigative approach to writing about his subject,” said one critic. 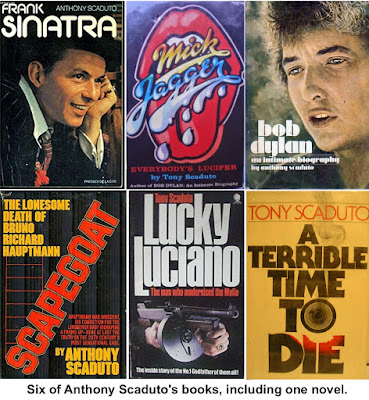 Among the fans of the book was Dylan himself. “I like your book,” the singer-songwriter told Scaduto after reading the manuscript when it was 80% complete. “That’s the weird thing about it.” Scaduto had allowed Dylan to see the incomplete manuscript if Dylan would consent to giving a rare interview. Dylan did.
In 1976, Scaduto produced Scapegoat: The Lonesome Death of Bruno Richard Hauptmann, an investigation into the trial of the man who was executed in April 1936 for kidnapping and killing the Lindbergh baby. “Mr. Scaduto, aided by his experience covering crime for The Post, built a convincing case that justice had not been served,” The Times said. “He found evidence that had been withheld, witnesses who had bent the truth, and more.”
“Scapegoat should be compulsory reading for those who fear that postwar rulings by the Supreme Court, protecting the rights of the accused, have tied the hands of justice,” a Times reviewer had said.
Scaduto also wrote biographies of Mick Jagger, Frank Sinatra,   and the Beatles as well as many articles for Playboy, Penthouse, Rolling Stone, and Newsday, the Long Island newspaper. His Lucky Luciano: The Man Who Modernized the Mafia,  published in 1975, was written under the pen name Tony Sciacca.
He also tried his hand at fiction, turning out a 1988 novel, A Terrible Time to Die, for G.P. Putnam’s. 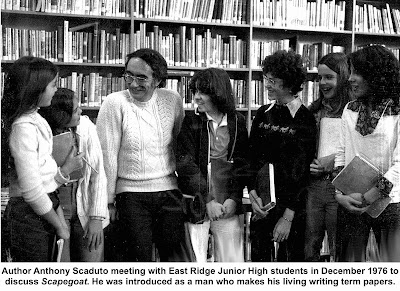 Scaduto may have been introduced to Ridgefield in the early 1970s when he came to town to write an article for The Post about the growing battle over the use of certain books in the Ridgefield schools — part of the so-called “book burning.” While he didn’t like how the school board was handling the issue, he did like the town. In 1973, he moved to 125 Grandview Drive. “I was tired of New York City and its craziness,” he said.
Eventually, however, he apparently missed his old stomping grounds — by 1980, he had moved back to Brooklyn. During the 1990s he wrote many pieces for Newsday, the Long Island newspaper.
He died in 2017 at the age of 85.
Even as he was digging into and writing about popular musicians and unpopular crime bosses,  Tony Scaduto as a Ridgefielder kept his eye on the local scene, penning pointed letters to the Press about the goings on.
In 1975, for instance, he quickly took on a Ridgefielder who had written a letter to the editors, opposing spending town government money on the privately owned Ridgefield Library.
“The library building is such a terrible waste of space and our master planners should find other uses for the property,” Scaduto responded the next week. “Let us sell all the books for kindling — I hope no one objects that that smacks of conservation, so pinkish a word — and tear down the building and then construct on the site an old-fashioned bowling green. And when the Rip Van Winkles of this town awake, they’ll feel perfectly at home.”