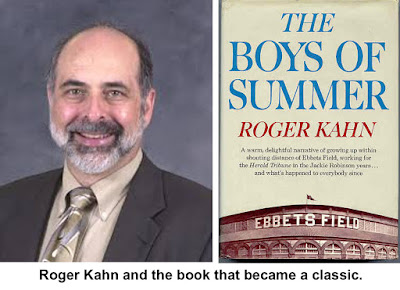 Roger Kahn:
A Boy Of Summer
Roger Kahn’s 1972 bestselling book about the Brooklyn Dodgers was so famous that when New York Governor George Pataki created a commission in 1997 to explore bringing the Dodgers back to Brooklyn, he named Kahn a member.
The Boys of Summer, which had led the New York Times bestseller list for weeks, told the story of the 1950s Dodgers. Called by James Michener “the finest American book on sports,” it sold hundreds of thousands of copies and is still in print. In 2002, it was ranked #2 on Sports Illustrated’s list of the best 100 sports books of all time  (A.J. Liebling’s The Sweet Science, about boxing, was #1.)
Roger Kahn was born in Brooklyn in 1927 to a trivia-loving father who provided questions for the radio quiz show, “Information Please,” and a baseball-hating mother who taught her son poetry and Shakespeare. Both were teachers.
In the early 1950s he quit New York University after three years to join The New York Herald Tribune as a copy boy (he admitted to Ridgefield Press reporter Linette Burton that he got the job “by using a clever device, which was: my father knew the managing editor.”).
At the age of 24, he was assigned to cover the Dodgers. “It was a rich time in the game’s history, especially in New York, the undisputed center of the baseball universe, home to three teams and three perfervid fan bases,” said The New York Times.
He spent two years reporting on the Dodgers and was then assigned to cover New York Giants’ baseball.
In the mid-1950s, he left the Herald Tribune to work as a sports editor for Newsweek, and to freelance for Sports Illustrated, The Saturday Evening Post and Esquire.  By the 1960s he was writing books on religion and sociology, including The Passionate People: What It Means to Be A Jew in America.
Then came The Boys of Summer, the first of what was to be many books about sports and sporting personalities, but clearly, the best of them all.  The Times called it “as influential a baseball book as has been written in the last 50 years,” but Sports Illustrated qualified that, terming it “A baseball book the same way ‘Moby-Dick’ is a fishing book.”
The Boys of Summer was coming out  just as Kahn was moving to 830 North Salem Road in 1971, and the promotional tours and interviews that the book prompted made writing tough.
“Each day I keep kicking the wastebasket and beating my brains to get out one page a day,” he told Nelson Merrell of The Press in June 1972.
During a long promotional-tour period, Kahn was twice interviewed on the TV show of future Ridgefielder Dick Cavett, but he most remembered being terrified by having to appear on Johnny Carson’s show, knowing that Carson liked clever “one-liners” from his guests. “Nervous as hell on the night of the show, I got called to go on,” he told Merrell. “After the introduction, I sat down and Carson asked, ‘How’s it feel to be an instant smash?’ Then I delivered my rehearsed reply, ‘Better than a shot in the mouth.’”
While in Ridgefield he also did a stint as a visiting professor of creative writing at Colorado College. He moved back to the city around 1976.
Kahn went on to write more than 20 books — many still in print — including,
Kahn died in February 2020 at the age of 92.
Over his years of covering the game, Roger Kahn made many friends among the old-time ballplayers but few were as close as Early Wynn, a hard-drinking, Hall of Fame pitcher who was a longtime Yankee nemesis.
In 1973 he told The Press’s Merrell that Wynn was a good writer who did a regular column for the Cleveland Plain Dealer. Editors at the Saturday Evening Post wanted Kahn to get his friend to write an article about the 1959 World Series between Chicago White Sox and the Los Angeles Dodgers (in which Wynn was 1-1). They offered Wynn $1,250.
Wynn did the piece but when the Post editors insisted on his rewriting it, the pitcher balked and told Kahn he wanted $1,500.
“I called the editors, told them Wynn wanted more money, and got him $2,000,” Kahn said. “He’s bought my drinks ever since.”
at April 30, 2020