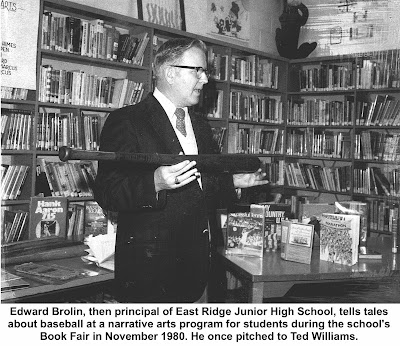 Edward Brolin:
The Principal Who Pitched
to ‘The Splendid Splinter’
Ed Brolin loved being a teacher and a principal. But get him talking about baseball and he sparkled. Brolin had, after all, come close to being a professional ball player and had — as a teenager — pitched to one of the greatest hitters of all time.
A native of Boston, Edward M. Brolin was born  in 1930  and graduated from Bridgewater (Mass.) State Teachers College with a degree in biology, later earning a master's from Fairfield University. During the Korean War,  he served in the Marine Corps.
After a period of working as an insurance investigator in the Boston area, he turned to education and in 1963 took a job teaching biology at Ridgefield High School on East Ridge.
“I came to Ridgefield because it was a good place to teach, to live and to raise my family,” he said in a 1990 interview. “I’ve never been sorry for that decision.”
In 1966,  Brolin was named the Jaycees “Outstanding Teacher of the Year.” He was elected president of the Ridgefield Teachers Association a year later.
Brolin became chairman of the science department at Ridgefield High School in 1968.  Two years later, he was named assistant principal of the school, but only a few months after that appointment, he became principal of East Ridge Junior High School (today a middle school).
Brolin led the junior high for 13 years, including a difficult period in the 1970s when it was the most overcrowded school in the system — some 1,300 seventh and eighth graders were packed into a building designed for about 850. The school system had more than 6,000 students back then — the systemwide enrollment today is about 4,000.
Because of his background as a teacher and administrator at the high school,   Brolin was named chairman of a committee that planned the use of the “new” high school that was about to open in 1972 on North Salem Road. He served on many other curriculum and administrative committees, and headed the Ridgefield Administrators Association for 10 years, often negotiating contracts.
Around 1984, Brolin moved to the high school, serving as assistant principal until his retirement in 1990.
When he announced that retirement, he told an interviewer he felt the best part of his career was working with the students, parents and teachers. “Deep down,” he admitted, “I hope they’ll miss me just a little bit.”
“We’re going to miss him,”  said Guidance Counselor Arlene Heissan. Besides providing “the best advice,” she explained, “he cares about kids and the faculty.”
Ed Brolin died in 2002 at the age of 71. He and his wife Mary, a former elementary school teacher who died three years later, had lived on Walnut Grove Road where they raised three sons.
An avid sportsman and collector of sports memorabilia,  Brolin had been a top college baseball player who was once scouted by the Boston Red Sox. When he was still in high school in 1948, he was invited to a tryout with the Sox at Fenway Park. There, he was given the opportunity to pitch to Ted Williams.
“He hit a couple that I think are still going,” Brolin said during a 1983 interview at a Ted Williams appearance in Greenwich. “But it’s something I’ll remember for the rest of his my life.”
He also remained a lifelong Sox fan.
In Ridgefield, Brolin shared with kids his love of baseball by serving as a coach in both Little League and Pony baseball. His first team, Ridgefield Savings Bank, became the undefeated Little League champion that year.
at April 20, 2020