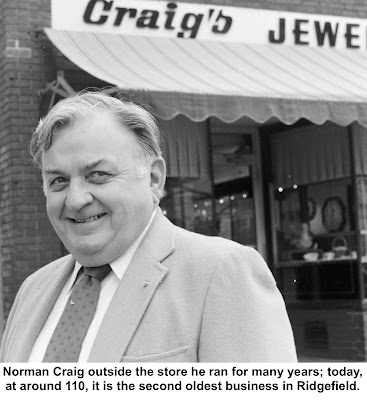 Norman Craig:
‘Stormin’ Norman’
“They used to call him the best-dressed fireman, because he always wore a shirt and a tie,” said Elsie Fossi Craig.
Her husband Norman, longtime owner of Craig’s Jewelry Store, was an active volunteer fireman for 15 years. When a call came in, he’d have to politely ask customers to leave, lock up the store, and run to the fire station to drive the second truck.
Born in 1927 in Bronxville, N.Y.,  Norman David Craig grew up in Scarsdale, N.Y., After graduating from high school and moving to Ridgefield in 1946, he joined the U.S. Marine Corps for two years and then began watch-making studies. He entered the jewelry business in 1950, when his mother, Helen Craig, bought the 40-year-old jewelry store of Francis D. Martin, then located near today's Roma Pizzeria. Seventy years later, at around 110, Craig's is the second oldest local retail business in Ridgefield  (only Bissell’s is older).
In 1951, he and Elsie Fossi – who had been Mr. Martin’s secretary for nine years – were married. While  Craig technically retired in 1983, he continued for many years to help at the store, which was taken over by son William and daughters Karen Petrini and Lori Corsak.
Craig had the rare distinction of having been a member of both the Democratic and Republican Town Committees. He started out a Republican, and served on that town committee and on the Board of Tax Review. A Democrat during the administration of his brother-in-law, First Selectman Louis J. Fossi, he served on various town study committees, was a delegate to the 1978 Democratic State Convention and was almost elected state representative in 1981.
Later in life, he returned to the Republican fold, and in 1998, won a seat on the Board of Finance.
His community service was extraordinary. He was an incorporator of the Visiting Nurse Association and the Boys and Girls Club, trustee of the Family Y, an assistant chief and president of the Ridgefield Volunteer Fire Department, director of the old Teen Center, Boy Scout scoutmaster, president and founding member of the Kiwanis Club, a founder with Clarence Korker of the Chamber of Commerce, and a sponsor of many Little League and other youth sports teams.
He was a member of the American Legion and helped plan countless Memorial Day parades — and invariably marched in them, sometimes with the Legion and sometimes with the Knights of Columbus.
A devout Catholic, Craig served on the St. Mary Parish advisory board, its fund-raising committee and as an acolyte, and was a grand knight of the Marquette Council Knights of Columbus. He was also a supporter of Immaculate High School in Danbury, where he served on the original fund-raising committee that helped build the school, was president of the parents club and was a recipient of the lifetime achievement award.
For relaxation, Craig loved golf — and colorful golfing attire. He once remarked, “The Ridgefield Golf Course, I think, is one of the best things this town has done, as far as athletics is concerned for adults and kids — it gets a lot of play.”
All this activity helped earn him the Chamber of Commerce Public Service Award in 1986 and Kiwanis Citizen of the Year Award in 1990.
It also earned him the nickname, Stormin’ Norman.
business leaders Craig's Jewelry Store Democrats Francis D. Martin golf jewelers Louis Fossi Main Street Norman Craig Republican party Ridgefield history