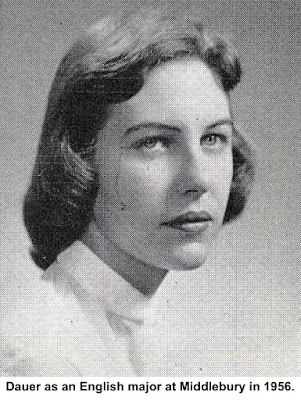 Rosamond Dauer:
Bullfrog’s Mother
“Excuse me,” says the little voice to the woman walking down Main Street, “but aren’t you Bullfrog’s mother?”
“Why, yes I am,” replies the woman.
A young girl smiles, thanks her and runs off to tell her friends she just talked to the lady who wrote some of her favorite books.
She was one of many children in the last third of the 20th Century who enjoyed the tales  of Rosamond Dauer, a Ridgefield writer, editor and mother. But writing children’s stories was not a career Dauer had contemplated as an English major at Middlebury College.
Rosamond Mueller Dauer was born in 1934 in New York City. After graduating from Middlebury in 1956, she taught advanced writing, literature and drama at Colby-Sawyer College and then took a job with Grolier publishing as an editor of the Encyclopedia Americana. Later she became curator of education at the Staten Island Institute of the Arts.
After she married John Dauer, head of a leather supply company, and had two children, she stopped writing for others and began writing for herself.  However, she said in a 1980 interview, “when I started writing again, it was poetry.”
Her poems were published in Poetry, Yankee, and other periodicals.
Then she started doing humorous poems for kids — and her own two boys, Matt and Chris, thought they were pretty funny. That, in turn, led to stories for children and, with the help of illustrators, books for children.
The first was Bullfrog Grows Up, inspired by the boys’ bringing home a frog in a bucket captured from a pond near their house on Olmstead Lane. She made them return the frog, but turned their find into a story about a family of mice adopting a small frog that winds up growing many times larger than the mice — and even their mouse house.
It was followed by Bullfrog Builds A House and Bullfrog and Gertrude Go Camping.

Other tales included My Friend, Jasper Jones, about a child who gets tired of cleaning up after his make-believe friend, and Mrs. Piggery Snout, about  “the mess and confusion her family creates at home [that] keeps Mrs. Piggery Snout from writing her newspaper column, until she takes some drastic measures.”
Another book was also inspired by her sons. “My kids think our cats are too big and I thought, what if a cat started to grow and just got bigger and bigger and bigger,” she said. The result was The 300 Pound Cat, which one critic called “fun for grownups, with great sound effects for reading to little ones.” 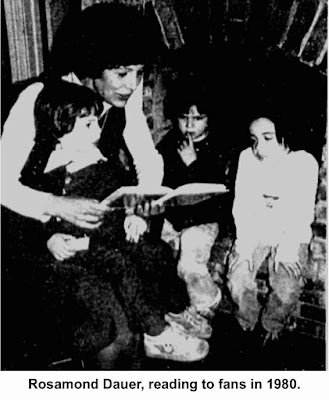 Dauer was also interested in antiques and old houses — she lived in an 18th Century farmhouse on Olmstead Lane from the mid-1970s to the early 1980s. She retired from writing books in the mid-1980s and, over the subsequent years, lived in Massachusetts, New Hampshire, and Florida where she was active in volunteering in schools and libraries.

She died in 2014 at the age of 79.
While Rosamond Dauer had written a half dozen children’s books, her favorites were the Bullfrog series.
“I’m now getting paid for doing things that used to get me in trouble when I was a child, being an oddball, a non-conformist,” she said of their story lines. “I harness in words the same fantasy life I had as a child.”
And, she added, “there is a large child lurking within me that’s not going to give up.”