Robert Blume:
A Hero with Roots
Ridgefield was in Robert Blume’s blood. But the boy whose ancestors helped found the town had too few years to enjoy the community. 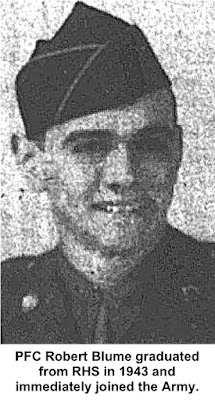 In 1708, Jonathan Rockwell joined two dozen other men from Norwalk and Milford in founding  Ridgefield, building his house on Main Street a little north of today’s  Keeler Tavern.   After the Revolution, some of Jonathan’s family joined many other New Englanders in moving to western New York state in search of more open and less rocky land to farm.
A century and a half later, a great great great great great great grandson of Jonathan Rockwell was born in Ithaca, N.Y.  Happenstance would lead him to the town of his ancestors. Tragically, it would be his last home, for Private First Class Blume was among some 20 Ridgefielders who lost their lives in World War II.
Robert Nichols Bloom was born in 1925, a son of Adrian F. and Jeannette Nichols Blume. His mother was a direct descendant of Jonathan Rockwell; his father, a World War I Army veteran, was a college-educated landscape engineer. The family came to Ridgefield in the mid-1930s when Adrian took a job as a foreman with the huge Outpost Nurseries operation here.
Young Robert was a Boy Scout and a member of the Fellowship Group at the First Congregational Church. He graduated from Ridgefield High School in June 1943 and the very same month, joined the Army.
He was sent to Iowa State University for a specialized Army training program there — his name appears on a plaque at the Iowa State Memorial Union, honoring students who died in the war.
Private Blume became a radio operator and was sent to Europe with the Fifth Infantry Division of General George S. Patton’s Third Army. He fought in the Battle of the Bulge  and was in Luxembourg when, on Feb. 10, 1945, he was killed in action. He was only 19 years old. 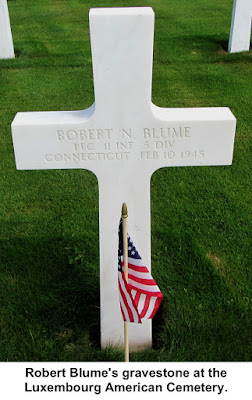 Blume was posthumously awarded the  Bronze Star with One Oak Leaf Cluster and the Purple Heart. According to his Bronze Star citation, “Private Blume, a radio operator, volunteered to go forward over exposed terrain which was under enemy artillery and mortar fire to clear an enemy machine gun emplacement which was bringing devastating fire on our troops. Despite the danger involved, Private Blume succeeded in making his way forward and silencing the weapon. On his return he was fired upon by an enemy sniper. While in search of the sniper he was killed by another sniper. His courage and devotion to duty was a great inspiration to all men of his company and reflects greatly upon himself and our armed forces.”
PFC Robert Blume is buried in the 17-acre Luxembourg American Cemetery and Memorial alongside 5,000 other American soldiers, including his commander, General George S. Patton.
His parents were also buried in a military cemetery — Adrian, who died in 1963, is interred along with his wife at the Fort Sam Houston National Cemetery in San Antonio, Texas.