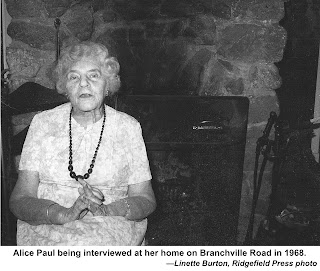 Alice Paul:
Equal Rights for Women
After she turned 90 in 1975, Alice Paul, co-author of the Equal Rights Amendment, showed a reporter a red, white and blue doll.
“This is Miss Liberty, who didn’t get her liberty in 1776,” Dr. Paul said. “If you are going to have liberty, you have to have what the ERA is – an equality in everything about earning a living, everything in the economic life of a woman.”
One of the nation’s most famous women's rights advocates and a part-time Ridgefielder for 40 years, Dr. Paul was then living in Altnacraig convalescent home on High Ridge. The next year, she returned to her native New Jersey, where she died in 1977. 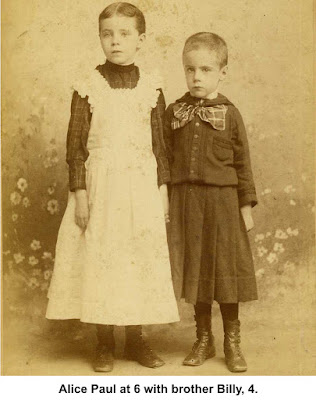 Alice Stokes Paul was born in 1885 in Moorestown, N.J., at “Paulsdale,” a large farmhouse that is now a museum devoted to her life and legacy. Her banker father and suffragist mother were both Quakers who promoted equality for women in work and education. “When the Quakers were founded…one of their principles was and is equality of the sexes,” Paul said years later. “So I never had any other idea…the principle was always there.” 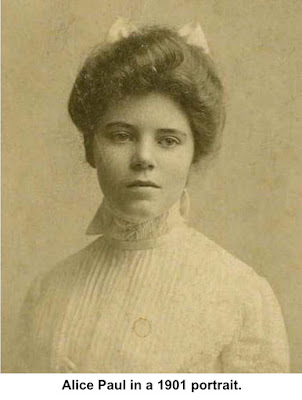 After graduating first in her class from a private school,  Paul attended Swarthmore College, then a Quaker institution, one of whose founding supporters was her grandfather. Over the years she earned a half dozen bachelor’s, master’s and doctoral degrees in social work as well as the law. “I took law so I would be more able to help our cause,” she told Linette Burton of The Ridgefield Press in a 1968 interview. That cause was women's rights, no doubt influenced by that Quaker heritage.
After two years as a social worker in New York City, she went to Great Britain in 1907 to study and joined suffrage campaigns of Emmeline Pankhurst and her daughters. She was jailed three times in England. 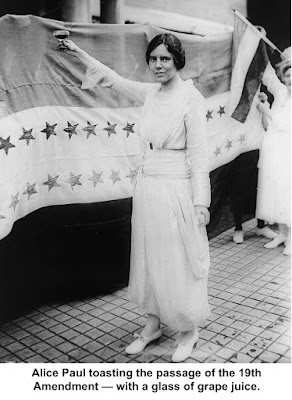 Returning to the States in 1912, she “breathed new life into the ebbing suffrage movement,” her Press obituary said. The National Woman Suffrage Association sent her to Washington, D.C., to direct its campaign for a federal suffrage amendment. She led protests and marches, the most famous of which was in 1913 on the night before Woodrow Wilson’s inauguration, when 8,000 women marched down Pennsylvania Avenue. (Wilson at the time opposed a Constitutional amendment to allow women to vote.)
Paul founded the National Woman’s Party in 1916 and the following year, she and 16 others at a rally were arrested for obstructing traffic and sentenced to six months in a workhouse.  When they went on a hunger strike, the women were force-fed and moved to a psychopathic ward as a way to discredit them. Their treatment sparked a public outcry, and 22 days after their arrest, they were freed. 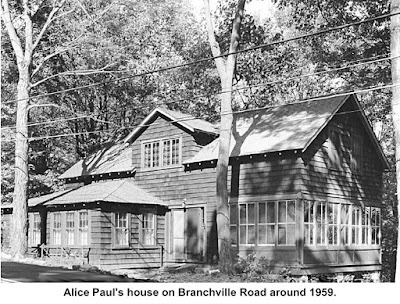 A year later, President Wilson gave his support to suffrage but it took two more years for the Senate, House, and the required 36 states to approve the Constitutional amendment.
Having a part in the passage of the 19th Amendment “was the most useful thing I ever did,” Paul said.
Recalling these years in the 1975 interview, Dr. Paul mentioned the song that imprisoned women used to sing, at first in England.  “It was ‘shoulder to shoulder, friend to friend,’” she said.  “We brought it back to this country when we came. And any time anybody went back to prison, we always took our song along.”
In 1921, Dr. Paul and Crystal Eastman drafted the Equal Rights Amendment, aimed at guaranteeing equal treatment for the sexes.  It stated simply: “Equality of rights under the law shall not be denied or abridged by the United States or by any State on account of sex.”
Starting in 1923, the ERA was introduced into every session of Congress till 1972 when it was finally passed and sent to the states for ratification. Only 35 of the needed 38 legislatures ratified it,  the congressional approval expired, and the ERA failed to be adopted. (Current efforts to pass an ERA amendment seem to be in legal limbo.) 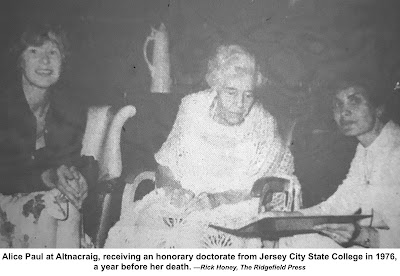 In 1938 Paul founded the World Woman’s Party that successfully pressured for an equal rights pledge in the United Nations charter.  Two years before her 1977 death, she expressed her disappointment that the Equal Rights Amendment had not been adopted. “The great victory was getting the vote,” she had said. But “it’s unthinkable that we can’t complete it with economic equality.”
Dr. Paul had a home at 513 Branchville Road from the 1930s until 1976. Overlooking John’s Pond, the place was chiefly a retreat where she could rest from her busy work schedule in Washington.
Alice Paul is widely recognized today, especially on the occasion of the centennial of the 19th Amendment. “Few individuals have had as much impact on American history as has Alice Paul,” says the Alice Paul Institute, an organization headquartered in her Moorestown birthplace that promotes her legacy and her life’s work for gender equality. “Her life symbolizes the long struggle for justice in the United States and around the world. Her vision was the ordinary notion that women and men should be equal partners in society.”
Paul has also been recognized in a singular way: She is among the very few American women whose face appears on both a U.S. stamp and a U.S coin. And her numismatic commemoration came about in a rather unusual fashion. 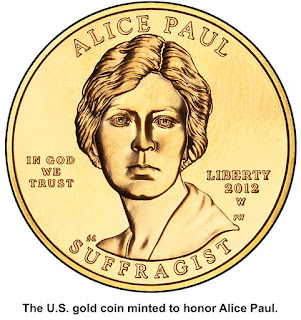 In 2007, the United States Mint began producing what it called “the First Spouse Coins.” Each was aimed at honoring the wife of a president, and each was issued at the same time their husbands were honored on circulating $1 coins, minted in the Presidential Coin Series. A problem was that some presidents had no spouses when they were in office. One was Chester A. Arthur, whose wife, Ellen, had died in 1880, a year before he took office. In seeking a woman appropriate as a “first spouse” coin corresponding to Chester Arthur, mint officials picked Paul, who was never a spouse to anyone, much less a president, and who spent much of her most active years battling presidents like Woodrow Wilson. The mint explained that she was “a leading strategist in the suffrage movement, who was instrumental in gaining women the right to vote upon the adoption of the 19th Amendment and thus the ability to participate in the election of future presidents.”  The mint added a second reason: She was born on Jan. 11, 1885, during the term of President Arthur. 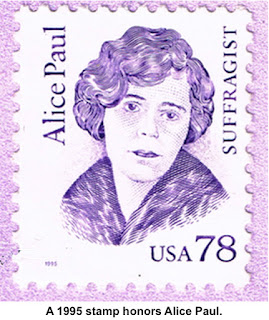 In 1995 Paul had been honored on a 78-cent stamp. That 78 cents was the amount needed to mail a three-ounce letter, and prompted a Philadelphia Inquirer writer to note an irony: “Paul was a diminutive little woman of 90 pounds, and she appears on a stamp that goes on oversized, overweight mail of the 3-ounce variety.”
There were 100 million copies of her face printed on that stamp, while only 13,000 of the gold coins were struck. Alice Paul would have probably been embarrassed by all those paper and gold faces — she had always promoted  the “cause,” never herself.
at April 20, 2020