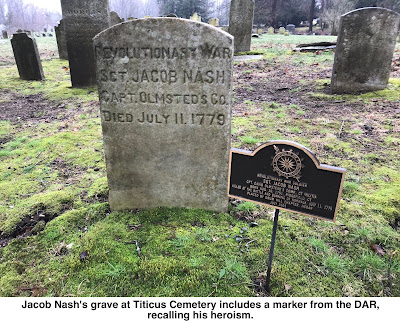 Sgt. Jacob Nash:
Murdered By Redcoats
Memorial Day is a most fitting time to remember a Ridgefielder whose murder by the British during the Revolutionary War has been largely forgotten.  Sgt. Jacob Nash was killed in 1779 while trying to defend Norwalk, the home of his ancestors and where some of his descendants later settled. He wasn’t just shot, he was stabbed to death — while his hands were tied.
Though at least eight Ridgefield soldiers died during the war, Nash may be the only one confirmed to have been killed in a battle.
As is the case with so many colonial residents, relatively little is known about Jacob Nash. He was born here in 1751, a son of Abraham and Rhoda Keeler Nash, farmers who had come from Norwalk with the early settlers. He grew up in town, married Freelove Keeler of Ridgefield in 1771 and a year later, they had a son, Jacob Jr. Freelove (the name projected the idea of freely giving the virtue of love) died in 1775, possibly in childbirth.  About two years later, Jacob married Phebe Kellogg of Norwalk.
Some sources say Jacob and his family moved with other members of the Nash clan to Ballston, N.Y., but returned to this area around the beginning of the Revolution because they feared attacks by American Indians allied with the British.
After the war broke out, Jacob joined the Continental Army. By January 1776 he was a corporal.
In July 1779, he was on furlough, visiting his family in Ridgefield, when news arrived that Major General William Tryon and about 2,600 British troops were attacking and burning coastal towns, including Norwalk. Nash joined a company of local militia, led by Capt. David Olmsted, and headed for Norwalk. There on July 11, he was fighting the invaders during the “Battle of the Rocks,” the largest of several engagements collectively called the Battle of Norwalk, when he was captured and executed by the enemy.
General Samuel H. Parsons, who commanded Continental forces during the Battle of Norwalk, told General George Washington that Nash “was found dead with his Hands bound together & pierced with Bayonets, no Shot having ever entered any Part of his Body.” Another account says his body had seven stab wounds.
Jacob Nash was 28 years old.
It is unclear why the British would have killed a captive that way, but a number of deaths by bayonetting were reported during the war. Lambert Latham, a 13-year-old black soldier fighting at Battle of Groton in 1781, died after being stabbed 33 times by British troops.
Tryon’s attack was devastating — General Washington described Norwalk as “destroyed.” The British burned 80 houses, two churches, 87 barns, 17 shops, and four mills. Oddly enough, casualties were few; some accounts say Nash was the only American killed in the battle. Another report said he and one other died.
British casualties, however, were higher and, in a touch of irony 50 years after the war ended, Daniel Kellogg Nash, a grandson of Jacob Nash, was digging on his farm in the Flax Hill section of Norwalk when he uncovered the skeletons of three British soldiers. They had been killed in the same battle in which his grandfather had fought and died.
Jacob Nash’s death in the Revolution might have been almost completely forgotten, were it not for Norwalk historians Ed and Madeleine Eckert, who uncovered and researched his story about 25 years ago. And in 2005, the Drum Hill Chapter of the Daughters of the American Revolution (DAR) placed a special marker at the Titicus Cemetery grave of Jacob Nash, the only Revolutionary veteran’s grave in Ridgefield so honored.
Of the hundreds of Ridgefielders who served in the Revolution, Nash appears to be the only one known to have been killed in combat. Two others died in British-held prisons, one froze to death at Valley Forge, another succumbed to an illness, and four died of unstated causes during their service.