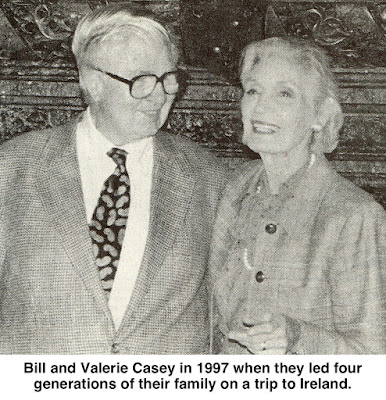 William H. Casey:
Civic Businessman
For half of the 20th Century, Bill Casey was a leader in  the business, civic and social life of  Ridgefield. A soft-spoken man who often wore a smile, Casey founded a company that still bears his name and is still led by his family 70 years later.
Born in Manhattan in 1917,  William Henry Casey grew up on Long Island and graduated from Lehigh University, where he was president of the Class of 1939. The same year he graduated, he married Valerie Dyer, a New York City native who was raised in Montreal, Canada. They were wed at St. Patrick’s Cathedral.
Casey worked for several oil companies before deciding to start his own business. In 1947 they moved to Ridgefield, living at first in the Bluebird Apartments on West Lane.
He began a fuel oil business in 1949  (just three years after native sons Frank and Fred Montanari started the town’s other still-thriving family-owned oil business, Montanari Fuel).
Four years later the Casey family moved to an 18th Century Main Street homestead that has 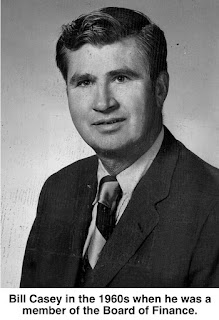 served as their house but also their office for nearly 70 years. Over those years Casey Fuel has expanded with the acquisition of the heating oil businesses of Ridgefield Supply, Outpost Supply and Venus Oil, added a propane service, and rebranded itself as Casey Energy. The company was led by his son, Michael, starting in 1976, and today is in the hands of grandson, Shane.

In 1961, Bill Casey opened a real estate end of the business and was long active in the realty community, serving in 1967 as president of the Ridgefield Board of Realtors. In the early 1960s,  Casey also owned an Esso gasoline station and paint store on Danbury Road, now the quarters of Marty Motors.
Casey was always active in the civic and community life of Ridgefield. A longtime member of the Board of Finance, he also served on the Board of Tax Review.  In 1971 he tossed his hat in the ring for the job of first selectman, but then bowed out in favor of Joseph J. McLinden, who won the job.
He was chairman of the Republican Town Committee, and worked on dozens of campaigns over the years. He served as a director of the Community Center and a trustee of Danbury Hospital.
And he held the distinction of being the longest, continuous, still-resident member of the Ridgefield Lions Club. Casey joined the club on Nov. 1, 1948, and had served as the club president a few years later. All presidents had a special project to accomplish and his in the early 1950s was something that seemed more out of the inner city than suburbs: Building showers on the front lawn of the Community Center for the town’s children.
“This was before air conditioning and since there was no place to swim then, we put in 10 showers,” he told a 1996 gathering honoring his 50th anniversary with the Lions. “The kids were there on all the hot summer days.”
Soon after he and other Lions helped Francis D. Martin create Great Pond’s swimming beach — today’s Martin Park.
An avid golfer, Casey was one of the longest-term members of the Silver Spring Country

Club. There, he was a founder of the infamous Poison Ivy League, a group of local golfers that included such prominent businessmen and attorneys as Judge John E. Dowling, Alex Santini, Judge Joseph H. Donnelly, Edward Hyde, and Judge Reed F. Shields.

He was also interested in his family’s Irish roots — both his and Valerie’s ancestors came from Ireland. In 1997, 18 members of the Casey clan — representing four generations —  traveled together to Ireland for a 10-day trip that included visits to many ancestral sites of both the Casey and Dyer families.
Bill Casey died in 2002 at his home on Main Street at the age of 84. He left behind one of a handful of Ridgefield businesses that have involved multiple generations of a family and that survive and thrive today. Others besides Montanari Fuel include Ridgefield Supply, Ridgefield Hardware, Neumann Real Estate, and Ancona’s Wines and Liquors.