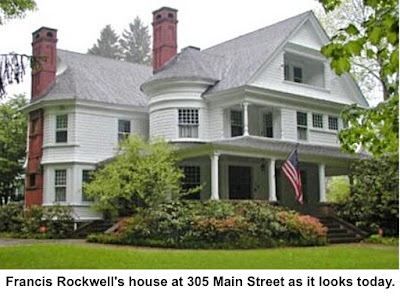 Francis Rockwell was a man of many talents who led what his obituary called “a prominent, useful and well-rounded life.” He was an inventor, an industrialist, a pomologist, and a winemaker. His metallic products were used throughout the nation — many are now well known in the antiques world — while his liquid products were consumed,  apparently with pleasure,  throughout the region, including New York City.

A member of one of the founding families of Ridgefield, Francis Asbury Rockwell was born in 1818, a son of a local cabinet-maker. In 1840 he married Mary Lee, who also had deep roots in the community and was a daughter of a local Revolutionary War captain.

Unlike his father, who was known as Uncle Tommy, Francis was more interested in metal than wood early in his career. He and his brother, John Wesley Rockwell, founded in the 1840s a company that at the beginning produced tin candlesticks but eventually expanded into many other products, all wrought of not only tin, but also iron and brass. 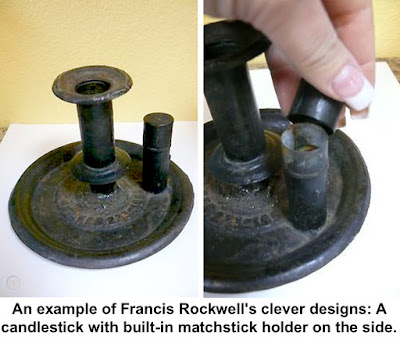 Francis Rockwell was not satisfied producing ordinary candlesticks and came up with many innovative variations, several of them patented. One was a design with a spring inside a candle-holding tube that forced the candle upward as it burned. Another had a canister to hold matchsticks attached to the candlestick base.

Their line of products expanded to include tools such as augers and drill bits; small farm implements, like hog scrapers (used to remove hair from the hide of butchered pigs); and even newspaper holders, devices from which periodicals were hung on a rack in a library reading room, making issues easy to display, remove, read, and replace.

One of the more usual Rockwell products was a “letter clip,” an ornate gadget that people  could use to hold small piles of letters together. Those were the days when letter-writing was not only popular, but almost an art. The clip could lie on a desktop, holding missives awaiting responses, or it could, hung from the wall near the front door, hold completed letters waiting to be taken to the post office. 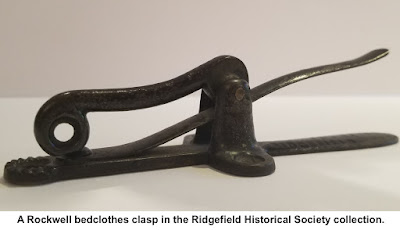 A bedclothes clip Francis invented received wide attention in newspapers around the country. For instance, the Fayetteville North Carolinian reported in 1850, “A Yankee named Rockwell, of Ridgefield, Conn., has invented a little clasp, to be attached to bed rails, to keep the bed clothes from being removed by restless children, or others. It is no doubt very useful in cold weather.”

The Rockwell brothers started their manufacturing on Main Street in a small factory across from today’s First Church of Christ Scientist that later became the site of the Bailey Inn. They then moved to Catoonah Street, and twice had their facility heavily damaged by fire.  One of their buildings was called Catoonah Hall, which led to the road’s being called Catoonah Street. 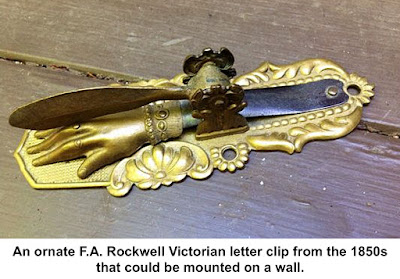 Soon after the loss of Catoonah Hall to an 1868 fire, the Rockwell brothers decided to pursue different paths. John focused on turning his father’s homestead and woodshops into the Elm Shade Cottages, forerunner of The Elms Inn, on northern Main Street. Francis retired to his home at 305 Main Street, today often called “Red Chimneys,” to pursue pomology — the science of fruit.

Francis Rockwell’s earlier interests had not been entirely machined products.  As distant cousin and historian George L. Rockwell wrote, he was “interested greatly in the culture of fruit and products of the soil.”

Combining his knowledge of industry and of the fruit, Rockwell in the 1850s had begun manufacturing wine, both from grapes and from blackberries. At least some of his products, however, were probably not the sort one would consider “wine” today, but were more like sweetened fruit juice. It appears that his widest selling varieties were non-alcoholic, and were particularly appreciated by clergy for use as sacramental wine.

Thus, it was not surprising to find that The Church Journal, a 19th Century Episcopal newspaper circulated nationally, carried an 1859 article about Rockwell’s wines, heaping praise on the concoctions which it called “pleasant to the taste and genuine in manufacture.” 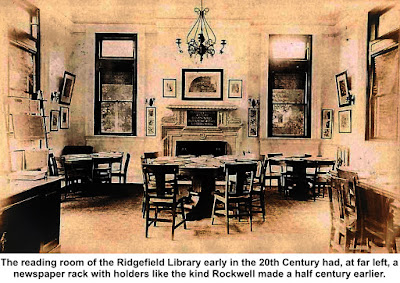 The Journal went on to say, “the Rev. Mr. Williams, rector of St. Stephen’s, Ridgefield, who has lived next door to Mr. Rockwell for the last six years, vouches for the purity of the wines from personal knowledge and observation, and specially commends some of the varieties for sacramental purposes.” (The description conjures up images of Messrs. Rockwell and Williams sitting on a back porch, conversing while sampling some of the less sacramental and more potent varieties!)

The New-York Tribune gave Rockwell’s wines even more news coverage, but was somewhat less exuberant. “It undoubtedly is pure, so far as any admixture of alcohol is concerned, but it is not pure grape juice, because it has a large admixture of sugar, which in our opinion is of no more advantage, and for which there is no more necessity.”

Nevertheless, The Tribune added that “the taste of this wine will please the mass of wine-bibbers.” 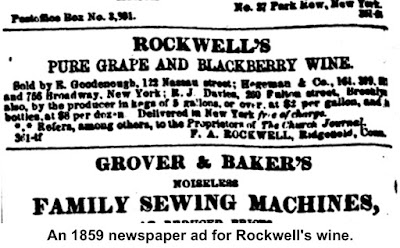 It also pleased judges at The American Institute of the City of New York for the Encouragement of Science and Invention, which awarded him a gold medal for the best Native Grape Wine and a silver medal for best Blackberry Wine in 1859. (For many years Gulden’s mustard had a copy of its American Institute Gold Medal Award shown on its jar label.)

For a while at least, Rockwell must have been producing a lot of wine because he was advertising “Rockwell’s Pure Grape and Blackberry Wine” in such publications as The Church /Journal as available in kegs of five gallons or more, for $2 a gallen. Bottles were $8 a dozen.

How long he kept up his winemaking is unknown, but during the Civil War, Rockwell was conducting business in Washington, D.C., where he was probably supplying small devices for the war effort. There he was also active with Connecticut’s efforts to aid wounded soldiers and, so doing, “he found greater opportunities for developing his love for his fellow man,” said The Ridgefield Press.

In retirement he focused on his interest in pomology.  At his Main Street home opposite Market Street, he planted many varieties of pear and apple trees, and was a proponent of the little known Baker apple, a variety discovered a century earlier by Ridgefield physician Dr. Amos Baker.

“As a cooking apple, from its half-grown state until the time of its decay, it probably has no superior,” Rockwell said of the Baker apple. “As a market apple, its appearance and quality commend it to the good sense of the apple merchant, who always finds for it a ready market at the highest price.” He added that the fruit, yellowish striped with crimson, was “very tender, middling juicy, with a subacid pleasant flavor.”

Rockwell died in 1881 at the age of 63. “He has in one short week been stricken down from the full health and vigor of manhood, but as his whole life has been only an apprenticeship to a higher, he passed away entirely prepared, and in the full possession of his faculties to the last,” The Press said of his unexpected death.