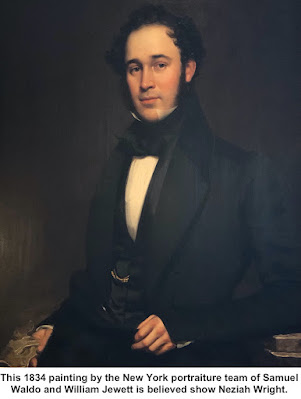 Anyone who has ever been a stamp collector will instantly recognize the pair shown here: They are the very first two United States postage stamps, and were issued in 1847.

Along the bottom edge of each stamp are the initials R.W.H.&N. The W stands for a man whose mortal remains are spending eternity in Ridgefield, but who probably never lived here — though he had a close attachment to the town.

Neziah Wright was born in 1804 in Grafton, N.H., where his father was a local physician. The family soon moved to Bradford, Vt.

Little is known about his early life but by the 1820s he was in New York City, working as an engraver. In 1828, he and Freeman Rawdon established an engraving firm that soon grew into Rawdon, Wright, Hatch & Edson, a leading producer of bank notes, bonds, and other finely engraved printing.

On March 3, 1847, a federal act authorized the postmaster general to use postage stamps for the prepayment of postage on letters. Within two weeks Rawdon, Wright, Hatch & Edson had submitted a proposal to design and print those new postage stamps, and they quickly got the contract.

The result was the 5¢ Benjamin Franklin and 10¢ George Washington issues that went on sale in New York on July 1, 1847. Franklin was the first postmaster general, appointed by the Continental Congress in 1775, and Washington, the first president. 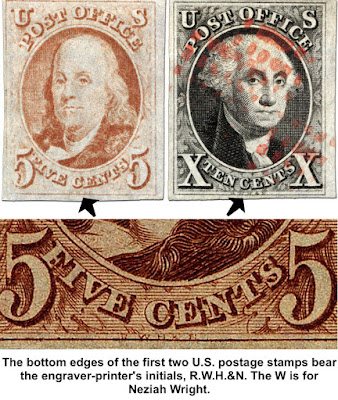 Some three million of the five cent stamps were printed and 863,000 ten centers. Back then postal rates were determined both by the weight and the distance that the letters had to travel. Letters going 300 miles or less were 5¢ per half ounce;  over 300 miles were 10¢ per half ounce.

Wright’s company continued to merge with others, but held majority control when it became the American Bank Note Company in 1858, with Wright as its first treasurer. The company created not only the first stamps, but the first paper money, called “greenbacks,” issued by the federal government in 1862.

A close inspection of the first greenbacks shows why American Bank Note was considered an expert in producing currency that was difficult to counterfeit. In fact, Neziah Wright had been a co-author of a book,  New Security for Protecting Bank Notes from Alterations & Photographic Counterfeits, published in 1858. 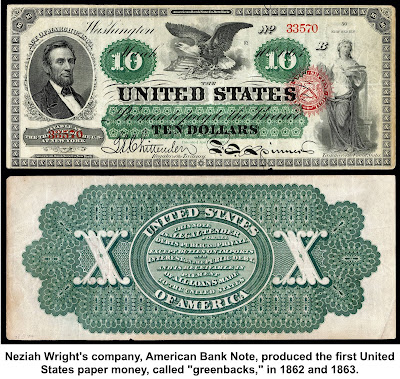 By the 1860s, Wright was considered a leading businessman in New York City. In his 1875 History of Bradford, Vt.,  the Rev. Silas McKeen quaintly describes  Neziah Wright as “a man well-known and highly esteemed in financial and commercial circles, who is said to possess a sufficiency of wealth, acquired by fair and honorable means. The amiable and excellent wife of Mr. N. Wright, deceased some years since, leaving no child but a virtually adopted daughter, Jane [sic], a worthy young lady, who married Mr. Phineas Lowndesbury, of Ridgefield, Ct., a gentleman worthy of such a wife.” (McKeen had some problems with names; the adopted daughter was Jennie, not Jane, and Phineas was Lounsbury, not Lowndesbury.)

Therein lies the Ridgefield connection. Phineas Lounsbury was born in 1841 on the family’s Ridgefield  farm, The Hickories, in Farmingville.  After the Civil War he was running a shoe factory in New Haven, later in Norwalk, reports Lounsbury historian  Jeremy Main. “Phineas built ties with the New York banking society and sealed them by marrying Jennie Wright, daughter of Neziah Wright, a founder and treasurer of the American Bank Note Co.,” said Main. That wedding occurred in 1867.

Jennie and Phineas lived on Main Street, eventually building Grovelawn, the mansion now used as Ridgefield’s Community Center. When Neziah died in 1879, his will named Phineas Lounsbury as his executor. 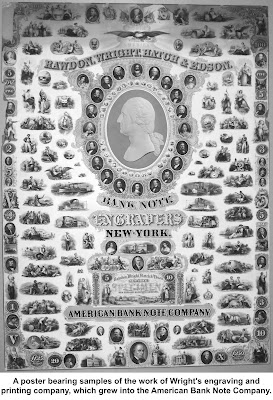 Neziah Wright must have liked Phineas Lounsbury and Ridgefield a great deal because both he and his wife — and his sister — are all buried in the Lounsbury section of the Ridgefield Cemetery. His adopted daughter is nearby, with her husband, Phineas. The huge main monument — one of the tallest in Ridgefield — is shared by both the Wrights and Lounsburys. 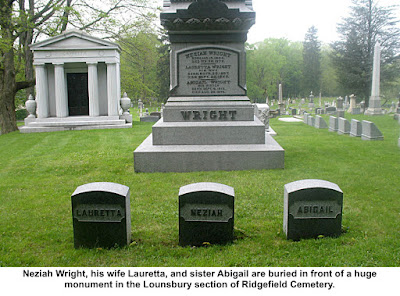 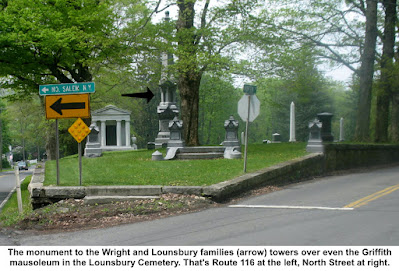 The company Neziah Wright helped to create in the 1820s is still alive today, called ABCorp, with American Bank Note as a subsidiary. While it still does fine, secure printing, the company has branched out into such fields as “dual-interface (contactless) payment debit and credit cards” and business-to-business distribution services in more than 100 countries. Its headquarters are just down the road, in Stamford, Conn.