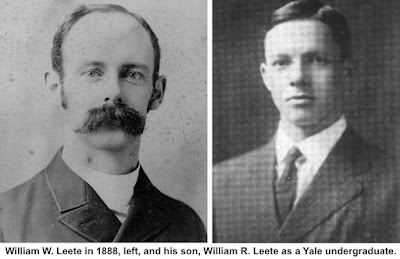 The Revs. Leete:  In the Pulpit,
Before the Class, On the Links

Two leaders in the Congregational Church — father and son — are buried together in the Ridgefield Cemetery.  Descendants of an unusual pioneer and tied to three Connecticut governors, both were accomplished ministers in different realms, and one was even a champion golfer.

William White Leete was born in Windsor, Conn., in 1854, a fifth grandson of William Leete, one of the earliest settlers in Connecticut and the only one to govern both of its colonies. Born around 1613 in Huntingdonshire, England, the progenitor William Leete became a lawyer, serving the bishop of Cambridge at a court that was investigating and prosecuting Puritans. Leete wound up agreeing with the people he was supposed to prosecute, became a Puritan himself,  emigrated to the New World in 1639, and was one of the founders of the town of Guilford, Conn. He later served as governor of the New Haven Colony and after that colony merged with the Connecticut Colony in 1664, he was elected governor of Connecticut from 1676 until his death in 1683.

Great-great-great-great-great grandson William W. Leete graduated from Amherst and like many of his ancestors, went to Yale where he earned a degree in divinity in 1880. He then continued his studies at Yale’s graduate school. In 1882, he accepted a call to the First Congregational Church in Ridgefield, his first pastorate.

Here he immediately faced a major challenge. The old “meeting house” on the green, built 80 years earlier, was falling apart and the congregation needed a new and larger church. Under his leadership, the congregation came up with a plan to build a new edifice west of the existing one — near where Jesse Lee Memorial United Methodist Church is today. Neighbors objected, however, and the plan was abandoned.

Henry King McHarg, a wealthy parishioner and descendant of an early Ridgefield minister of the church, came to the rescue, donating land at Main Street and West Lane for the new building, which was erected in 1888 under Leete’s tenure. But on his second Sunday in the brand new church, Mr. Leete gave his farewell sermon — he had taken a pastorate in Rockford, Ill., (the third Ridgefield minister to go there).

While in Ridgefield, Rev. Leete had a rather unusual interest for a 19th Century clergyman: He played baseball. “He was considered a good baseballist,” The Ridgefield Press reported at the time. And the newspaper should have known — Leete played for the Press’s own team in the 1880s.

Later in life, he became a champion golfer; for five consecutive years he won the Class A trophy for players 75 or older at the United States Golf Association tournament in Rye, N.Y. The New York Times reported that “he also excelled as a skater.”

During his pastorate here, Leete met and fell in love with Ann Eliza Rockwell — two of whose uncles, George and Phineas Lounsbury, became, like William’s ancestor, Connecticut governors. The marriage explains why, after he died in 1946 at the age of 91, he was buried in the Lounsbury section of the Ridgefield Cemetery. It also explains the name of their son,  the Rev. William Rockwell Leete, born in Ridgefield in 1886, who is buried alongside his parents at the Lounsbury Cemetery.

The younger Leete had a rather exotic career, including two years’ imprisonment. After graduating from Yale in 1908, he earned a degree in divinity from Union Theological Seminary and by 1912, was in China, working as a missionary. He spent much of his life there, including many years as a professor at the Nanking Theological Seminary in Shanghai. He also earned a doctorate in divinity during a sabbatical in the U.S.

In 1941, he was arrested by conquering Japanese soldiers, and held in a Shanghai prison camp until 1943 when his release was finally secured. He immediately headed home, only to learn that, while he had been imprisoned, his son, Lt. Jonathan Leete of the Army Air Force, had gone missing in action in the Middle East. Lt. Leete was never found.

After the war, Dr. Leete returned to teaching in China. He was forced back to the States when the communists began taking over the country. He died in Michigan in 1952.

Being fifth and sixth great-grandchildren of Gov. William Leete put the two ministers in some unusual company. Another fifth great-grandchild was John Brown, the abolitionist whose body lay “moldering in the grave” after being executed for his raid on Harpers Ferry.

Financier J.P. Morgan, one of the richest men in the world in his time, was a sixth great grandson. Even stars of stage and screen have been in the clan. Film actor Humphrey Bogart was a seventh great-grandson. A ninth great-grandson is TV comic/actor Ed Helms from The Daily Show and The Office, who was also the voice for animated films of the Lorax and, err, Captain Underpants (what would the Revs. Leete think of that?).