Marian Cox:
‘Lady of the Orchids’

“New York’s Famous ‘Lady of the Orchids’ Bares the Hidden Story of Her Fabulous Society Life.”

The headline stretched across the top of two pages of the San Francisco Examiner’s Sunday magazine in 1934 for two weeks in a row. In the two-part article, Marian Cox explained why she “seeks to bury her ‘Parasite Past’” by selling almost all of her possessions, including Stonecrest, her estate-farm along North Street in Ridgefield. 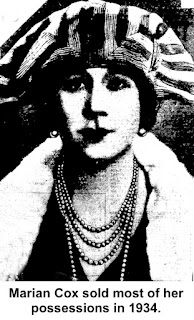 Cox, an author and feminist who was considered both talented and beautiful, may also have been one of the wealthiest women to live in Ridgefield. Married to a multimillionaire, she rubbed shoulders with the literati and the “400” in the city and entertained the likes of presidential candidate William Jennings Bryan both at both her Manhattan and Stonecrest mansions.

A daughter of a well-to-do Southern family from St. Louis, Mabel Marian Metcalfe gave her birth year as 1882, although there is some evidence she was born in 1878. In 1899, when she said she was only 16 years old, she married  Dr. John Watson Cox, a wealthy New York City chemical manufacturer who was 43.

“There was I,” she told the Examiner, “a child of 16 thrown into the mad whirl of New York society, straight from a sheltered, quiet home in the old South. Immediately I must play hostess to distinguished guests and be mistress of a 20-room mansion and 14 servants.”

She succeeded, it seems, and her mansion — which stretched from East 38th to 39th Streets in the fashionable Murray Hill section of Manhattan — became a destination. “The foremost statesmen, leaders from the field of literature and most of the social greats, frequented the Cox mansion, which was as impressive and grandiose as any in the New York of its day,” said the Examiner, which shared the story with many Hearst newspapers across the country.

In between a life of hosting parties and managing a household of 14 servants, Marian Cox started to write. She turned out several books, the first of which was The Crowds and The Veiled Woman, published in 1910 by Funk and Wagnalls. Her stories were considered feminist, featuring strong women. The San Francisco Chronicle said the book “sounded the most distinctive and ambitious note in recent American fiction.” 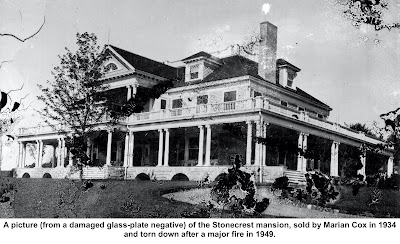 When her book, The Dry Rot of Society, was published in 1919, a male reviewer in The New York Sun called Cox “one of the few great feminine writers of English. She has a lucid style [and] she has that rare gift among women — irony. She has vision. She mocks, she scorns, she pities. She thinks without sinking into mere philosophizing...She has beautiful wisdom.”

However, Cox confessed in the 1934 article that, at Murray Hill and Stonecrest, she grew addicted to her possessions, which, she explained, gave her a sense of identity. As she became an increasingly popular hostess, they served as anchors in a sea of social events.

“I delighted in showing off my wonderful home and champagne goblets with the longest stems in New York (so I was told), jeweled Bohemian glasses, Royal Crown Leighton and Copeland china — all sorts of superlative things to make a grace of the mere animal functions of eating and drinking,” she wrote.

At least one guest did not seem to impress her. A devoted Democrat, Dr. Cox was treasurer of the Democratic National Committee and two-time presidential candidate William Jennings Bryan would often stop by their home on his visits to New York. Bryan was the famous orator, who would later add to his notoriety by opposing Darwinism in the Scopes trial.

“From my long-stemmed champagne goblets, he always drank grape juice while the rest of us drank wine, and he preached prohibition while manifesting such a Gargantuan appetite for food that he was the first person who impressed me with the truth of the adage:

“We compound for sins we are inclined to,

“By condemning those we have no mind to.”

“Bryan never drank himself into life,” she added, “but he ate himself unto death, in my inconsequential opinion.”

Dr. Cox died in 1928 and six years later, Marian Cox decided she had had enough of being saddled with millions of dollars in possessions and the responsibilities — and guilt — that came with them. She auctioned off virtually all of her furnishings and art, as well as Stonecrest.

“We possessed this city home of 20 rooms and a country home of 30 rooms and now I am wondering if I have ever had a home at all,” she said in 1934. At Murray Hill, “my salon was like frozen music, Louis 15th in style, with all its furniture reproductions of historic pieces at the palace of Versailles, Fontainebleau and Museum of the Louvre. My bedroom was a copy, even to the silk upon the walls, of the bedroom of Marie Antoinette.” 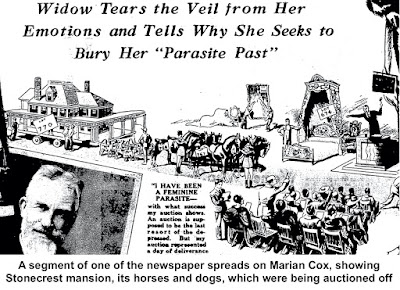 Of Stonecrest, which the Coxes bought around 1908, she said she emulated Marie Antoinette and attempted to convert the farm into a prosperous dairy. However, she admitted, she was unable to transform herself into a successful business woman.

After she left both homes  and their furnishings, Cox lived in various places until late 1940, when she returned to Ridgefield, acquiring the former home of artist George Stengel on lower Main Street.  “It seems I am only following the instinctive lure of the past in returning to Ridgefield to find the home for which I have been vainly seeking ever since I left there,” she wrote in a long essay in The Ridgefield Press about returning to town.

However, her stay was not long. During the war she met James Fay Logan, the captain of a Liberty Ship that was transporting war supplies in the North and South Atlantic, and Indian Oceans.  Captain Logan was at least 17 years younger than she. They were married in 1943 and later moved to New York City. 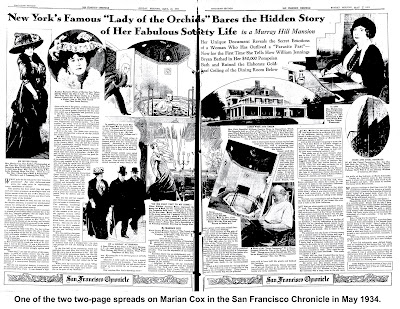 Although she spent much of her life in the limelight and seemed to thrive on publicity, Marian Cox Logan faded from the scene late in life. She apparently died in the early 1970s — her exact date and place of death has not been discovered. Captain Logan died in 1981.

In 1967, still using the name Marian Cox, she self-published her memoirs, The Sphinx Wore An Orchid. The title was a reference to her reputation decades earlier as an orchid lover. In fact, she confessed at the time she was selling her Ridgefield home, “At my country estate, ‘Stonecrest,’ in Connecticut, there was a conservatory and a gardener for the sole purpose of raising rare orchids for me. Twice a week I received a huge box of flowers for the house and orchids for myself. I was then, truly, a Lady of the Orchids.” 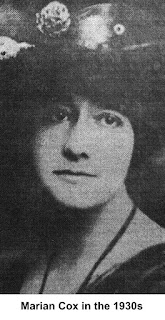 She found symbolism in her love of “such strange orchids raised solely for me. As strange as those I had seen in the botanical gardens of Buitenzorg, Java. Orchids like little tarantulas pinned to my heart. Spotted orchids like blooms corrupted by the sun. Pure orchids so white they seemed innocent of every touch of the sun. My young life in its flowery grave of solitude and splendor!”

But, she added, “this is what made me write — in a superb sublimation of sex and humanity. Four books of mine were published during this gala period, books strange as Java orchids for an American girl to write.”