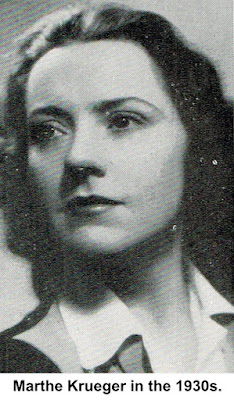 The small town of Ridgefield in the 1940s was home to many writers, artists, actors, composers, and dancers  who found here not only fellowship, but the peace and beauty of the countryside. Concert dancer, choreographer and photographer Marthe Krueger of New York City felt that the “fluidity and lyrical qualities of dance” were close to many of the qualities found in nature. In 1942, to be closer to the natural world, she set up a home and studio in The Coach House on Branchville Road, a building that would later house another dancer, an actor and a world-class art collection.

Born in Mulhouse, Alsace-Lorraine, France, in 1910,  Krueger began ballet training at the age of eight  in Strasbourg,   and went on to study in Paris and London with several dance luminaries.

She appeared on stages  throughout Europe, and upon coming to America at the age of 23 in 1933, made her debut at New York City’s Town Hall.  During the Depression, Krueger not only performed, but taught at several of New York’s finest dance schools, where she became close friends with the legendary ballerina Muriel Stuart.

She also began working with two notable composers. Classical composer Stefan Wolpe (1902-1972) wrote “Suite for Marthe Krueger,” a work for two pianos, in 1940 while  Alex North (1910-1991), a rising young composer who would become one of Hollywood’s top creators of movie scores, wrote several dance pieces for her in 1941 and 1942, including “Prelude,” “Will-O’-Wisp,” and “Trineke.”

She and North became such good friends that she invited him to teach at the school she had just established at her Ridgefield home. (A few years later, North bought himself a house in Ridgefield, using it as a weekend retreat for many years.)

“Ridgefield was selected for the establishment of a school to perpetuate her art because Marthe Krueger feels that in the hills of Connecticut, spiritual as well as bodily strength  may be developed through the appreciation, practice and understanding of beauty of movement,” said The Ridgefield Press in reporting her arrival in 1942. 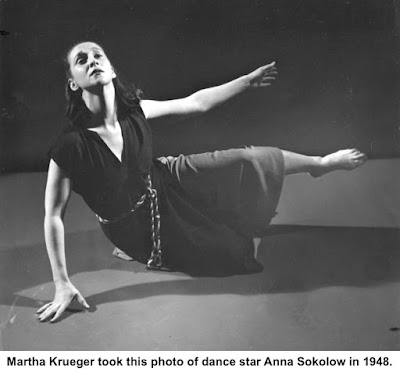 The year after she moved to town, Krueger staged Alex North’s new musical for children, “The Hither and Thither of Danny Dither.” On Aug. 28, 1942 North himself played the piano as the children of the new Marthe Krueger dance school performed the musical  in a PTA benefit at the East Ridge School auditorium — now the Ridgefield Playhouse. (North went on to compose the music for many of the 20th Century’s top movies, including “Death of A Salesman,”   “The Sound and the Fury,”  “Spartacus,”  “Cleopatra,” “The Agony and the Ecstasy,” “Who’s Afraid of Virginia Woolf,  “2001: A Space Odyssey,”  “Dragonslayer,”  and “Good Morning, Vietnam.” He also wrote the pop hit, Unchained Melody, and was a mentor of the young and promising film composer, John Williams.)

During World War II, Krueger   toured with a U.S.O. unit, entertaining troops. She also worked as a professional photographer, opening her own studio in New York. Her photographic work ranged from artistic shots of dance productions to engagement announcement portraits for young ladies  — a number of them appeared in The New York Times in the 1940s. 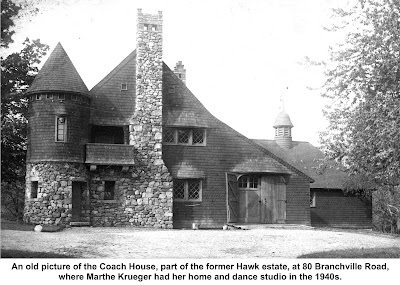 Later she served as ballet mistress at the Silvermine Guild. She had been married in 1938 to importer Adolph Mayer, a widower twice her age, who died three years later.

In the late 1940s, she moved to Wilton where, in 1960, she opened the  Marthe Krueger School of Dance in a studio that was aimed at taking advantage of its natural setting. Former student Christine Leventhal said Krueger “surrounded her lovely glass-walled studio with the best of nature: a tree-encircled pond complete with swans Sigy and Odette (whose elegant necks and movement inspired those within); all sizes, colors and kinds of birds; mallards, wood ducks and geese; deer; muskrats; raccoons; and most thrilling of all — the great blue heron. Marthe loved her animals and birds. She was a gifted gardener as well, and bright swatches and drifts of color surrounded her property.”

“She was a pioneer of dance in Fairfield County,” Leventhal added, calling her “devoted to her students surely, but even more, devoted to the art of dance and a never-ending pursuit of excellence in her art.”

Marthe Krueger taught her last class on the day before she fell ill in 2002 and was sent to the hospital, where she died at the age of 92.

After Krueger left the Coach House around 1948, she leased the place to Paul Draper,  an international tap dancing star. Draper was accused of being a communist and was under attack by followers of Senator Joseph McCarthy. Disturbed at his treatment, he left the U.S. in 1951, moving to Switzerland, but eventually returned to teach and perform.

Chinese art collector Abel Bahr lived there from 1951 until his death in 1959; many works from his collection are now in major museums. A later occupant was Broadway actor and singer Don McKay, who was known for his parties featuring celebrities in the arts.