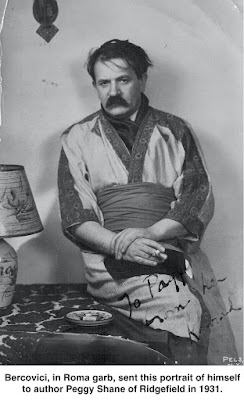 Konrad Bercovici, a self-styled “gypsy,” was a popular American writer and journalist whose friends included Ernest Hemingway and F. Scott Fitzgerald. His successful lawsuit against Charlie Chaplin generated many a headline three quarters of a century ago.

Although his home was literally on the state line along West Lane in Lewisboro, N.Y., Bercovici always considered himself a Ridgefielder. In fact, his mailing address was Ridgefield because the Ridgefield Post Office delivered his mail.

A native of Romania, Konrad Bercovici was born in 1882 to an intellectual Jewish couple who taught their children Greek, French, and German as well as Romanian. At a young age he became fascinated with the Roma — what he always called gypsies. “He spent much of his youth among the tents of gypsies who poured into Romania from the borders of Hungary, listening to their songs and learning their language,” said the New York Times.

When he was 11, his father was killed in an anti-Jewish riot and the family soon moved  to Paris where they began socializing with the literary community. He studied the organ under Charles-Marie Widor — the man who taught Albert Schweitzer — and was soon proficient enough that he gave a recital at the Cathedral of Notre Dame.

While still a teenager, he began to write professionally, often about the Roma. He sold short stories for $5 each, while also working at a variety of jobs, including painting the frame of the Eiffel Tower.

He met his wife, Naomi, a sculptor, in Paris. The couple moved to New York City in 1904. There, to earn a living while pursuing his interest in writing, Konrad shoveled snow from the city streets, played piano in silent picture theaters, sold artificial flowers, and worked in sweatshops.

His first book, Crimes of Charities, appeared in 1917 and criticized what he considered the indifference of organized charities to the people they were supposed to be helping.

The same year, he joined the staff of the New York World, writing sports stories and features, and three years later moved to the New York Evening Post, covering stories in many parts of the world. At the same time he continued turning out short stories for literary magazines.

During the 1920s he also wrote a dozen books of fiction and non-fiction, soon gaining an international reputation as a lively and interesting author. He became one of the Algonquin Table “regulars” that included  Irving Berlin, Robert Benchley, George S. Kaufman, and Alexander Woollcott. Among his circle of friends were such artists, writers, actors, and musicians  as Melvyn Douglas, Diego Rivera,  F. Scott Fitzgerald,  Paul Robeson, Ernest Hemingway, Wilhelm Van Loon, Frank Lloyd Wright, and the Gershwin brothers. A  portrait of him sketched by the young Amadeo Modigliani is in the collection of the Museum of Modern Art in New York. 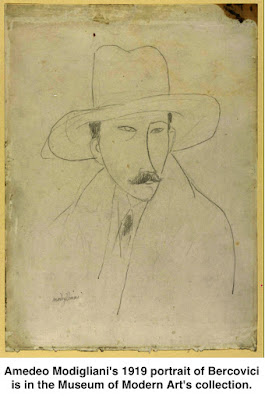 Over his long life, he produced around 40 books, many of them about the Roma — his Story of the Gypsies has been considered a standard work on the subject. However, he also wrote fiction and non-fiction on historical figures, including That Royal Lover, about Romania’s King Caroll, and Savage Prodigal, a biography of the French poet Rimbaud.

The Bercovicis moved to West Lane around 1930, but also maintained a residence in New York City. Among his local friends was author Margaret “Peggy” Shane of North Salem Road, mother of Betty Grace Nash, longtime managing editor of The Ridgefield Press and wife of publisher  Karl Nash.

Karl Nash was well acquainted with Bercovici whom he described as “a frequent speaker at service club meetings over the years, tackling his subjects with a gusto that marked his writings.” In one talk that Nash covered in June 1945, Bercovici told the Ridgefield Lions that he favored imprisoning the entire nation of Germany for the war and its atrocities.  “There is no reasonable argument why a whole nation that has proven itself asocial should not be treated by the civilized nations of the world as an asocial individual is treated by society,” Bercovici told the club. “The crime committed by a thousand or a million or ten million is not less a crime because it has been committed by a mass.”

Some of Bercovici’s books became movies, including The Volga Boatman (1926), produced by Cecil B. DeMille. He himself worked as a screenwriter  for several years in Hollywood where he became friends with Mary Pickford, Douglas Fairbanks, and Charlie Chaplin. It was Chaplin’s hit The Great Dictator (1940) that was the subject of a 1947 lawsuit in which Bercovici  sued Chaplin, charging that he plagiarized material that Bercovici had written. 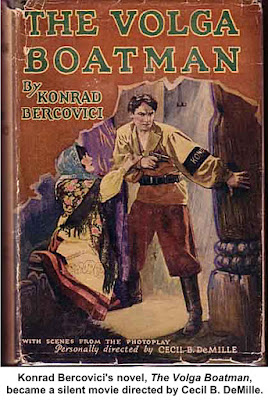 Bercovici was represented  by attorney Louis Nizer. In his book My Life in Court, Nizer explained that “The claim was that Chaplin had approached Bercovici to produce one of his gypsy stories as a motion picture and in the course of those friendly negotiations, Bercovici gave him an outline of ‘The Great Dictator’ story about a barber who looks like Hitler and is confused with him.” The case was settled, with Chaplin paying Bercovici $95,000 ($1.1 million in 2020). but with Chaplin also gaining rights to a couple Bercovici books that he could turn into movies.

In his autobiography, Chaplin insisted that he had been the sole writer of The Great Dictator’s script. He came to a settlement, though, because of his “unpopularity in the States at that moment and being under such court pressure, [he] was terrified, not knowing what to expect next.”