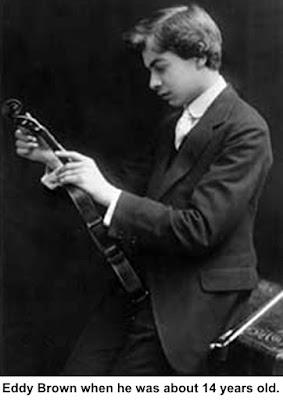 If you were a fan of classical music in the first half of the 20th Century, you knew the name Eddy Brown. A child-prodigy violinist, Brown performed with orchestras across Europe and the United States early in the century and then turned to radio, where he became a pioneer in bringing classical music to the airwaves. He was the first director of WQXR, the New York City station that is still broadcasting classical music today and, thanks to the internet, has listeners worldwide.

A native of Chicago, Eddy Brown was born in 1895, son of an amateur violinist who had immigrated from Austria and a Russian mother who was a follower of Christian Science —  she named her son after Mary Baker Eddy, the religion’s founder.  The family moved to Indianapolis when Eddy was 4. Fascinated by his father’s violin playing, little Eddy began imitating dad and, showing considerable talent, was put into the hands of teachers at Butler University’s music conservatory in Indianapolis.  At the age of six, he gave his first public recital.

Continuing to show great promise, Brown was sent to Budapest at the age of nine to study at the Royal Conservatory of Music under such teachers as Béla Bartók and Zoltán Kodály. In 1905, at age 10, he made his European concert debut in Berlin and a year later, he won the Budapest Concerto Competition — the second-place finisher was a fellow student, Jeno Blau, who later changed his name to Eugene Ormandy. 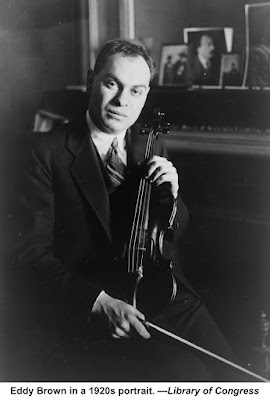 After graduating in 1909, he began performing with orchestras throughout Europe, including a concert that year in Royal Albert Hall with the London Philharmonic. The following year, while continuing concert tours, he began studying in St. Petersburg, Russia, with violinist Leopold Auer. A fellow classmate was a young Jascha Heifetz.

Brown returned to the U.S. in 1916, making his debut in his hometown of Indianapolis with the New York Symphony, and a few days later, performed the same concert at the Metropolitan Opera House in New York. Late that December, he gave a recital in Carnegie Hall. A New York Times reviewer observed: “Mr. Brown is one of America’s young artists who have come before the public at a time when war has sent all the greatest to these shores, and native talent must meet a competition never matched oversea.  He has maintained his place before the public by force of ability and character and a large audience greeted him yesterday.”

Over the next dozen years, he continued to perform in recitals and with orchestras around the country and abroad.

Brown was signed by Columbia Records, for whom he produced more than 60 recordings between 1918 and 1927. In a 1923 interview, he said that it was harder to record the sound of a violin than the voice of a singer. “The great problem is to retain the peculiar timbre and quality of the violin expression to get the feel of the bowing, and the fingering, and to hold the distinctiveness which marks the violin from all other existing musical instruments,” he said. But, he added, “I am confident that it will be only a little while when the magicians of the phonograph laboratories will have captured the secret of violin tone.” 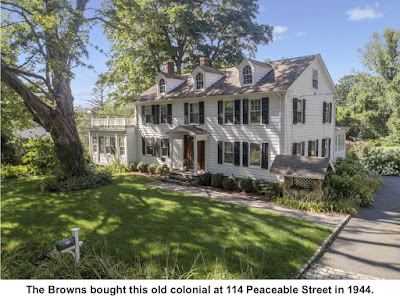 In 1930, perhaps weary of the concert life, he turned to radio, becoming one of the first people to bring serious classical music programming to the airwaves. His first post was as music director with the Mutual network’s WOR in New York, where he produced — and sometimes appeared in — many musical programs. His wife, Beth Lydy, a former Broadway musical actress, wrote  scripts for the programs.

In 1936, he was named director of the brand new WQXR,  the first classical-only station in the United States. He became a part-owner and remained at the station until 1942. (Two years later it was sold to the New York Times; today it is owned, along with WNYC, by New York Public Radio.) He also became a station personality, hosting shows over the years. And, according to a station history, he was not narrow in his programming tastes, inviting guests like conductor Wilfred Pelletier of the Metropolitan Opera to hear Benny Goodman. “Brown’s mixing of jazz and classical artists produced a vibe of mutual appreciation that spilled over to WQXR programming,” the history said. “At a time when 80% of airtime was devoted to classical music, the station began broadcasting blues, jazz and swing.” 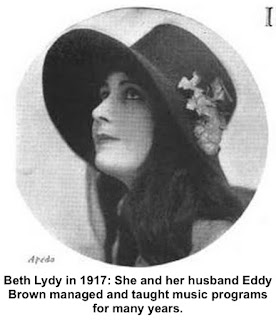 In 1944, Eddy and Beth Brown bought the former Carnall family homestead on Peaceable Street, described by The Ridgefield Press at the time as “a Colonial residence with attractively landscaped grounds, a tennis court, gardens and a two-car garage.” They maintained the place for several years but by 1949 the couple had moved to Italy to work for the  U.S. Department of State in a program to establish cultural ties between European nations and the United States. While there he and the Italian government established the Accademia Internazionale di Belcanto, a school and theater for young singers. He also created a program that allowed young American singers to perform in Europe and study at the Accademia.

In 1956, the Browns returned to the States to become coordinators and teachers at the University of Cincinnati College Conservatory of Music. He later returned to Indianapolis to become the artist-in-residence at Butler University — where he had begun violin lessons 70 years earlier.

While on a 1974 trip to Europe where he was to lecture, he died of a heart attack in Italy. He was 78 years old. Beth Lydy Brown died five years later at 83.

In his younger concert-playing years, Brown did not make a lot of money. To help support himself, he collaborated with Louis Gruenberg, his pianist in many performances, to create the musical, “Roly-Boly Eyes,” which played 108 performances on Broadway in 1919 and then went on the road.

Brown called it the most profitable thing he ever did.