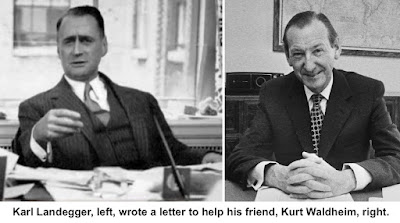 Kurt Waldheim: When the UN Chief

Had A Country Home in Ridgefield

One of the best-kept secrets — or not — in the late 20th Century Ridgefield was the presence in town of one of the world’s top leaders. From 1972 to 1981, United Nations Secretary-General Kurt Waldheim maintained a country home off Wilton Road East and Spectacle Lane.

While he had the residence here, his presence was kept secret, though just how secret might be debatable. However, The Ridgefield Press agreed to keep him out of the local limelight of its printed pages.

It happened this way:

On Aug. 1, 1972, Karl F. Landegger sent a letter to Karl S. Nash, editor and publisher of The Press, explaining the situation. Landegger was a multimillionaire pulp and paper mill owner whose office was 200 Park Avenue in New York City and whose estate, Flat Rock House, covered more than 100 acres between Wilton Road East and Nod Road. He was, like Waldheim, a native of Austria.

It was a very diplomatically written message.

“Dear Mr. Nash,” he wrote. “I have lived in Ridgefield for the past 25 years, and I believe that some twenty years ago we met at some party.

“I am writing to you at the request of Dr. Kurt WaIdheim, Secretary General of the United Nations, who for the past ten years or so has spent many weekends with his family at my home in Ridgefield while he was Austrian Ambassador to the United Nations and, later on, Foreign Secretary of Austria and visiting here.

“Dr. Waldheim is about to conclude negotiations for a four to five year lease on the house owned by Mr. Henri Doll on Spectacle Road, adjacent to my property. Dr. Waldheim and his family plan to use the house as a summer and weekend home.

“Dr. WaIdheim and I are personal friends and ride horseback together regularly on my property and in its vicinity. He has asked me to write to you and submit his request that he would greatly appreciate it if no mention were made in the locaI papers of his renting a house or living in Ridgefield.

“In New York, he is a public figure and as such under great pressure all the time, but he would like to be a completely private person in Ridgefield. There is also the aspect of personal safety. Although due to the nature of his position, he and his family are protected by security guards, we all know that there are a lot of ‘nuts’ around who may wish to attack a public figure.

“Dr. Waldheim would greatly appreciate your collaboration in this matter, about which I write to you in an entirely unofficial manner, although with his knowledge and approval.

“During August the house will be redecorated, and Dr. Waldheim and his family expect to move in about mid-September.”

While Waldheim’s being in Ridgefield was not publicized, it was hard not to notice the very tall and stately Austrian when he was shopping or dining in town — which was not infrequent. “Many people knew Mr. Waldheim was here and saw him from time to time about the village, but The Press never mentioned it,” Nash wrote in a 1984 story. 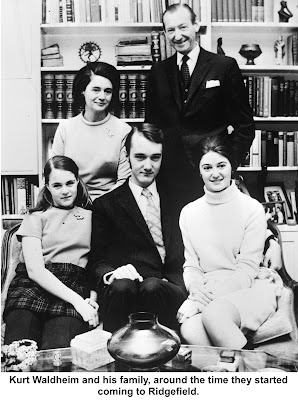 Karl Landegger died in January 1976. Waldheim was planning to retire at the end of that year and in August, Karl Nash sat down at his Underwood and two-finger typed a letter, just as diplomatic as Landegger’s, addressed to the secretary general:

“When you came to Ridgefield four years ago, your friend, the late Karl F. Landegger, wrote me at your request, asking our paper to respect your privacy in our town. We have done this and gladly.

“Now, with indications that you are about to leave, we would like to let our readers, the people of Ridgefield, know that you have been here and what you have thought of their New England town and of them.

“Could you, therefore, arrange for a member of The Press staff to talk with you briefly when you are here again in Ridgefield? Or in lieu of an interview, could someone here talk with you by telephone? As a last resort, would you care to pen a message to Ridgefield upon your departure?

“Mr. Landegger spoke highly of you and your friendship with him as you can see from the copy of his letter to me, which I send you. I am sure you must miss him greatly.”

Waldheim agreed to be interviewed. He arranged for Dick Minnig, a Press reporter, to meet with him at UN headquarters.

But then Waldheim somewhat unexpectedly was named to another term as secretary-general, and he cancelled the interview, again not wanting the publicity in Ridgefield.

In 1981, Waldheim ran for a third term but failed, largely thanks to China, which repeatedly vetoed his candidacy.

However, he did not immediately go home and spent two years as a professor of diplomacy at Georgetown University in Washington, D.C.

In 1984, news that Waldheim would be returning to Austria to run for president sparked Karl Nash into writing a brief article about the diplomat’s dealings with The Press in the 1970s.

“Kurt Waldheim, former United Nations secretary-general, has had his picture in the papers this week, riding a horse in Rock Creek Park in Washington,” Nash wrote. “This never happened to him in this paper during the decade when he was ‘at the vortex of world conflict,’ as one headline writer put it. And with good reason. At least it seemed so at the time.”

He went on to explain the letter from Landegger and the decision to not mention the secretary-general’s presence in town. The story appeared under the small headline,

Now It Can Be Told:

As many will recall Waldheim soon became involved in a “vortex” of a different sort of conflict back in Austria. As he ran for president of Austria in 1985-86, revelations began to appear that he had lied about his military service during World War II, and that he had been an officer in the German army who had been involved in the deportation of Greek and Yugoslav Jews and others to death camps. The charges have been extensively debated over the years, but a U.S. Justice Department investigation allegedly found evidence that he was, indeed, involved in the deportations.

Consequently, the United States government banned Waldheim from entering this country — so did most countries of the world. Waldheim nonetheless served six years as president of Austria (1986-92). He died in 2007.

His old Ridgefield friend, Karl Landegger,   incidentally, had fled Austria in 1938 when the Germans annexed the country as part of the Third Reich. He came to New York in 1940 and moved to Ridgefield in the early 1950s.

His family, who still live here, have been major philanthropic contributors to the community over the years.