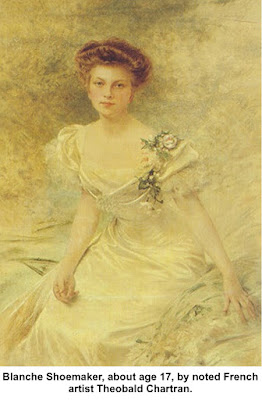 Blanche Shoemaker was no ordinary New York City socialite. The glamorous former debutante spent two years driving injured soldiers from battle zones in World War I and was a poet so popular she was nominated for a Nobel prize — by a member of the Nobel family.

As Mrs. Donald Carr, she once lived in Ridgefield with her  dog- and golf-loving husband on an estate they called “Birchglade.”

A native of Manhattan, Blanche Le Roy Shoemaker was born in 1888 to a well-to-do family — her father had been a railroad pioneer and president. She began writing when she was only seven years old and by 16,  Town and Country magazine had published her first poetry.

She made her social “debut” in 1905, the same year she was painted by the noted French portrait artist, Theobald Chartran, and the same year her first book of poems, The Song of Youth, was published. She was only 17.

In 1907, she married 1904 Columbia graduate Alfred Wagstaff Jr. who had apparently not yet found gainful employment after his recent motor trip around Europe. The New York Times coverage of the wedding gushed over the bride, calling her “highly cultured and exceedingly handsome,” noting that her first book of poetry had come out two years earlier and a second volume of verse, Woven of Dreams, was due out soon.  (Harrison Fisher, an artist once famous for his paintings of young women — especially for magazine covers,  later pronounced her “America’s most beautiful woman.”) 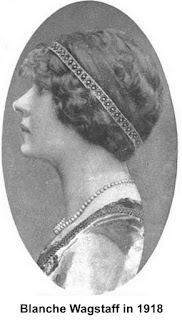 Blanche and Alfred had one child, Alfred III, born in 1908, and were divorced in 1920.  He served many years as president of the Society for the Prevention of Cruelty to Animals and died in 1930. Though she had divorced Alfred, she continued to write her books under the name of Blanche Shoemaker Wagstaff for the rest of her life.

When the United States became involved in World War I, Blanche Wagstaff helped found organizations that  provided stateside war support such as feeding, caring for and transporting soldiers, veterans and war workers. Apparently feeling her work stateside was not enough, she went to France and became an ambulance driver for two years, hauling wounded soldiers from war zones to hospitals.

It was perhaps through her war work that she met an Army veteran, Donald Carr, who had also served in France. They were married in a small ceremony in 1921 among only a few close relatives and friends, said The Times which, nonetheless devoted more space to this small Vermont wedding than it had to her first full-scale ceremony in New York City.

And The Times offered glowing coverage of her life as a young woman, including listing her six books published so far and noting she was founding editor of the Boston Poetry Review.

“She was presented at the Court of St. Jame’s shortly after her debut here and later had a private interview with Pope Pius,” the Times continued. “She has traveled extensively in Italy and in the Orient and has made several campaign trips in the great Sahara desert. She was engaged in war work, driving her motor at the front, was in the War Camp Community Service, and was one of the founders of the National League of Women’s Service and other war organizations.”

A descendant of a couple of Mayflower people, Carr was a real estate broker, a writer, and loved dogs and golf. His canine speciality was springer spaniels and he was widely used as a judge of hunting shows involving those dogs. As an accomplished amateur golfer, he was well known, especially in Westchester County, and won a number of tournaments.

Meanwhile, Blanche continued to write poetry, turning out a total of nearly 20 books in her lifetime. Early on she became known for sensual poems — a dozen of her verses appeared in a 1921 anthology called Poetica Erotica, which contains poems from Latins like Catulus and Ovid right up to modern writers. Her interests apparently changed a bit as she grew older; in 1944, she wrote The Beloved Son, a life of Jesus in verse.  She even turned to drama, writing a couple of poetic plays. H.L. Mencken praised one of them, Alcestis, for its “constant novelty and ingenuity of epithet,” but also criticized her for sometimes letting “her adjectives run riot.” 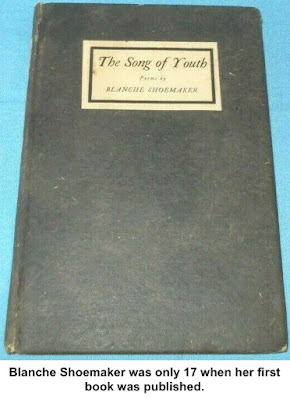 Her poetry was popular not only here, but in Europe, and in 1933, Ludwig Nobel, nephew of the founder of the Nobel prize awards, nominated Blanche Shoemaker Wagstaff  for the poetry award. Her book, Mortality and Other Poems, “is popular in Scandinavia,” said the Associated Press at the time.

The Carrs had been living in Bedford, N.Y., before coming to Ridgefield in the mid-1930s. The Social Register lists their home here as “Birchglade,” an estate we have been unable to identify but which they probably leased or rented.   In 1939  her son, Alfred Wagstaff III, became involved in establishing a summer theater, called The New England Playhouse, located in the Congregational Church House on West Lane. (The church house, which had been the old Ridgefield Clubhouse, burned down in 1978.)  Although  the operation struggled in its first two years, it was starting to draw sizable audiences when World War II came along and the effort ended.

In 1940, the Carrs were living on Ridgefield Road in nearby Wilton. They were in Hendersonville, N.C., by 1961 when Donald Carr died there at the age of 74.

Blanche was living with her son Alfred and grandchildren in Egham, Surrey, England when she suffered a stroke and died in 1967 (many profiles of her incorrectly report she died in 1957). She was 81. Blanche and Donald are buried together in Woodlawn Cemetery, the Bronx. Her son died in 1982. 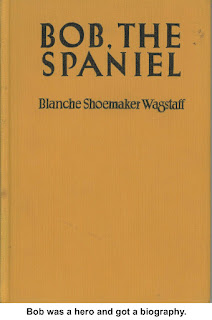 Reflecting her husband’s interest in springer spaniels, Blanche Wagstaff wrote the 1927 book,  Bob, the Spaniel: A True Story, which among other things told how their dog saved them from their burning farmhouse.  Bob had also saved another dog from drowning and in 1930, Bob received a silver medal from the “Dog Hero Legion” in New York City.

Blanche may not have gotten her Nobel, but Bob got his silver.