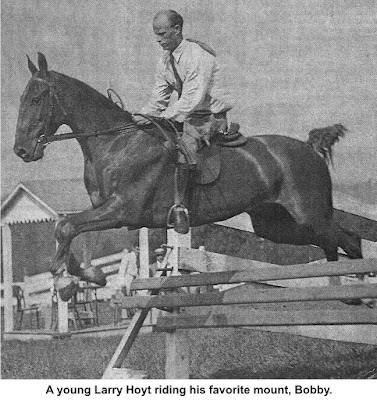 Larry Hoyt: A Centenarian Who
Loved Horses and the Harmonica

Larry Hoyt was a rare Ridgefield centenarian who spent nearly all of his 100 years in his hometown, and was well-known locally for his love of horses and the harmonica.

Lawrence Chestly Hoyt was born in 1902 in his grandfather’s house on Wilton Road West, a member of a family that dated back to the settlement of the town in 1708. His earliest education was in one-room schoolhouses. One of five brothers, he quit after one year at Hamilton High School to go to work to help support his family.

When he was 17,  Hoyt falsified his age so he could enlist in the U.S. Army, with the aim of serving in the cavalry. Raised among farmers, “I had always loved animals, especially horses,” he said in an interview when he had just turned 100.

He was sent to Vermont to train  horses for military combat and drills, and then to Texas, serving with Troop A of the Third Cavalry. He was one of the last of the “Brave Rifles” — a name coined by General Winfield Scott during the Mexican-American War for the Third Cavalry.  “We were the last mounted cavalry,” Hoyt said. “They were changing over to a completely motorized army at that time.”

“I think being in the cavalry was a highlight for him,” said his daughter, the late Doris Hoyt Ventres of Ridgefield. “If he didn't get married, he probably would have gone out and been a real cowboy.”

When he did leave the Army, he went to work for the village blacksmith, Harry Thomas, on Catoonah Street, shoeing 25 to 30 horses a day. He commuted the five miles to and from work on foot each day.

Working for Harry Thomas was more than a chore. There he got to court Gertrude “Trudy” Thomas, Harry’s daughter, whom he had known since grade school. The two were married in 1925.

Preferring to work outdoors — and with horses, Hoyt soon went to work on the Silver Spring horse farm of a wealthy New York lawyer, not only serving as  superintendent, but also training, riding and showing horses. His favorite mount was Bobby, who won more than 30 ribbons.

After 13 years of estate work, he started his own landscaping and tree business.

In 1956, however, he took a better-paying job as the head custodian at the then-new Veterans Park School. “I had a hard time getting used to this indoor work,” he told Ridgefield Press reporter Rick Honey. “At the beginning I wanted to quit every three months.”

When he’d complain about the job to his friend (but not relative), Irene Hoyt, the popular Visiting Nurse Association nurse, that his feet hurt from the custodial work, “All she would tell me was that they would toughen up.”

So he worked nearly 18 years at Veterans Park before retiring at the age of 71. And he did not regret working those years at VP. “They keep you young,” he said of the pupils, who would years later often come up to him in stores or on the street and say, “Hi, Mr. Hoyt.”

Larry and Trudy Hoyt raised two children during the Depression. Doris Ventres recalled her father as a gentle man who never got angry. “I don’t think I have ever seen him mad,” she said. “He’s been a wonderful daddy.”

Around 1980,  his wife was diagnosed with a disease similar to Alzheimer’s. Hoyt refused to allow her to go to a nursing home and he cared for her at their home on Silver Spring Road for nine years until her death in 1989. 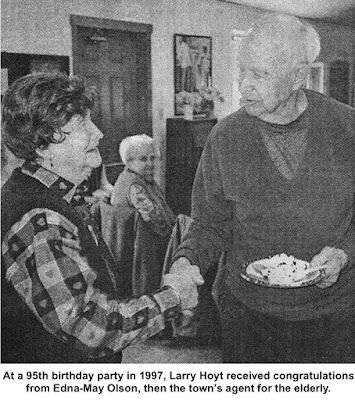 An avid gardener, he enjoyed raising hybrid tea roses. In season his yard was always filled with flowers, much to the enjoyment of those who traveled Silver Spring Road. Even at 100, “he spades his own garden, he mows his own lawn, he trims his hedges, he takes care of his perennial bed,” said a neighbor and friend shortly before Hoyt’s death.

As a boy,  Larry Hoyt learned to play the harmonica and eventually became known in the community as “The Harmonica Man,” entertaining both young and old with his playing. At his 100th birthday party, he put on a harmonica performance.

At the Early Bird Cafe, the Ridgefield Men’s Club or among family and friends, Hoyt was known as a charming conversationalist who could tell stories of early 20th Century Ridgefield and Army cavalry life. He enjoyed recollections of listening to Franklin D. Roosevelt’s fireside chats. “Roosevelt was a very effective president,” he told an interviewer when he turned 100. “His character was different than presidents today.”

He also had a fine sense of humor. Three months before he died in August 2002, when more than 100 people gathered to celebrate his century of life,  Hoyt confided that when he arose each morning, he’d look at a picture of himself as a young cavalryman and would ask: “What is that handsome young man going to do today?”