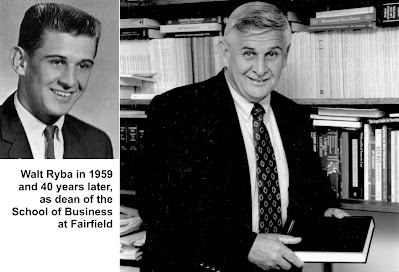 Fellow students at Ridgefield High School knew that Walt Ryba would be a future leader. After all, the recently arrived Ridgefielder  had, by his graduation in 1959, been president of his sophomore, junior and senior classes, and co-captain of the football, baseball and basketball teams.

In fact, the Class Will gave “Walt Ryba’s many abilities and class leadership to future senior class presidents.”

It also gave his “oinky Studebaker to anyone who doesn’t like fast cars.”

His abilities and class leadership — not car choices — led to a lot more, and 40 years later, Dr. Walter George Ryba Jr., was dean of the School of Business at Fairfield University, where he was also professor of business law.

Dr. Ryba (pronounced Ree-ba) was born in Stamford in 1941. His family moved to Craigmoor Road when he was a freshman. Learning that he had been active in youth sports in Stamford, RHS Principal Kip Holleran quickly signed up Ryba  for the baseball, football and basketball teams. He played end on the school’s first 11-man football team, was a basketball forward known for his “stylistic jump shot,” and as catcher for baseball, was “a mainstay of the team.” He was a leading hitter in the Housatonic League and named the high school's MVP in 1959.

Ryba went on to Dartmouth where he played baseball and football until a severe injury ended his college athletic career, but not his educational pursuits. After graduating from Dartmouth in 1963, he earned a master’s degree in economics at Trinity College in Hartford in 1971 and a law degree from the University of Connecticut in 1975.

Dr. Ryba began teaching at Fairfield University in 1982. He specialized in business law and regulation, focusing on antitrust regulated environments and international regulation, and his research appeared in many professional journals.

In 1994, what had been an academic department at the university became a separate school, offering a master of business administration (MBA) program. Three years later Ryba was named acting dean and the following year, dean.

He and his wife, the former Geraldine Pannozza — his high school sweetheart from the Class of ’59 — had been living in Lyme for two decades. As Ryba’s workload increased, the commute to Fairfield — as much as three hours coming home — became too much and the couple bought a house on New Street in their old home town.

At the school, now called Charles F. Dolan School of Business, Dr. Ryba made many changes. Under his leadership, the university added concentrations to the MBA in e-business and health care management, introduced a master’s in management of technology — offered jointly with the School of Engineering — and joined a consortium of Jesuit universities offering an MBA program at Peking University in China. He opened sites for MBA courses in Greenwich and Stamford and  added an “Executive MBA in Community Banking,” the first of its kind in the nation.

Dr. Ryba also oversaw the school’s ﬁnal approval of accreditation and its move to the former campus Conference Center, which was completely renovated to accommodate the school’s expanding programs.

All the time, he continued to teach at least one course a year to maintain close contact with the students.

“His door was always open to students and faculty,” said his wife. “As a result, he brought home a lot of work. He used to stay up till 1 o’clock in the morning doing work. But he loved it, he absolutely loved it. And he had so many plans.”

Dr. Ryba’s energetic leadership was tragically cut short. In August of 2000, he was stricken ill at his home and died shortly afterward at Danbury Hospital. He was only 59.

“Walt Ryba was honest, straightforward and always used good judgment,” said Dr. Orin Grossman, academic vice president of the university at the time of his death. “His contributions to Fairﬁeld University and particularly the School of Business will have a lasting impact.”

A year later, the Walter G. Ryba, Jr. Scholarship was established   to honor him by benefiting  multicultural students who have shown significant leadership in academics, student activities and athletics in high school. The same year, the Ridgefield Old Timers Association honored him posthumously for his excellence in athletics and education.

While much of his life was devoted to work in education, Walt Ryba also had more than a passing interest in rock and roll music. He particularly enjoyed Creedence Clearwater Revival, Fleetwood Mac, and Buddy Holly — he saw productions of “Buddy” in London and on several stages in the United States.

He had also never lost his interest in athletics, and was Fairfield University’s faculty representative to the NCAA.