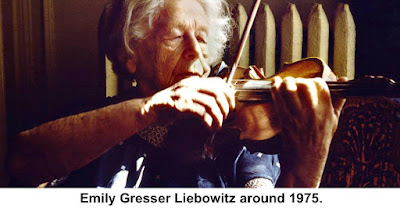 A remarkable but locally little known family who lived on Bennett’s Farm Road for more than a half century gave Ridgefield a large and important part of their estate as parkland. 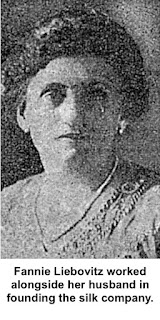 For 30 years, David  Liebovitz, a writer whose father rose from a poor immigrant to a millionaire industrialist, and his wife, a concert violinist whose friends included Jascha Heifetz,  maintained a 45-acre farm, more than half of which their grandchildren donated to the town in 2013.

The story begins in 1852 when Simon Liebovitz was born in Russia. As a young man he emigrated to America,  arriving  in 1874 penniless and jobless. Within two years he had met and married Fannie Unterberg, another recent Russian immigrant, and they began producing a family that wound up totalling six boys. 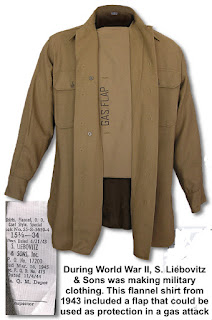 But Simon and Fannie also worked together to  establish  one of New York’s first silk factories at 60 Canal Street in Manhattan. A half century later, S. Liebovitz & Sons employed several thousand people at factories in five states, producing silk, shirts and other garments. When he died in 1930 at the age of 76, his estate was valued at more than $11 million in 2021 dollars, but he had already given much of it to his sons and to charities such as the Society for the Advancement of Judaism. Fannie Liebovitz was also a major philanthropist, especially aiding Jewish causes, and was a founder of the Young Women’s Hebrew Association in New York City. She died in 1944 at the age of 82.

Most of their sons had entered the business with their father, but not David, the youngest, born in 1892. He favored the arts. While David attended Columbia University, he took a break to spend a year in Europe visiting scores of museums and art galleries, reading European literature, and attending many concerts and operas. After graduating Columbia in 1915, he decided to become a writer  — with a break to serve in the Navy during World War I. (For his 1917 draft registration, he gave his occupation as “author.”)

His play, John Hawthorn, was produced by the Theatre Guild in New York City in 1921. It got awful reviews, mostly complaining of stilted dialogue — although one critic criticized the critics for missing the significance of the play’s plot.

Perhaps taking that experience as a lesson, he turned to writing novels, producing three in the next two decades. The first, Youth Dares All, came out in 1930 and “has all the juiciness and humor of Mark Twain,” said historian, sociologist and literary critic Lewis Mumford, with whom Liebovitz became good friends and a correspondent for more than 40 years. 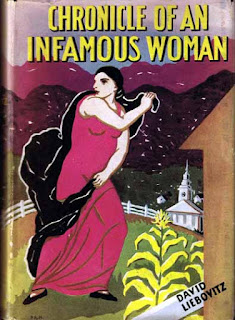 The Chronicle of An Infamous Woman (1933), about a woman whose life is tarnished by local gossips, was called “one of the major novels of our decade” by one reviewer and The Canvas Sky (1946) was described as an unusual novel of circus life.

David Liebovitz also had a taste for art. Starting in the 1920s he began collecting contemporary Western  art as well as Asian works. Pieces of his are now in museum collections.

In 1920, he married Emily Gresser, a Brooklyn native who was a violin prodigy. Born in 1894 to parents who had fled Czarist Russia, Emily began studying the violin at  the age of six. When she graduated from high school, she was accomplished enough to give a recital in Mendelssohn Hall whose audience included such notables as Booker T. Washington, future Harvard president Charles Eliot, and Mark Twain. “My child, you do not know how much joy this evening gave me, how I enjoyed your playing,” Twain told her after the performance. 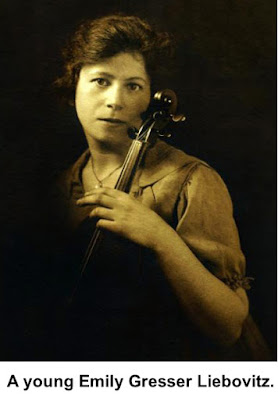 Gresser went on to study the violin in Europe and there gave many solo concerts and performed with many leading orchestras. The outbreak of World War I brought her back to America where she toured the country, giving concerts on her own and with large and small  orchestras.

She also became friends with the young violin prodigy, Jascha Heifetz. Much later, Heifetz  would have a home in Redding and Emily would drive over and join him playing the violin in Heifetz’s “music barn.” Today, Heifetz’s home and music barn are owned by Albert Knapp and Ruth Oratz, both physicians. Albert is  Emily and David’s grandson. 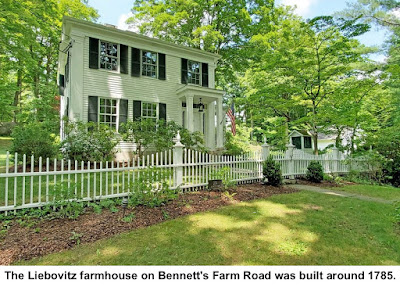 In the mid-1930s, the Liebovitzes sought a home in the country, perhaps driven by David’s interest in nature. As their daughter, Dr. Bettina Liebovitz Knapp expressed it, he “turned to the world of nature in all its full-blown wisdom for solace and inspiration.”

In 1936, they purchased a former Todd brothers farm spanning both sides of Bennett’s Farm Road east of Knollwood Drive. The Greek Revival-style farmhouse at 219 Bennett’s Farm Road was built around 1785 by the Selleck family, whose branches had several large farms in southern Ridgebury. David and Emily, and their two children, Bettina and Daniel, would spend summers and many weekends there, while maintaining an apartment in Manhattan. David died in 1968, Emily in 1981. 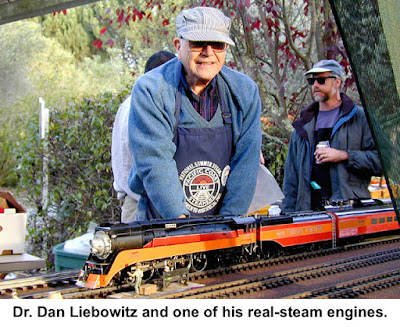 Their son Daniel became a physician in California and a professor at Stanford Medical School. Widely known as “Dr. Dan” Liebowitz (spelled with a W), he was, like his parents, a person of many interests. He was a model steam locomotive hobbyist, who had a sizable outdoor track layout  running a number of small-scale, real-steam locomotives. Like his dad and his sister, he was a also writer, producing a novel, The Lion and The Flame, in 1992; two biographies, John Kirk, the Livingstone Expeditions, and the Crusade Against Slavery in East Africa (1999) and The Last Expedition — Stanley’s Mad Journey Through the Congo (2005), as well as a cookbook, Cook to Your Heart’s Content on a Low Fat, Low Salt Diet, (1970). He died in 2014. 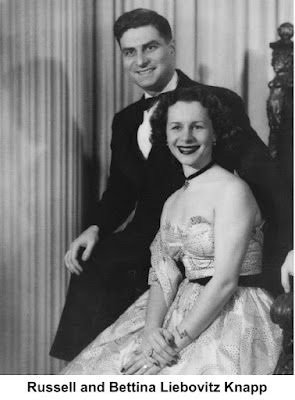 David and Emily’s daughter, Bettina, born in 1926, became professor at Hunter College and author of more than a dozen books on a wide variety of subjects ranging from French fairy tales, gambling, women, and Hebrew myths to biographies of such writers as Emily Dickinson and Jean Cocteau. 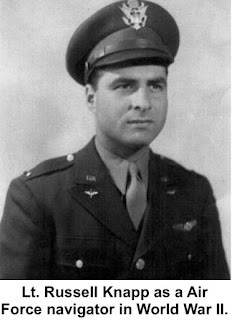 She died in 2010 and is buried in Arlington National Cemetery alongside her husband, Col. Russell Sage Knapp,  a highly decorated World War II Air Force veteran whose bravery in action as a bomber navigator  over Europe was recognized by the French government which named him a Knight in the National Order of the Legion of Honor. He later served in Korea and Vietnam.  Born in 1920 and a 1947 graduate of the Columbia University School of Law, he had a long and distinguished career in both law and business, and was a partner of the U.S. Senator Jacob Javits in the Manhattan law firm of Trubin, Sillcocks, Edelman, and Knapp. 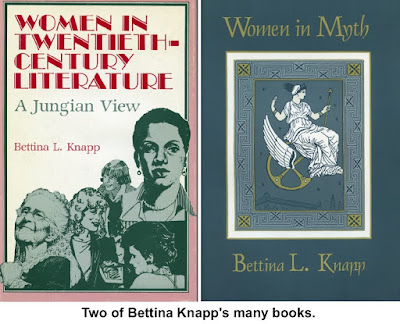 Russell died in 2012. Like many members of the family, he and Bettina were philanthropists. He established the Russell Sage Knapp Education Fund, a foundation that aids medical research and higher education. 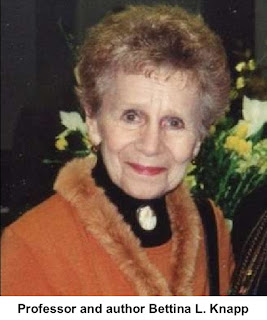 Sons Charles and Albert Knapp  inherited the family farm. No doubt also  inheriting the generous spirit of their parents, grandparents and great-grandparents, they decided to turn the 28 acres south of Bennett’s Farm Road into open space while selling the 16-acre homesite to a builder. They knew that the 28 acres bordered Pierrepont State Park — connecting the park with Bennett’s Farm Road — so they offered it first to the state. The gift would enlarge the Pierrepont Park from 386 acres to nearly 415 acres. However, the state suggested that it would be faster and easier for the Knapps to give the land to the town as open space than to deal with the bureaucratic delays involved in donating to the state. 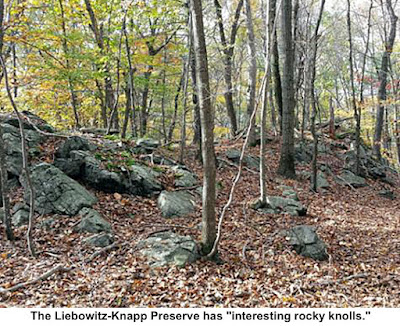 That pleased Dr. Ben Oko, then chairman of the Conservation Commission, who had for some years been trying to contact Bettina Knapp about letting the town have that land.

“When coupled with the development of the property across the street…, that property will give us a connection between Hemlock Hills and Pierrepont State Park, two of the largest open spaces in Ridgefield,” Dr. Oko said in 2013. The subdivision on the north side of Bennett’s Farm Road, he added, “will have five acres of open space with pedestrian access from Hemlock Hills to the donated property.” 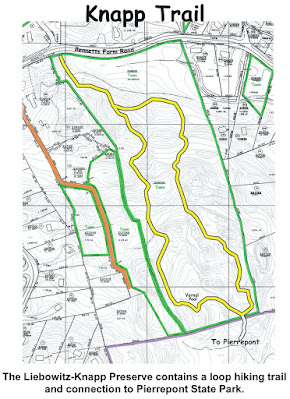 The Conservation Commission created a trail on the south side’s 28 acres and today describes the tract  as having a “one-mile loop with interesting rocky knolls, seasonal streams, a cascade, and a vernal pool in the spring.”

This open space on the south and a pedestrian access on the north also provides a new connection between Pierrepont State Park and the Ives Trail, a long, parkland path commemorating composer Charles Ives that runs through parts of Ridgefield, Danbury, Bethel and Redding.

The 28-acre donation is known as “the Liebowitz- Knapp Sanctuary,” recalling a generous family who had found “solace and inspiration” in their Ridgefield farm.