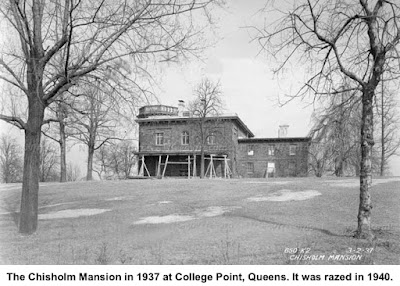 B. Ogden Chisolm:
A Voice for the Imprisoned
B. Ogden Chisolm devoted much of his life — and a good deal of his money — to a portion of the population few Americans have ever cared about: prisoners. Though a wealthy member of a prominent New York City family, Chisolm served with government prison agencies as well as wrote books and lectured widely on the need for humane prison reform.
He was also a prominent Ridgefielder, a friend — and helper — of many in the community over nearly four decades.
Benjamin Ogden Chisolm was born in 1865 in the Chisholm Mansion in Queens, New 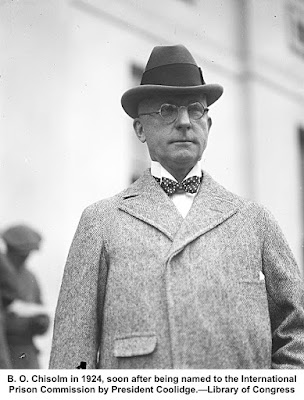 York (family members spelled their name either of two ways, but his branch went for Chisolm). Built in 1848, the family mansion was said to have been a refuge for fugitive slaves in the years before the Civil War. In the 1930s the house was donated to New York City and became the summer city hall for Mayor Fiorello La Guardia. However, the old building was expensive to maintain and was razed in 1940. (In the 1840s, a member of the family had sought to establish an Episcopal men’s college on the  property, which is located a high bluff overlooking the East River; that’s why this section of Queens today is known as College Point.)

Chisolm studied architecture at Columbia University but after graduating entered the world of banking, serving as secretary and treasurer of the Greenwich Savings Bank of New York for 41 years.
Chisolm had a lifelong interest in improving prisons and reform schools. In 1908 he was elected to the executive board of the New York Prison Association and 15 years later, President Calvin Coolidge appointed him the commissioner from the United States to the International Prison Commission. In this post he traveled to many nations to inspect prison conditions and often contributed his own funds to support the commission’s operations. In promoting prison reform that focused on rehabilitation, he believed sentences for a term of years were wrong and urged that confinement for crimes be set at one year as a minimum;  release would depend on the prisoner’s fitness to return to society.
He produced both books and pamphlets on prison reform bearing such titles as “The Man Who Slipped A Cog,” “If It Were Your Boy,” “Man-Power in Prison,” “Making the Prisoner Over,” and “How Shall We Curb Crime.”
In 1902 Chisolm came to Ridgefield, buying a 22-room  “summer cottage” on Peaceable Street near High Ridge. He called it Wickopee Farm — a previous owner had named the house Wickopee Cottage, but Chisolm expanded the property to 12 acres on Peaceable Street, High Ridge and Bryon Avenue, adding barns, fields and some livestock. (Some authorities believe   “wickopee” or “wiccopee” is an American Indian word for the basswood or linden tree. Local historian Richard E. Venus wrote that “Wickopee may have been derived from ‘wickiup,’ which the Algonquin Indians called the huts in which they lived. One thing was sure, the Chisolm mansion was no mere hut.”)
Chisolm was hardly a snob, however, and mixed as easily with the town’s working class as with its gentry. He prefered to be called B.O. in the days before that acronym became a famous advertising term for “body odor.”
His many interests included billiards and movies. His house had its own billiards room with two tables and he was always on the lookout for a good competitor at pool. Among his favorites was Tabby Carboni.
Chisolm often attended showings of “moving pictures” at St. Stephen’s parish house and in 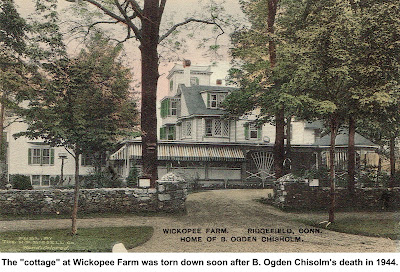 the town hall. According to Venus, Arthur Ferry was in charge of the Saturday night movies at the town hall, and “B.O. rarely missed a show.”  Whenever the ticket proceeds were not enough to cover expenses, Venus added, Chisolm would, “in a very discreet manner,” slip Ferry money to make up the difference.  Chisolm was also one of the major financial backers of the construction in 1940 of the Ridgefield Playhouse on Prospect Street, the town’s first movie theater (now replaced by The Prospector).

“Mr. Chisolm had great compassion for those who were suffering through the Great Depression and felt that he should do something to furnish employment for those who were unable to find it,” Venus said. “In the mid-30’s, he hit on the idea of building a new barn. It should be said that the last thing he needed at that time was another barn. However, he felt that in doing this, he was doing his part, as he phrased it, ‘to drive the Depression blues away.’ ”
When construction was done, he placed a large sign on the barn, saying “Grand Hotel,” the name of a movie popular at the time. He invited all the workers and their families, as well as friends and neighbors, to a ball in the building, which was well decorated for the occasion.  He hired a band consisting of Jim Bacchiochi on piano, Paul Waldarke on sax, Gene Casagrande on violin, Val Roberti on trumpet, and Dick Venus on drums.
“Mr. Chisolm stood in the doorway as the people arrived,” Venus recalled years later. “He had a bottle of milk in one hand and a bottle of champagne in the other. After greeting his guests and exchanging pleasantries, he would then ask, ‘Which will you have, milk or champagne — they both 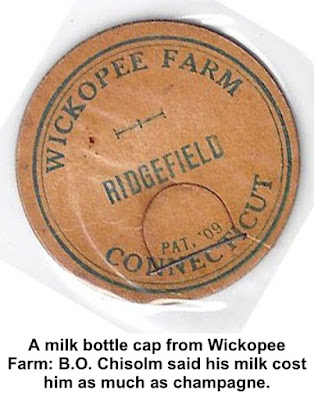 cost me the same.’ At that time one man was supposed to easily take care of 20 cows and at Wickopee Farm, there were two men to care for two cows, so B.O.’s greeting can be considered to contain more truth than poetry.”

The superintendent of Wickopee Farm for many years was Julius Tulipani, who was as well-known in town as his boss and who was a member of the Board of Selectmen. Chisholm was so pleased with Tulipani’s service that he gave his superintendent a home and the portion of his farm that fronted High Ridge, where Tulipani lived the rest of his life.
In the 1930s his wife, Bessie Rhoads Chisolm, had a serious fall and became wheelchair bound until her death in 1940. Chisolm had an elevator installed in their house, and also ordered two specially designed Buick convertibles, with extra-wide doors and higher than usual roofs to accommodate his wife’s handicap. The cars were called Red Bird and Blue Bird after their colors. Each day at 3 p.m., Venus said, their chauffeur would show up with one car or the other, and take the Chisolms for “a ride around the town they were so fond of.”
B.O. Chisolm died in 1944 at the age of 78 and a few months later, his estate was auctioned off by his second wife, Geri Mooney Dorsey Chisolm, a former singer with the Chicago Opera Company. Chisolm’s residence was torn down not long afterward and replaced with the house now standing at 38 Peaceable Street. “The great white mansion...was a real classic and we feel bad that it is gone forever,” Venus lamented in 1986.
One of Chisolm’s five children, all daughters, was Priscilla Chisolm Davis Lee (1905-1994), who owned the old Bissell building on Main Street for many years. For decades Priscilla Lee was one of the town’s most public-spirited citizens, serving with — often as a leader of — the District Nursing Association, Ridgefield Boys’ Club, the American Women’s Voluntary Services in World War II, the Wadsworth R. Lewis Fund, the Ridgefield Garden Club, and the Village Improvement Society. She was named a  “Citizen of the Year” by the Rotary Club.
“She was always a favorite of everyone who knew her and spent much of her life doing nice things for people,” Dick Venus said.