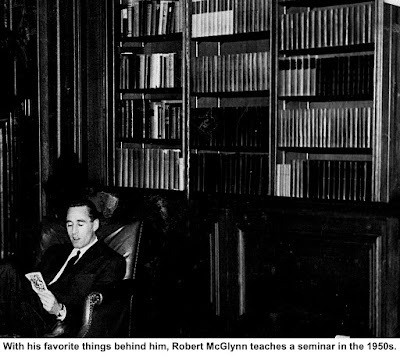 Robert W. McGlynn:
Beloved Man
Many of us often forget the impact that teachers have had on us. Pulitzer Prize-winning writer John McPhee never forgot a Ridgefield native who had a major influence on his life.
Robert William McGlynn was born in 1921 into a working class family who lived on Fairview Avenue. His father, J. Edward McGlynn, was a house painter who late in life became an acting postmaster of Ridgefield.
McGlynn attended Ridgefield schools and excelled at Ridgefield High School. In his senior year he was editor of The Hilltop Dispatch, the school newspaper, which that year won high praise in the Columbia University scholastic press competition. He was ranked second in his class of 37 students  (behind Stata Norton, who went on to become an acclaimed professor of pharmacology and dean of the University of Kansas School of Health Professions).
As #2 in his class, McGlynn became salutatorian at the 1939 graduation. His speech, called “Through the Rough,” likened life to a game of golf, in which a group of men play the 18th hole. One player gets a hole in one while others, running into obstacles with their shots, struggle to 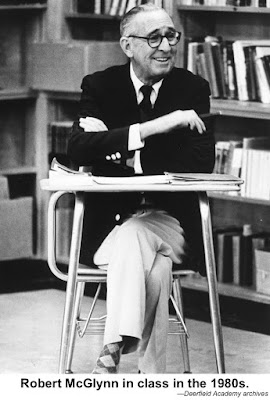 reach the cup. The strugglers are gaining more from the game — or from life, he suggests. “It is always wisest and best to seek that goal by the more difficult pass, for with the dumps and the knocks come the care and experience demanded by the importance of the position to be attained,” he says. “Those same bumps and knocks mold the character of the individual and the more intricately molded the character, the more capable the individual.”

One sentence in his talk, describing stronger vs. weaker players, perhaps hinted at one of his own struggles: “Determination, education and competency are ready and willing to back up the weaker.” In his senior year, his physician told McGlynn his health was too fragile for him to attend college and that he might not live beyond the age of 21.
McGlynn ignored the doctor’s advice and went to Wesleyan University where, in 1942, he was chosen a member of Wesleyan’s Honors College. Early on in his college years, he had planned to become a psychologist, “an outgrowth of my profound interest in human nature and all its intricacies,” he once told Karl Nash, editor of The Ridgefield Press.
However, McGlynn apparently found literature more rewarding than psychology. After he graduated in 1943 he was immediately hired as an English instructor at Deerfield Academy in Massachusetts, where he eventually became a legend.
At Deerfield, around 1948, McGlynn met a new student named John McPhee, who had transferred for a post-graduate senior year after completing Princeton High School and before entering Princeton University. Though McPhee never actually had him as a classroom teacher, McGlynn became both a mentor and a lifelong friend.
In a 1996 essay McPhee recalled one of his first encounters with McGlynn — on a football practice field.
“Attendance was taken exactly 17 times a day,” McPhee wrote, remarking on how closely 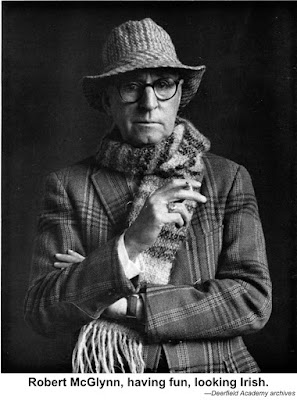 Deerfield students were watched. “In fall, attendance was taken on the Lower Level by Robert McGlynn with a clipboard. Relying on recognition alone, he checked off names. In the ranks and files of lightweight football calisthenics, he failed to see me. He walked around behind my jumping and flapping teammates, and found me lying on the ground looking at the sky. He liked that. He checked me off. In the extended indolence on the grass, he recognized essence of writer.”

McPhee biographer Norman Sims describes McGlynn as “a voracious reader with an Irish background and a babbling, fluid way of talking.” He got McPhee excited about literature in a way his classroom teachers never had. One day he’d hand McPhee a book and later McPhee would go back and discuss it with him. “He was willing to talk about them, that was the thing,” McPhee said. “Like the students, he lived there the whole time and the school was his life.”
And talk he did. McGlynn was famous for his amazing outpourings. As McPhee put it in 1984, his words “come in cloudbursts, in flooded rivers, braided cataracts, foaming white cascades. Kick him in the leg and words pour out his ears.”
In the foreword to McGlynn’s only novel, Ten Trial Street, McPhee wrote that McGlynn “became, among other things, a student of his students, exposing their innards with rays of humor that went to the bone but cut nothing. He led us up the hill to Joyce and Conrad, and down the other side to meet ourselves. He was prodigal with his talent — that brook he was babbling wherever he might be. It was for anyone. It was for me. As a writer now, I am forever grateful to him. And, as it happens, I was never in his class.”
McPhee biographer Michael Pearson put it simply: “McGlynn sparked in McPhee a deeper love of reading than he had ever experienced.”
During his years at Deerfield, McGlynn became widely known for inspiring many young writers and teachers, and for his interest in the literature of Ireland, birthplace of his grandmother and his great-great grandfather. He brought several Irish poets to the campus to speak and work with with students — one, Peter Fallon, spent a year at Deerfield. These visits helped spark McGlynn’s interest in publishing the works of Fallon and others by creating the Deerfield Press, a publishing house 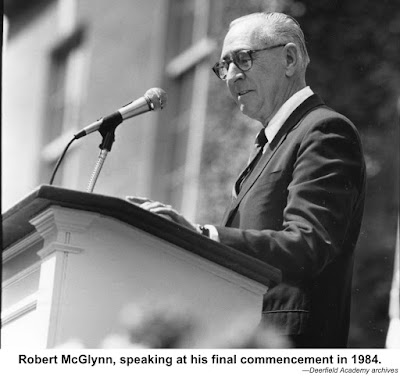 described in its day as “important in the worlds of letters and small presses.”

In 1984, the year he retired, Deerfield Press published the small book, The Little Brown House: A Garland for Robert McGlynn. Among its contributors were poets Seamus Heaney and Robert Creeley. And, of course, John McPhee.
Three years later, alumni and friends donated $850,000 toward establishing the Robert W. McGlynn Chair in the Humanities at Deerfield Academy.
After his retirement Bob McGlynn moved to a log cabin in Warrenton, Va. He read  four to five books a week, gave readings of Irish poetry in the area and maintained a sizable correspondence with former students around the world. (More than two dozen of those students became school, college or university English teachers.)
McGlynn also eschewed technology of almost any kind. “I know nothing of faxes, word processors and computers,” he told a friend around 1990. “I don’t even own a telephone.”
He was only 72 when he died in 1993 — but he was long past 21. His ashes are buried in St. Mary’s Cemetery.
Among the new friends he made in Virginia was newspaper publisher Arthur Arundel, who greatly admired the retired teacher. “There are so few like McGlynn who so completely earn and define the appellation of ‘Beloved Man,’” Arundel wrote after McGlynn’s death.