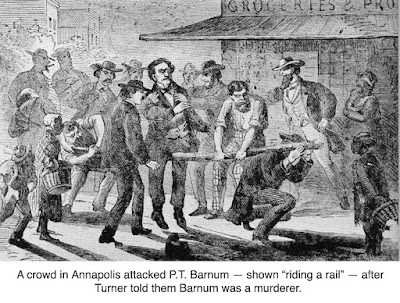 Aaron Turner:
Circus Pioneer
The circus was a form of entertainment immensely popular in the 19th Century. Traveling circuses visited communities large and small across the eastern United States. But Ridgefield had a more than passing connection with American circus history. One of America’s circus pioneers was born here, and some four-legged stars of early circuses died here.
Aaron Turner was born in Ridgefield in 1790, said to be the illegitimate son of Mercy Hony. When he was 9, he went to live on the farm of a court-appointed guardian, Dorcas Osborn, at the corner of Saw Mill and Turner Roads (the house is no longer standing). Turner eventually inherited the farm and much land in the Ridgefield and Danbury portions of Ridgebury. As a young man he farmed the land and also did some shoemaking.
However, farming and cobbling were not his calling. By age 30, he was associated with the circus world, part owner of a troupe that had sprung up from one of the circus families that lived in nearby New York State. By this time, 1820, his 7-year-old son, Napoleon, was already a trick rider in a New York City circus.
Eight years later, Turner the elder had a traveling circus of his own, serving as ringmaster. In 1836, he hired a young Bethel man named Phineas T. Barnum as his ticket seller, secretary and treasurer.
Barnum became an important asset. When the Aaron Turner Traveling Circus failed to draw many customers on a visit to Rochester, N.Y., Barnum suggested that the circus should announce its arrival in a community by having a parade. Barnum later used that circus parade technique extensively with his Barnum and Bailey Circus.
P.T. Barnum learned another public relations lesson from Turner. During a circus stop in Annapolis, Md., Turner jokingly told a gathering that his ticket-taker, Barnum, was a wanted murderer. The crowd took Turner at his word, immediately seized Barnum  and began beating him when Turner screamed that it was just a joke. Turner later told Barnum, “It’s all for our good. The notoriety will fill our tent.”
During the winter, Turner’s circus stayed at his Ridgebury farm, which included land along 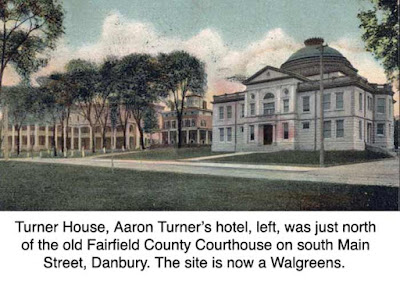 the west side of Ridgebury and Turner Roads. Many circus animals were reportedly housed there and at farms in the neighborhood. Some of these animals that died were believed to have been buried in the old fields along the western side of northern Ridgebury Road—including at least one elephant.

“Turner’s circus was one of the most important and popular in the country,” wrote Ridgefield historian Silvio Bedini, who said both sons Timothy and Napoleon were “skilled riders.”  Turner’s daughter married George Fox Bailey of Somers, N.Y., who later managed the circus and took it over after Turner retired. Barnum, of course, went on to found his own circus, which became the Ringling Bros. and Barnum & Bailey Circus. (In the 1870s George Bailey was a partner of Barnum, but the “Bailey” in the circus name was a distant relative, not he.)
Barnum described Turner as a genius, a man of untiring industry, a practical joker, and a good judge of human nature, reports William Slout of the Circus Historical Society.
Turner eventually retired to the quieter life of operating a hotel, Turner House, in Danbury facing the Main Street green.
He died in 1854 and his hotel, which subsequently became a Knights of Columbus Home, was torn down in the 1960s to make way for—alas—a used car lot. Today, a Walgreen’s pharmacy is there.


Turner Road in Ridgebury, of course, recalls Aaron. So does the Turner Hill subdivision, built in the early 1990s off the south side of Turner Road. Roads there are named for some of the circus families that lived in Ridgefield and nearby, including Hunt, Howes, and, of course, Barnum.