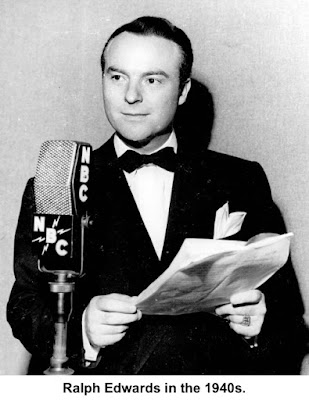 Ralph Edwards:
A Man of Consequences
Anyone who owned a radio in the 1940s or a television in the 1950s knew Ralph Edwards. He created and starred in shows with titles that became so familiar that even a town took one as its name. One of his shows — The People’s Court — is still running today, 78 years after his first success — Truth Or Consequences — went on the air.
For all his fame, however, few people knew that Ralph Edwards and his wife, Barbara,  had a home in Ridgefield — a town he had earlier visited as part of his $500-million bond-selling efforts in World War II.
Ralph Livingston Edwards was born in 1913 on a Colorado farm. When he was 13, his family moved to Oakland, Calif., where as a teenager he combined his ability as a writer with his love of radio to create skits for the local station, KROW.  While studying at the University of California at Berkeley, where he earned a degree in English, Edwards worked at Oakland’s KTAB, now KSFO, doing nearly every job from janitor to producer. After graduating in 1935, he   worked for a while at KFRC in San Francisco, but the mecca for radio in the 30s was New York  so in 1936 he hitchhiked across the country to Manhattan where, he said, “I ate ten-cent meals and slept on park benches.” He landed some part-time announcing work, but his big break came when CBS hired him as a full-time announcer (among his young cohorts was Mel Allen).
By 1939 he was doing 45 programs a week, including The Fred Allen Show, Major Bowes’s Amateur Hour, and the Lucky Strike Hit Parade — all among the most popular shows on radio at the time.
A year later Edwards sold NBC his idea for a game show, called Truth Or Consequences, in which contestants were asked a ridiculously hard or nonsensical question and if they failed to answer correctly — as most people invariably did — they had to undergo some sort of silly task or stunt in order to win the prize. “They had to do such things as bark, crawl on their bellies, push a walnut with the nose, bathe an elephant, get into a doghouse and, in one instance, sell an icebox to an Eskimo,” The New York Times reported.
The show began on NBC radio in 1940, with Mel Allen as host. A year later, a special edition of Truth Or Consequences was aired on the first day of commercial television in the United States. Back then TV was in its infancy — only 7,000 television sets were sold in 1941 (compared to 15 million 10 years later). The show continued on radio until 1957, but in 1950 also became a regular on television; for many years, an Edwards discovery, Bob Barker, hosted Truth Or Consequences. It lasted until 1988, one of the longest running game shows in TV history.
During World War II, Truth Or Consequences went on the road as part of an effort to sell war bonds. On Dec. 14, 1944, Edwards and his crew staged a show at the Ridgefield Playhouse on Prospect Street (now the site of the Prospector) during the Sixth War Loan Drive. With the show’s

help Ridgefield topped $1 million in bond sales in that drive, a record for the town (it was equivalent to about $14 million in 2018 dollars). In all during the war, Edward was credited with selling more than $500-million in war bonds — about $7 billion today!

In 1948, Edwards started an equally popular radio show, This Is Your Life, in which guests,  both famous and unknown, were surprised and then profiled through reminiscences of family and friends. Considered a pioneer of today’s reality TV, This Is Your Life switched to television in 1952 and continued until 1984. Edwards himself hosted this show most of its run (Ronald Reagan filled in twice for him).
Edwards, who won two Emmies for This Is Your Life and one for Truth Or Consequences, also created a dozen other programs including such long-running shows as   Name That Tune and The People’s Court — the latter is still being broadcast.
In 1958, Edwards and his wife, Barbara, bought a house on the corner of North Street and Stonecrest Road, and used it off and on until 1971 — probably mostly on visits from the West where they had a home in Hollywood. Barbara died in 1993 and Ralph in 2005 at the age of 92.


Truth Or Consequences was so popular that in 1950,  Edwards announced he would broadcast his 10th anniversary program from the first town in the United State to change its name to Truth Or Consequences. Hot Springs, N. Mex., did just that, and the community of about 6,000 people now also has a Ralph Edwards Park.  Edwards made a point of personally visiting the town at least once each year for the next 50 years.