Daniel W. Teller:
The First Historian
“There are those who love Ridgefield,” wrote Daniel Teller. “No other word fully expresses their regard for this old town. Every thing done in it is of consequence. Every thing written about it is on interest.” 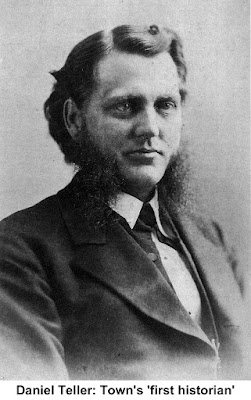 A minister, a physician and the first true historian of Ridgefield, Teller offered those words in the introduction to the first book ever written about this town. His “History of Ridgefield” offers 251 pages that describe the community’s past from its purchase from the Indians in 1708 through what were then modern times: the year 1878.
But probably most interesting about Teller’s history are its 18 illustrations of buildings and places nearly a century and a half ago — the earliest collection of what the town looked like. All are line engravings, created from photographs, and include buildings that no longer exist as well as many that are still standing and well-known.
It is said that Teller was inspired to write his history by his love for the town and as an escape from sadness over the death of his wife, Emily, in 1876.  In an excuse for the book’s brevity, he says that “my personal friends will … consider that I have written in the immediate shadow of a great sorrow. In the quiet shade of our cemetery is a grave whose making has left my house unto me desolate.”
Unlike the authors of the other two histories of Ridgefield — George L. Rockwell and Silvio Bedini — Daniel Teller was not a native. He was, in fact, rather a newcomer, having spent only six years in town when the book was published.
Daniel Webster Teller was born in 1838 in nearby Yorktown, N.Y. In 1865, he graduated from New York University School of Medicine with a medical degree and for a while practiced as a physician in Brooklyn, N.Y. However, according to The Press in 1894, “he felt impressed with a sense of duty to preach the gospel and, after deliberate consideration, determined to give up medicine, which he did, pursuing a theological course.”
He studied at the Theological Institute of Connecticut, now the Hartford Seminary, and in 1870 was ordained a pastor at Hadlyme on the Connecticut River. However, he was soon called to serve the 198 members of the First Congregational Church in Ridgefield. He settled here in 1872 and eventually had a house on Prospect Street.
According to the Rev. Charles Hambrick-Stowe in his 2011 church history, “We Gather

Together,” Teller arrived at a time when “the church languished in a number of ways.” But under Teller, “the church’s condition recovered markedly.”

Muriel R. Hanson in a 1962 history of the First Congregational Church said that Teller “became one of the most beloved pastors in the church’s history.”
His obituary in The Press said that “for nearly a decade, he ministered to the spiritual welfare of this denomination, winning for himself many friends and admirers for his scholarly pulpit utterances and his genial, generous personality.”
During his tenure here, the Ladies Foreign Missionary Auxiliary was established at the church to raise money for overseas missions. The auxiliary sponsored many speakers who described the work of missions in far corners of the world. For a small town like Ridgefield in the days before radio and television, such speakers were major sources of education, entertainment and world news.
Also during his tenure a battle flared over which area society the Ridgefield congregation should align itself with. Rather than take sides in a hotly debated issue (that would not be resolved for 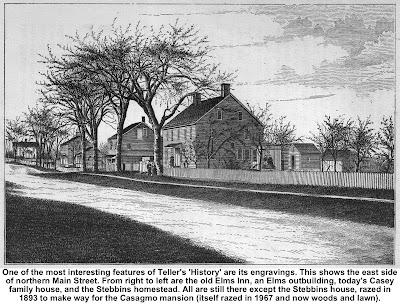 a quarter century), Teller avoided the conflict by maintaining a status of “acting pastor” throughout his years here.

In 1880 Teller accepted a call to the Howard Avenue Church in New Haven. Although it was a larger congregation, he may have been more interested in change than in greater responsibility. At age 42, he had entered a new chapter in his life by marrying 21-year-old Leonora Gyles, who was the niece of several Ridgefielders.
But his love of the town remained. He continued to own land on Prospect Street until 1887. He visited Ridgefield periodically during his tenures in New Haven, Sherburne, N.Y., and Oswego, N.Y. After he died on March 23, 1894, in Fredonia, N.Y., his body was shipped to Ridgefield and his remains placed next to his first wife’s grave in Titicus Cemetery. (Leonora, who died in 1948, is also buried there.)
While a Ridgefielder, Teller “became thoroughly imbued with the local historical and picturesque features of the town, and wrote a concise, terse history of Ridgefield which has since been a valuable book of reference,” he obituary said.
Few towns the size of Ridgefield had a local history written that early; it wasn’t until the 1890s through the 1920s that most small towns got their first official histories. The book comments little on the events that it records and instead, as the author puts it, “deals largely with the simple statement of fact, the ‘unvarnished truth.’ ”  Aside from the engravings and Teller’s restrained but pleasantly old-fashioned writing style,  the book is noteworthy because it contains some information gathered from first-hand sources not available to subsequent historians.
Ridgefield history was not ignored by earlier writers — there were two men, a father and son, also connected with the First Congregational Church, who compiled historical accounts of the town and who Teller used as sources. The Rev. Samuel G. Goodrich, third past of the church, wrote an 1800 sketch of Ridgefield, containing some history and contemporary information valuable to 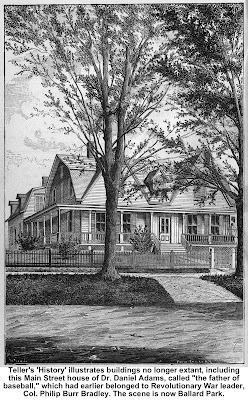 historians today; it was an assignment given to many Congregational ministers in the state to mark 1800, the first year of the new century.

Goodrich’s son, Samuel, went on to become a famous 19th Century writer of history, geography and other books under the name of Peter Parley. To Ridgefielders, however, his most important work was his autobiographical “Recollections of A Lifetime,” published in 1857. In it he spends more than 200 of its 1,100 pages describing his childhood in Ridgefield in the early 1800s. He recalls many of the people and places well known to him and to townspeople then.
It is not known how many copies of Teller’s history were printed by T. Donovan in Danbury, but the number was probably not more than a few hundred. Both leather and cloth-bound versions were published.  Today, perhaps no more than a few dozen original copies  exist in town, many of them owned by the Ridgefield Library or the the Historical Society. However, thanks to the marvels of modern technology, several “print on demand” companies offer new paperback and hardcover editions for as low as $16; a “super deluxe” version bound in antique-looking leather can be ordered for $75 (an original Teller clothbound edition runs from $125 to $200 and rare leather versions have been offered for $400).
Teller, of course, was not interested in whether his book would be collectible. He wanted to record the story of a town so that the people then and later would know and could appreciate Ridgefield’s history.  And he wanted to write that record before it was too late.


“The necessity for collecting as speedily as possible all items of history must be apparent to everyone who for a moment considers the rapidity with which the opportunities for information are diminished,” he wrote. “Records grow old and fade out. Men grow old and die. Every year reduces the ranks of those who have received directly from their parents and grandparents the recollections and traditions which help so much to explain incidents of history.”