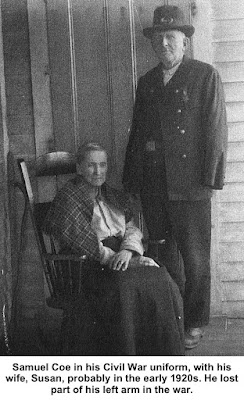 Samuel A. Coe:
‘Mayor of Ridgebury’
Many men who lost an arm in battle might figure that’s enough public service. Not “Uncle Sam” Coe. The battle-worn veteran of the Civil War came to Ridgefield and led an unusually long life of helping his community in many ways — so much so, he was often called the “mayor of Ridgebury.”
“To say that he was much revered, respected and beloved in no way expresses how deeply the inhabitants of Ridgefield felt about Mr. Coe,” wrote The Ridgefield Press at his death in 1936. “His friends are legion, and they all mourn as one the passing of a true friend.”
Samuel Augustus Coe was born in 1843 in the Peach Lake section of North Salem, the son of Quakers whose ancestors helped settle that town  in the early 1700s. (His great-great-grandmother was said to be the first white child born in the Oblong, the 1.75-mile-wide by 50-mile-long slice of Connecticut ceded to New York in 1731.)
At the age of 19, he enlisted in the Union Army at Brewster, and became a member of the 6th Heavy Artillery, Company G, of New York Volunteers.
“Mr. Coe saw hard service in the Maryland and Virginia campaigns,” The Press reported. “In different battles he was near death many times. Bullets struck his clothing, one burned his neck, another his cheek, and another cut a furrow through his hair, but no blood was drawn then. Later, he was wounded at the siege of Petersburg in May 1864 where he was under fire for 30 days.”
That wound at Petersburg caused the loss of part of his left arm, “thus depriving him of his dream of becoming a shoemaker.”
He was taken to New York City to recuperate under the care of the Sisters of Charity, an order of nuns founded by St. Elizabeth Seton (Ridgefield’s church named for her is just up the road from Coe’s Ridgebury farm).
After the war, Coe married Susan Cable of North Salem and by around 1890 the couple had moved to Ridgebury, buying a 100-acre farm at the corner of Ridgebury Road. Their house on Old 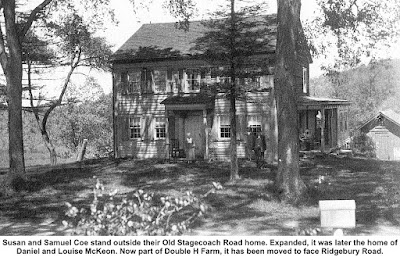 Stagecoach Road had been built in 1782 by Captain Henry Whitney, whose son-in-law, David Hunt, established a Ridgebury-to-Norwalk stage line that left from the Whitney homestead at 2:30 in the morning. That house later became the home of Daniel and Louise McKeon, who called their spread Arigideen Farm. It’s now the equestrian Double H Farm, whose owner moved the enlarged Whitney/Coe/McKeon house to face Ridgebury Road at the corner of Old Stagecoach.

Coe became very active in his new community. He was a Ridgefield selectman for the eight years from 1894 to 1902, a state representative from 1911 to 1913, and a member of the Board of Assessors for 20 years. He served on the Board of Relief  — the elected agency that heard complaints that taxes were too high or unfairly levied — until he was 90 years old.
He was a deacon of the Ridgebury Congregational Church for 35 years, and religiously passed the collection plate — a long-handled one — until a few years before his death. He retired from public service in 1933 and moved to Patterson, N.Y., to live with a friend. He died in 1936 at the age of 92.
“Mr. Coe retained the vigor of his youth for many years and in his declining years was a man of unusual vitality,” The Danbury News said at his death. “His eyesight and hearing remained as keen as when he was a boy and a month ago, he slapped his Ridgefield friends on the back as unceremoniously and with as much vim as he had done 20 years before.”
He was also sharp of mind, The News said. “He recalled the events of bygone days as clearly as if they had happened yesterday and kept in close touch with events of the modern world. On his last chat with friends in Ridgefield, he talked with heightened interest of the 1936 presidential election campaign. He was a Republican and expected to cast his 1936 vote for the GOP.”


He didn’t make it to the polls, however, dying in April.