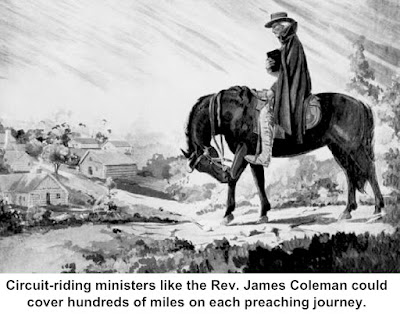 Rev. James Coleman,
Saddlebag Preacher
The Rev. James Coleman lived and died in Ridgefield, and though he was a pioneer in spreading Methodism in the early years of the United States, little is known or has been published about this “saddlebag preacher.”
Coleman was born in 1766. Some reports say his birth was in Black River, N.J., and others say in England — and that he came to this country in 1791, settling first in Ohio, then Long Island, and next  Stamford. It was in Stamford in 1804 that he married Martha DeForest, a local woman. Six years later, the two moved to Ridgefield, buying property in the Scotland section of town, on the east side of the Titicus River. He and Martha had five children, at least one of whom married a minister.
At some point in his early life, Coleman became a Methodist, a denomination whose teachings were being spread throughout the new United States by Jesse Lee and other itinerant preachers.
In 1802, Coleman was appointed a Methodist preacher in a circuit of towns that included Norwalk, Fairfield, Stratford, Milford, Danbury, New Canaan, and Redding,
Soon, however, he was to take on a larger task and territory.  He traveled by horseback on what was called the Courtland Circuit, a journey of at least six weeks extending through eastern New York and western New England to the Canadian border. During his life he is said to have preached Methodism through eastern Canada and most of New England. And he did it all four seasons of the year.
An 1899 history of Fairfield County calls Coleman “one of the best-known preachers of his day in his denomination.” George L. Rockwell, in his “History of Ridgefield,” says Coleman “labored and served in the township, and he is spoken of with grateful appreciation and affection by the early Methodists of Ridgefield.”
Ridgefield had already established a Methodist community or “class” by 1790. But Danbury had not. And it was James Coleman who got the ball rolling in a rather accidental way in the early 1800s.   James Bailey describes it this way in his “History of Danbury”:
“James Beatys lived a few rods beyond the base of Sugar Hollow Mountain, near the corner of the present Starr’s Plain and Long Ridge Roads,” Bailey wrote. “One cold winter day Mr. Beatys was cutting wood in his door yard when Rev. James Coleman, known as ‘Uncle Jimmy,’ a Methodist preacher whose circuit extended from Ridgefield to the Canada line, passed by on horseback, on his homeward journey from Canada.
“According to the hospitable custom of the day, Mr. Beatys invited the traveler in to dinner, an invitation gratefully accepted. Finding that his guest was a minister, Mr. Beatys asked him to make an appointment to preach at his house, which he did two weeks later, giving the first Methodist sermon in Starr’s Plain at a house of a very strong Episcopalian.
“The sermon made a deep impression, and was followed by another a little later, the result of which was a number of conversions, including the children of James Beatys, whose distress was great when he saw his children turn from the church of their father to Methodism.
“The outcome of these meetings was the organization of the first Methodist class in the town of Danbury...”
Today, Danbury has two Methodist congregations, one at Long Ridge that Coleman founded and one in the city proper that grew from his preaching in Danbury.
The Rev. Daniel Garrett, a longtime professor of theological subjects, said the incident described by Bailey was typical of how itinerant preachers would go about introducing themselves and their religion into a community. “They organized what they called ‘classes’ in which people gathered in small groups for weekly discipline and oversight,” Garrett said. “These classes as they grew became circuits, and then later banded together as churches. The real genius of the growth and development was the small groups that were formed.”
It is impossible to tell how many new churches Coleman inspired along his circuits through New York, New England and Canada, but his name pops up in the early records of many congregations.
He died in 1842 at the age of 75 —  that in itself might be considered an unusual feat in the early history of American Methodism. After all, according to a historian at the Long Ridge church he helped found, of the first 700 Methodist preachers in America, nearly half died before they reached the age of 30.


Coleman is buried in Titicus Cemetery next to his wife, who died two years later, and his son, John.