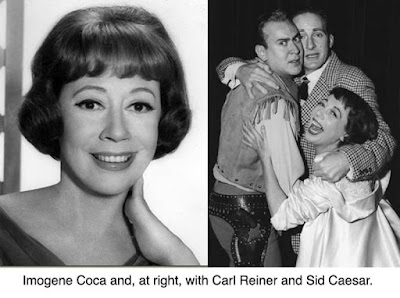 Imogene Coca:
Sweetheart of TV’s Golden Age
Imogene Coca was the “sweetheart of the golden age of television,” as one critic put it. The  comedienne, who enjoyed the country life of Ridgefield, was known by virtually anyone who owned a TV set in the 1950s and beyond.
Coca, whose show business career spanned 80 years, began performing at the age of 11. Her mother, Sadie Brady, was a magician’s assistant, and her father, Joseph Fernandez de Coca, had been a violin soloist with the Philadelphia Symphony in his youth and later conducted orchestras in Philadelphia, Atlantic City and for the Keith/Albeer vaudeville circuit.
Watching him rehearse, the young Imogene “caught the bug.” At the age of 15, she was performing in Jimmy Durante’s Slipper, a tony New York club. She made her Broadway debut in “When You Smile,” starring Jeanette MacDonald, and continued working as a singer and dancer in New York until her friend, producer Leonard Sillman, saw another aspect to her talent.
Working with her first husband, Robert Burton, in “New Faces of 1934,” Mr. Sillman assigned her and a young Henry Fonda to entertain the audiences with brief comedy routines in front of the curtain while the scenery was being changed.
By the early 1950s, she had entered a new medium, starring with Sid Caesar in the award-winning NBC television series, “Your Show of Shows.” According to writer Sidney Fields, “Imogene Coca is the only TV comedienne who can convulse an audience with just a wink. With one grimace she can make her mouth threaten her chin; with another, one eye will battle her nose. The endless variety of expressions on her flexible face continuously amazes everyone including Max Liebman who directs Imogene.”
She later starred in “The Imogene Coca Show”  and appeared in several Broadway shows including The Girls in 509 where she met her second husband, King Donovan. They subsequently appeared in more than 30 productions together, including Plaza Suite, The Rivals, and The Gin Game.  She continued making appearances on television; for a while, she even appeared in the soap opera, “One Life to Live.”
In 1967, she co-starred in the CBS television special, “The Sid Caesar-Imogene Coca-Carl Reiner-Howard Morris Reunion Show,” bringing together the cast of “Your Show of Shows”; it won 11 Emmies. Over the years, she herself earned three Emmies — 1952 for Best Actress, 1966 and 1967 for Outstanding Variety Special).
On film, Coca may be best remembered as Aunt Edna strapped onto the car roof in National Lampoon’s Vacation, with Chevy Chase, and for her featured part in Under the Yum Yum Tree, with Jack Lemmon.
Miss Coca lived in Manhattan for most of her life, but often summered in the country, including periods in Ridgefield. She first came here in the fall of 1953, leasing a house on Silver Spring Lane. Mark Basile, a close longtime friend of  Coca, said she was probably introduced to the town by longtime Ridgefielders Debbie and Jack Rosenberg; Debbie Rosenberg was Coca’s agent for most of her career.
“She had loved Ridgefield,” Mr. Basile said of Coca.