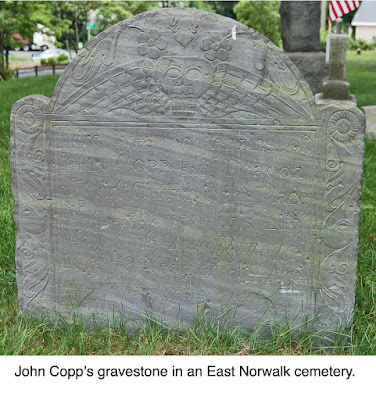 John Copp:
He Helped the Settlers
Anyone who’s lived in Ridgefield knows its largest shopping center, Copps Hill Plaza. But few know Copps Hill, the ridge north of Copps Hill Road and east of North Street, including the Stonecrest and Mimosa neighborhoods. Fewer have heard of Copp himself, John Copp that is. And yet, Dr. Copp was one of the most accomplished people involved in early Ridgefield.
Copp is not a common name in the United States. Nor is it in England, from which William Copp set sail in 1635 for Boston. William was a cordwainer, a worker in leather, and became a well-to-do businessman, owning two houses and much land. William Copp’s nine children included David, who was also a leading citizen. He died in 1713 and is buried in what is still called the Copps Hill Burying Ground near the Boston Common. His friends, Increase and Cotton Mather, are also buried there.
His son, John Copp, was born in 1673 and, while in his 20’s, migrated to Connecticut. His name first turns up in 1698 in Stamford. Norwalk records report that in 1701, a town meeting hired him as schoolmaster.
John Copp was also among the first medical doctors in the state. He received his medical license in 1710 or 1711, and was appointed a surgeon with a Connecticut regiment that was to march to Port Royal in Canada to fight the French.
As early as 1697, residents of Norwalk were becoming interested in the American Indian land 15 miles north. John Copp had learned surveying from his father, and around 1708, drew up boundaries for 20,000 acres, roughly the south two thirds of the present town. In September 1708, Copp and two other men, representing Ridgefield’s first 26 settling families, paid the Indians 100 pounds for this “first purchase” of land.
Copp was elected recorder—now called town clerk—by Ridgefield’s first town meeting in 1709. He helped lay out the town and its Main Street, acted as a physician, and became the first school teacher, instructing the children in a small meeting house somewhere near the present Methodist church.
Although the hill was named for him, Copp had no land in Ridgefield.  He remained a Norwalk resident and probably stayed here for periods with settling families.
Copp’s last entry in the town records came in 1713 when the Rev. Thomas Hauley, who had just become the town’s first minister, succeeded him at both recording and teaching.
Before, during and after his work with Ridgefield, Dr. Copp was active in the civic and ecclesiastical life of Norwalk, of Fairfield County, and of Connecticut, serving as state representative, county surveyor, and a church deacon. Copp’s name is kept alive in Norwalk where Copps Island lies just off the harbor; he once owned it.
In the 1720s, Copp had a farm in the Wilton section Georgetown, then part of Norwalk, but probably did not live there. Nonetheless, the southeast corner of Ridgefield—now Branchville—was called Copp’s Corner back then.  That name did not last long, however.
John Copp’s name made its final known appearance in Ridgefield records in 1739 when he came to town to attend the installation of the new Congregational minister, 26-year-old Jonathan Ingersoll. Mr. Hauley had died the year before.


John Copp died in 1751 at the exceedingly old age of 78, and is buried in the East Norwalk Historical Cemetery. His slate stone notes as his accomplishment in life that he was “Deacon of ye first church in this place.”