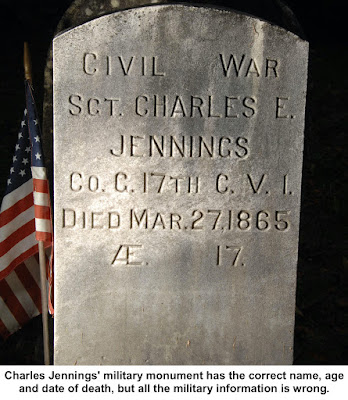 A Boy of War

Charles Jennings is one of the least known and yet more unusual servicemen buried in Ridgefield. Unlike most who joined the military, Charles Jennings was barely 16 years old when he signed up with the Union Navy. And he wasn’t much older when he died in the service of his country — the facts of which are incorrectly reported on his official Civil War monument.

The Civil War has been called “The Boys’ War” because so many soldiers were younger teenagers. Some experts estimate around 100,000 enlistees in the Union and Confederate armies  were 15 years old or younger; 300 were younger than 13. Most of these teenagers joined as musicians, especially drummers. But Charles Jennings was old enough that he was assigned to do a man’s work aboard large vessels.

The Ridgefield town clerk’s records report that Charles Edgar Jennings was born on March 23, 1848, in “School District Number 11,” which was the Florida District, north of Branchville. His parents were Anson and Nancy Jane Jennings “of Reading.” The 1860 census lists Anson as a farmer in Redding (but the town has no record of Charles’s birth).

Why would Ridgefield record the birth of someone from Redding? Maps published in 1856 and 1867 suggest that the Jennings family lived on Simpaug Turnpike, just north of the railroad trestle; that’s in Redding, but it’s right on the Ridgefield town line. Back then towns often shared schooling duties near their borders, and it is probable that the Jennings’ family was served by the Florida School District; the Florida Schoolhouse on the corner of Florida and Florida Hill Roads was closer to their house than any schoolhouse in Redding (or Ridgefield).

It was an official of the Florida District who reported Charles’s birth, probably expecting that Charles would be a future pupil. And it’s quite likely that Charles did get his education at the Florida Schoolhouse. 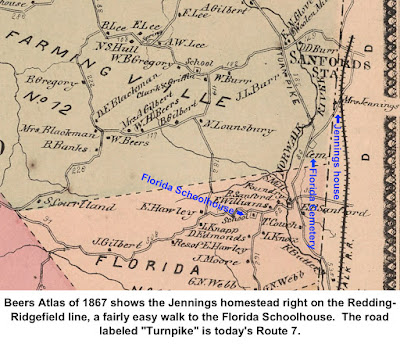 What’s more, it’s quite possible that, although the house was in Redding, much of the Jennings farm was in Ridgefield since the best land in their neighborhood was to the west, not east, of their house — territory along the Norwalk River in Ridgefield.

Charles’s father, Anson,  died March 3, 1861, at the age of 60. He must have known the end was coming, for he made out a will a month earlier, leaving his estate to his wife, Nancy Jane, and their children, Robert, Charles, Henry, and Mary Ann. 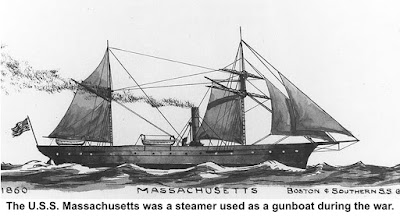 Three years later, on May 3, 1864, Charles enlisted in the Navy. He was 16 years, 4 months and 21 days old, reports Charlene Henderson, who has researched Charles’s record to confirm that information on his Civil War monument is incorrect. Henderson specializes in the 17th Connecticut Volunteer Infantry regiment, to which, according to his monument, Charles belonged. She discovered that Charles E. Jennings of Redding was confused with Sgt. Charles A. Jennings of Georgetown — whose grave in Branchville Cemetery has no military marker at all, even though Charles A. was seriously wounded at Chancellorsville.

The minimum age for enlisting in the Civil War was 18, with parental permission. It is not known whether Charles lied about his age, whether military officials simply ignored his age — which often happened  —  or whether he had permission from his mother. Even young men between 18 and 20 years old were supposed to have parental permission. 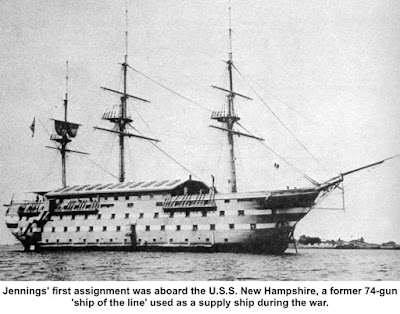 Jennings was apparently assigned to two ships, the first of which was the U.S.S. New Hampshire, a former 74-gun “ship of the line” then being used as a supply vessel. He was then assigned to the U.S.S. Princeton, a former gun boat stationed in Philadelphia Harbor and used  as a “receiving ship” where new recruits were housed. At Philadelphia, aboard the U.S.S. Massachusetts, Jennings died on March 27, 1865, of what his military record filed with the City of Philadelphia called “remittent fever,” but which his death record in the Redding town hall says was typhoid fever.

The Philadelphia death record says he was 21 years old, but in fact he was just four days past his 17th birthday.

Charles Jennings is buried next to his father in Florida Cemetery in Ridgefield, just a few hundred yards down the Simpaug Turnpike from his childhood home.  The simple  veterans monument that marks his grave incorrectly calls him a sergeant, the rank earned by Charles A. Jennings (Charles E. Jenning’s rank was “landsman,” the most basic Navy level given to those with no experience at sea.) The monument also had Charles A. Jennings’ military unit in the Union Army instead of Charles E. Jennings’ naval assignment. It correctly states he was 17 years old.

Right behind the war monument — so close that it is difficult to read — is the family’s gravestone for him. Its epitaph says he died “In sacrifice to his country.”

His mother eventually sold the farm and moved to New Jersey with her younger children Henry and Mary, Henderson reports. By 1900 she was living with her daughter, Mary, and son-in-law, in Lakewood, N.J. and died Sept. 10, 1900 in nearby Belmar.

While few other details of Charles Jennings’ life and service are known, he was probably like many other boys who enlisted with what a New York Times writer called “hopes of adventure and glory.”   Cate Lineberry said in a 2011 op-ed piece that although both the Union and Confederate Armies had rules designed to prevent children from enlisting, “that didn’t stop those who wanted to be a part of the action. Some enlisted without their parents’ permission and lied about their ages or bargained with recruiters for a trial period….Most of the youngest boys became drummers, messengers and orderlies, but thousands of others fought alongside the men.”

At least 48 boys under 18 — one of whom was only 11 years old — received the Congressional Medal of Honor. One nine-year-old grew up to become a major general in the U.S. Army.

michelle johnson said...
This comment has been removed by a blog administrator.
5:49 AM