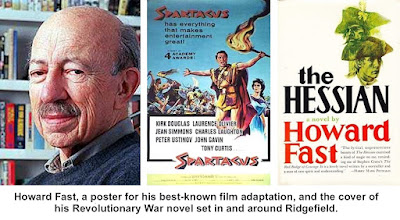 Howard Fast:
Prolific Novelist
Ridgefield has been home to countless writers, but few as prolific as Howard Fast.
The high school dropout published his first novel before he was 20 and by the turn of the 21st Century, had written more than 80 books of fiction and nonfiction under his own name and a series of mysteries as E.V. Cunningham. Literally millions of copies of Fast titles have been printed in a dozen languages, and many have stayed in print for years.
Despite all this output, he took the time out to write a regular column for his local paper.v“Howard is bored to death when he's not writing,” said his wife, Bette, in a 1989 Ridgefield Press interview.
Born in 1914 in New York City, the son of a factory worker,  Fast produced his first novel, “Two Valleys,” in 1933 when he was 18 years old and hitching rides around the country, looking for work.
Six years later, when he was 24, his novel about Valley Forge, “Conceived in Liberty,” was published, sold a   million copies and was translated into more than 10 languages.
During World War II, he wrote copy for the Voice of America, working for the U.S. Office of War Information.
Because of the poverty his family experienced when he was a child, he said,  he joined the Communist Party in 1943, a fact that later got him blacklisted; even his famous patriotic book, “Citizen Tom Paine” (1943), long a classroom classic, was banned for a while in the New York City schools because he was a communist.
He was jailed for three months in 1950 for refusing to disclose some names before the House Committee on Un-American Activities. In 1952, he ran for Congress on the American Labor Party ticket.
Because he was blacklisted, he had to self-publish what became probably his most famous book, “Spartacus.” He also wrote the screenplay of the Stanley Kubrick movie starring starring Kirk Douglas with score by Ridgefielder Alex North. (North also wrote the music for “Cheyenne Autumn,” made from Fast’s novel, “The Last Frontier.”)
Most of his books were historical novels, many of them based on true stories. Another was “Freedom Road,” which was turned into a 1979 TV mini-series starring Muhammad Ali as an ex-slave who became a U.S. senator.
In 1956, he broke with the Communist Party and began a renewed career.  “I was part of a generation that believed in socialism and finally found that belief corroded and destroyed," The New York Times reported him saying in 1981. “That is not renouncing Communism or socialism. It's reaching a certain degree of enlightenment about what the Soviet Union practices. To be dogmatic about a cause you believe in at the age of 20 or 30 is not unusual. But to be dogmatic at age 55 or 60 shows a lack of any learning capacity.”
Fast lived on Florida Hill Road in the 1960s and early 1970s when he moved to Redding, and among the books he wrote while here was “The Hessian” (1972), a Revolutionary War novel set in and around Ridgefield. As are several of his classics, it is still taught in many schools today.
Among his other popular books are “April Morning” and “The Immigrants.”
Over his lifetime he also wrote stage plays, screenplays, television plays, poetry, non-fiction books for children, popular political biographies including two books on Yugoslavia's Marshal Tito, and a history of the Jews.
In 1980, the Fasts moved to Greenwich where he died in 2003 at the age of 88.
“The only thing that infuriates me,” he once said, “is that I have more unwritten stories in me than I can conceivably write in a lifetime.”