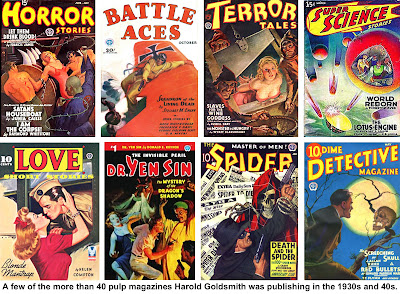 Harold Goldsmith:
Prince of the Pulps
To Ridgefielders in the 1950s, he was a developer and owner of some of the town’s largest pieces of property. To the magazine world, however, he was the “Prince of the Pulps.”
Harold Goldsmith, the man who developed Lakeland Hills and created Lake Windwing, published dozens of “pulp” magazines with titles like Dime Detective, The Pecos Kid, Horror Stories, and The Spider that were read by millions of Americans.
Harold Stern Goldsmith was born in 1903 in Manhattan where his father, who started out a clerk in a wholesale clothing business, was a partner in a skirt manufacturing company. He studied at Horace Mann, an elite prep school in the Bronx, and then entered Columbia University, eventually majoring in engineering but leaving after his junior year.
By 1924, he had started the H. Sanford Goldsmith Advertising Company (he changed his middle name from Stern to Sanford) and four years later, he was advertising director of the Magazine Publishers Group, a rapidly growing company that was acquiring many popular magazines. A year after that, he was managing editor of the group
In the fall of 1929 Goldsmith and two prep school classmates laid the framework for a new company that, by 1930, was called Popular Publications. Only 27 years old, he was publisher. That fall, Popular began publishing pulp magazines, starting out with  Battle Aces, Detective Action 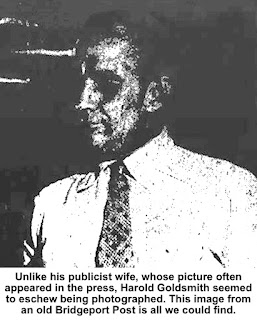 Stories, Gang World, and Western Rangers. (They were “pulps” because they were printed on cheap, pulpwood paper that soon yellowed, as opposed to the classier, more expensive magazines that used glossy, or at least bright-white, paper.)

Around 1935, he and a partner also formed The Hartley Press to publish romance, mystery and Western novels.
By the late 1930s, Popular Publications was churning out more than 40 magazines a month, with such titles as Ace-High, Adventure, All-Story Love, Battle Birds,  Black Mask, DareDevil Aces, Detective Tales, Dime Adventure, Dime Detective, Dime Mystery, Dime Sports, Dime Western, Doctor Yen Sin, Dusty Ayres and His Battle Birds,  G-8 and His Battle Aces, Horror Stories, Knockout, Love Short Stories, New Detective, New Sports, New Western, The Octopus, The Pecos Kid, Rangeland Love Stories, The Scorpion, The Spider, and Terror Tales.
Probably his most famous — and longest-lived — was Argosy, founded in 1882, which has been called the first American pulp magazine. Goldsmith acquired it in the early 1930s and it lasted until 1978.
Popular Publications helped start the careers of many writers. Probably the most famous was Erle Stanley Gardner, creator of Perry Mason mysteries. Goldsmith persuaded Gardner, an amateur writer, to give up his job as an assistant district attorney and devote himself full-time to writing mystery stories.
Another Popular writer was longtime Ridgefielder Frederick Nebel, who created the MacBride and Kennedy series of mysteries about a police detective and a hard-drinking newspaper reporter.
Goldsmith was also involved in some censorship battles. In January of 1941, Mayor Fiorello H. La Guardia ordered all “offensive” pulps be taken off the newsstands in New York City, including two of Popular’s magazines — Horror Stories and Terror Tales.  Goldsmith and his partner, Henry Steeger, “expressed the belief it would cost too much in time and money to fight in court, so they ceased production of those two titles,” said pulp historian David Saunders.
However, Goldsmith did not always give up easily. Because some of his publications were on the racy side — covers sometimes showed half-naked women — the U.S. Post Office in 1943 ruled five of them “obscene” and denied second-class mailing privileges normally given to magazines and newspapers. Goldsmith sued the post office to restore the cheap-rate mailing permit, and won.
In the late 1940s, pulps were beginning to fade from the scene. “Public tastes had changed after World War II and sales of pulp magazines decreased,” said historian Saunders.
By the early 1940s, Goldsmith’s own focus seemed to be changing. In 1940 he bought an estate in Wilton, the hometown of  his third and final wife, Yvonne Clementine Boisseau, a public relations executive. A year later, they were married and in 1943, they bought Taghkanick, the late Wadsworth R. Lewis’s estate on Limestone and Great Hill Roads, as well as portions of  the Todd and Hecht farms farther to the northwest along Bennett’s Farm Road in Ridgebury. He began practicing something he really enjoyed and that seemed totally at odds with  his New York City upbringing and career: He became a dairy farmer.
In 1946, he sold Taghkanick to another magazine publisher, Henry Luce of Time-Life and his wife, recently retired Congresswoman Clare Boothe Luce. (Four years later Luce’s Life Magazine profiled Goldsmith’s wife, who was prominent in the dog world as popularizer of the Weimaraner breed in the United States and a crusader against cruelty to dogs.)
The Goldsmiths moved to another estate on Old Branchville Road. In 1950, he sold his interests in Popular Publications and devoted most of his energy to his two new farms,  located upstate in Litchfield and Morris. He became an expert, prize-winning breeder of Holstein cattle and his stock won awards in fairs throughout the United States and Canada.
Goldsmith also noticed that Ridgefield was becoming a desirable destination for young homeowners wanting to live in the “country.” He decided much of his local farmland could  make more money raising houses than cows.  In 1954, he converted about 30 acres into one of the town’s earliest sizable subdivisions. Lakeland Hills consists of 27 lots  on the north side of Bennett’s Farm Road, opposite the Ridgebury School site and includes Skytop Road, Douglas Lane, and North Shore Drive. It also included Lake Windwing, which  Goldsmith created on the east side of the subdivision and which, for a while, was informally called Goldsmith’s Pond.
According to The Press, “in 1946, zoning had been adopted and Mr. Goldsmith had to make his lots at least one acre in size. He accomplished this in part by drawing some boundary lines under the waters of his lake.” (The Planning and Zoning Commission later outlawed that practice.)
In the mid-1950s the Goldsmiths moved to Westport where Harold died in 1969 at the age of 65.
Their departure from Ridgefield came not long after a 1954 incident that created a bit of a 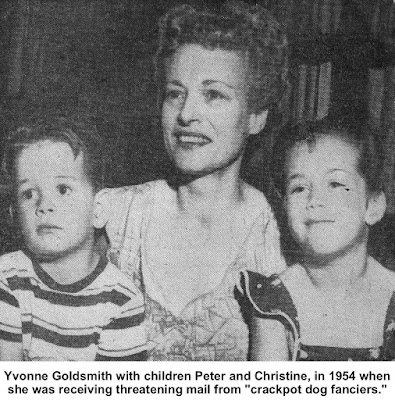 national controversy: Yvonne Goldsmith got into a rather bizarre battle with TV celebrity Arthur Godfrey — back then, both she and Godfrey were both vice presidents of the Weimaraner Club of America.

Godfrey had mentioned on the air that  Splash, his Weimaraner, had a “liaison” with Draga, his German shepherd. Yvonne Goldsmith publicly criticized Godfrey’s allowing the canine get-together, and pointed out that Weimaraner Club members sign a pledge to destroy any puppies that result from accidental cross-breeding.
Godfrey’s response on his TV show: “Fiddle de dee.” He said he never heard of such a pledge and was not about to “drown” any offspring between Splash and Draga.
Immediately, Mrs. Goldsmith was inundated with hundreds of letters, some of them threatening, from people believing she had recommended killing puppies. She was called a “heartless woman” and “a would-be murderer.” A number of letters suggested she stick to doing something more worthwhile for a woman: Being a housewife.
Mrs. Goldsmith said she never suggested killing Godfrey’s puppies, only that Godfrey should have taken precautions to prevent the cross-bred puppy possibility.
As a result of the mail, she said, she was afraid to leave her Old Branchville Road home, or to allow her children, aged six and four, to leave the house.
The State Police, which investigated the threats, attributed the letters to “crackpot dog fanciers.” Nonetheless, for a while, a state police trooper provided a “protective watch” over the Goldsmith’s six-year-old daughter when she went to school each day.