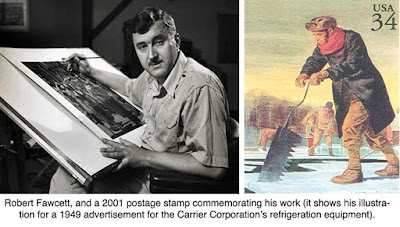 Robert Fawcett:
An Illustrator’s Illustrator
Throughout much of his career, Robert Fawcett was known as an “illustrator’s illustrator.” He did paintings for virtually every magazine of note in the country, illustrated books, and wrote about his craft — his book “On the Art of Drawing” (1958) was popular for years.
In 1947, he and 11 other artists founded the Famous Artists Schools, headquartered on Route 33 in Westport (later the home of Save the Children).
Born near London, England, in 1903, Mr. Fawcett came to Winnipeg, Canada, in 1917 with his family. His father, an amateur artist, passed on a love of art in his son. At the age of 14, Mr. Fawcett quit school to work for an engraver, soon moved to New York and earned enough money working in art studios to spend two years studying art at London University.
He returned to the States in 1924 and at first viewed commercial art with youthful scorn, working at it only to earn enough money to live while doing “serious” painting. But his commercial work began to sell and he eventually became one of the most popular magazine illustrators in the country.
In later life, he viewed commercial painting with more respect. “Art is where you find it,” he said, “and the open, acceptant mind will as easily find it in a modest effort in some remote corner of a publication as in the collections now presented in the popular art galleries.
“When a patronizing layman says, 'You are a commercial artist,' I am sorely tempted to say, ‘Yes — like Rembrandt!’”
A critic once wrote that Fawcett “brought a superb sense of composition to his magazine and advertisement work.” He gained a great deal of notoriety for creating detailed illustrations to accompany a series of Sherlock Holmes stories in Collier’s magazine.
He was a member of the National Academy of Design and a leading figure in the Society of Illustrators.
He and his wife Agnes came to Ridgefield around 1940. Over the years, he frequently participated in and commented on town affairs, often writing letters to the editors of The Ridgefield Press on politics, zoning, and the schools.
He lived on Nod Hill Road until his death in 1967 at the age of 64. His former home is now part of Weir Farm National Historic Site.
In 2001, Mr. Fawcett became one of a half dozen Ridgefielders who have been commemorated on U.S. postage stamps. The 34-cent commemorative shows a picture of an old-time ice cutter and was used originally in a 1949 advertisement for Carrier Corporation refrigeration equipment.