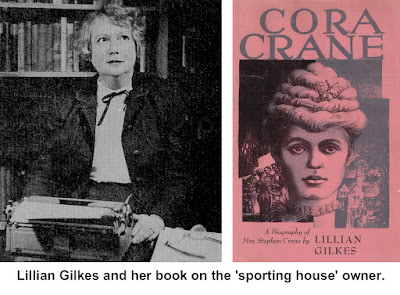 Lillian Gilkes:
Scholar and Democratic Stalwart
Lillian Barnard Gilkes was a nationally recognized scholar, author and critic whose notoriety in Ridgefield was chiefly civic and political.
“When I came to Ridgefield in 1942,” she recalled, “the Democratic Party was underground; to be a Democrat carried a social stigma: Merchants and tradespeople suffered a loss of business if affiliation with the minority party became known.”
She worked on presidential and congressional races and in 1947, helped Harry E. Hull become the first Democrat to be elected first selectman in decades.
“It may truly be said, I think, that Harry Hull’s leadership throughout that time has been a positive force in bringing about a more equitable balance of power between the parties in Ridgefield, certainly a much healthier state of things, if the two-party system is indeed the keystone of our political democracy.”
Four generations of Gilkes’ pioneering family had lived in Jacksonville, Fla., before she was born in 1902. She graduated from Columbia and later taught there and at Hunter College, specializing in the short story. Her textbook, “Short Story Craft” (1949), was used for decades, but she was most known for her book, “Cora Crane: A Biography of Mrs. Stephen Crane.” (Cora, a flamboyant, well-born Bostonian who ran “the smartest ‘sporting house’ in Jacksonville,” had nursed novelist-poet Stephen Crane to health after a shipwreck, and became his common-law wife.)
Gilkes also produced acclaimed short stories as well as book reviews for Saturday Review.
She not only wrote books, but also rediscovered them. Around 1939, she had edited the manuscript of a Southern novel called “The Wedding” and in 1975 proposed its republication in the then-new Lost American Fiction series. The problem was, its author, Grace Lumpkin, had disappeared, at least as far as Gilkes was able to determine. After much searching she found Lumpkin living in a small Virginia town and got the author’s permission for republication. The New York Times praised the book  “as a precursor of the Southern school of fiction and for its concern with family rites.”
In 1930, she had lived with a migrant farm worker family in Arkansas, wrote a novel about poor farm workers, and throughout her life she was interested in the social condition of migrant workers and the poor in general.
In Ridgefield Gilkes was active in civic and charitable work besides politics. During World War II, she was involved in many efforts to raise money for war relief in Europe and to aid refugees.
Among her friends were Bert and Katya Gilden who, as K.B. Gilden, wrote the 1965 best-seller, “Hurry Sundown” — part of the novel was written while the Gildens were staying at Gilkes’ Olmstead Lane home. The book was made into an Otto Preminger film starring Jane Fonda and Michael Caine. Gilkes had been the couple’s professor in a creative writing class at New York University.
Gilkes had shared her Ridgefield home with stepsister Louise Davidson, who was also active in community service in the 1940s and 50s. Around 1962, she moved to Tryon, N.C., where she died in 1977 at the age of 74, with three books unfinished.