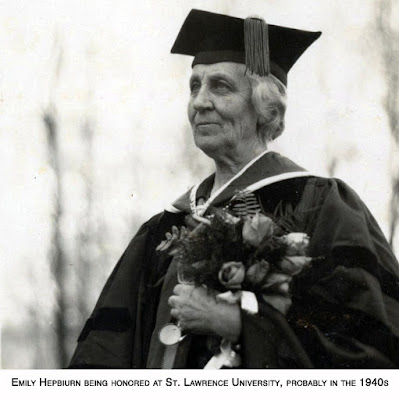 Emily Eaton Hepburn:
Landmark’s Builder
Ridgefield had many notable “summer residents,” New Yorkers who built weekend and vacation retreats that, more often than not, qualified as mansions. Emily Eaton Hepburn was among the more remarkable of these part-time Ridgefielders, but her accomplishments have been largely overlooked locally.
A prominent figure in New York City’s intellectual, civic, and business scene over a half century, Emily Hepburn at the age of 61 built one of New York’s landmark hotels. The New York Times once called her “a real estate novice who created one of New York’s most distinctive skyscrapers.”
The Vermont native was an 1886 graduate of Saint Lawrence University in Canton, N.Y. where she met her husband, Alonzo Barton Hepburn, then a lawyer and state banking official. He became a leading New York City banker and was named United States comptroller of the currency by President Benjamin Harrison.
The Ridgefield Press took note of their impending arrival in May 1908. “Mr. A.B. Hepburn, 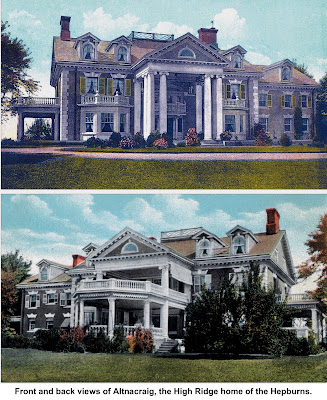 one of the most prominent financiers of the country, former comptroller of the currency and now president of the Chase National Bank of New York, is building one of the most handsome homes to be seen in this town of beautiful homes,” the newspaper said.   The report was a bit misleading. Emily, not Barton, was actually overseeing the design and construction of “Altnacraig,” a magnificent mansion on High Ridge whose name could be translated, “high rock.”  The building later became a well-known nursing home, also called Altnacraig, whose residents included suffragist Alice Paul. Altnacraig burned to the ground in a suspicious 1994 blaze, and was replaced with a house of similar size. (Pictures of Altnacraig are in the Old Ridgefield photos collection.)

Barton also met an unlucky end: He was run over by a bus while crossing a city street in 1922. “He was benefactor to Hepburn Hospital in Ogdensburg, N.Y., and six libraries in St. Lawrence County, N.Y., all of which are named for him,” reports St. Lawrence University, where his and Emily’s family papers now reside.
Emily Hepburn had long been active in civic and charitable organizations including the New York Botanical Garden, City History Club for children, Inwood House girls reformatory, and the New York Infirmary for Women and Children. Here, she was a member of the Ridgefield Garden Club, a group that both beautified and promoted the town.
She was also active in the suffrage movement and, after women had won the right to vote, she addressed a new need in New York: Housing for young, working women. After the war, many recent college-graduate women were coming to New York to seek careers. In 1924 Mrs. Hepburn and several others built the American Woman’s Association, a high-rise residence for working women, at 353 West 57th Street.
Hepburn was dissatisfied with the result, however, and on her own, planned a better building, with a more modern architect. “The boxy, unornamented American Woman’s Association clubhouse 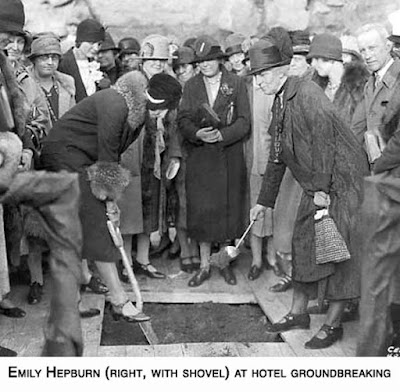 had been simple to the point of drab, the ‘International Style’ with a migraine, designed by the otherwise traditionalist Benjamin Wistar Morris,” wrote Christopher Gray in The Times. “Mrs. Hepburn went to John Mead Howells, son of American author William Dean Howells, and a graduate of the École des Beaux-Arts.”

Hepburn almost single-handedly set about gaining support for the project, including selling stock (one of the stock purchasers was Sara Roosevelt, mother of Franklin Delano Roosevelt).  The 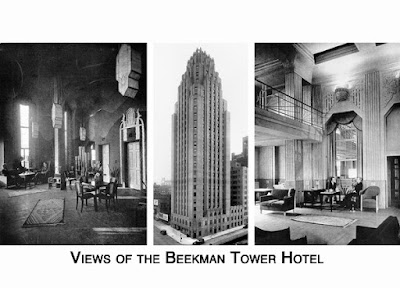 result was the 380-room Panhellenic House at First Avenue and East 49th Street, completed in 1928, described in early promotional brochures as “a club-hotel for women.”  The 28-story, orange-brick building is considered one of the great Art Deco skyscrapers in New York.

“I wanted to prove that women could do big business,” Hepburn once said about her late-blooming career. The quotation appears “Daughter of Vermont,” a biography of her published in 1952, four years before her death.
The hotel was not just a residence, but also a place where women could, in today’s parlance, “network,” and learn from each other. One supporter of the project called it “a training school for leadership, a mental exchange” for women.
Hepburn, who also built and lived in an apartment building at nearby 2 Beekman Place, found occupancy rates at the Panhellenic House declining during the Depression, and opened the building to men as well as women, renaming it the Beekman Tower Hotel. The hotel continued in business until 2013 when it was converted to long-term residential suites.
The Beekman, incidentally, is a block from the United Nations. The Times once reported that, “according to legend,” Hepburn “persuaded the Rockefellers to buy the East River land for the United Nations.”
How’s that for good business sense?