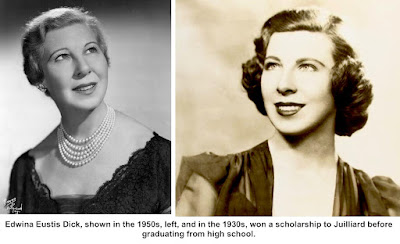 Edwina Eustis Dick:
The Contralto Who Cared
Edwina Eustis Dick was a singer who spent as much time helping others as she did at her career.
Born in New York in 1908, Edwina Eustis was one of the youngest singers to win a scholarship to Juilliard, doing so before even graduating from high school. She also studied at the Curtis Institute of Music in Philadelphia and, after graduating, won the coveted Naumburg Award.
As a contralto, she sang leading roles with opera companies in New York, Philadelphia, Detroit, and other cities, and was a soloist with the New York Philharmonic and other leading orchestras, singing under Stokowski, Toscanini, Reiner, Iturbi, and Metropoulos. The New York Times once said she “possessed one of the most richly satisfying mezzo-soprano voices of our time.” (Her voice can still be heard on Sony Masterworks recordings.)
In the 1930s, she worked with the Musicians Emergency Aid to help create jobs for unemployed musicians. She also worked with special education children in a New York City public school where she was successful in teaching music to a 16-year-old boy, who was unable  to speak, read, or write.
During World War II,  Eustis performed more than 1,000 times during a two and a half year USO tour that took her to all five Atlantic and three Pacific theatres. The songs of her regular program were always chosen by the troops from lists posted on bulletin boards ahead of her arrival. She also sang the church services with chaplains and for the wounded in hospital wards. While she was in Italy with the Fifth Army, she sang as many as seven church services on a single Sunday.
Among her more unusual performances were singing before the Shah of Iran and King Farouk in anti-German propaganda concerts, nine Christmas shows with a G.I. choir in Shanghai, a concert for Mrs. Douglas MacArthur and her son in Tokyo, and Holy Week services on a troop ship returning from Japan.
After the war, she undertook a pioneering project at a Long Island hospital in music therapy for the mentally ill, which led to doctors’ classifying music as “therapy.” She also trained young musicians in the new field of music therapy, and an annual scholarship in her name is offered by the American Music Therapy Association.
Mrs. Dick and her husband, attorney Alexander C. Dick, were founding members of the American Symphony Orchestra, organized and conducted by Leopold Stokowski. Both locally and nationally, the Dicks were active in Republican politics — she served for a time as secretary of the Executive Committee of the Women’s National Republican Club. In Ridgefield she was active in the First Church of Christ, Scientist, on Main Street.
In 1990, the Connecticut General Assembly honored “her long and successful career in music, her generous donation of time and talent to improving the lives of others, as well as her distinguished career in public service.”
She was a strong supporter of the U.S. troops and in 1991, during Operation Desert Storm, she wrote the Press: ”At a time when the men and women in our armed forces are facing their greatest test, we, at home, are facing a test as well. Our task is to maintain our unity and resolve as our troops are doing in the Persian Gulf...Our soldiers have said they have a job to do and are going to get it done. I feel I have a job to do, too, and that is to stand up in strong support of our magnificent troops.”
“Edwina was also a fun person!” said Henrietta Parsons, a friend. “She loved to body surf in the ocean—yes! an opera singer that body surfs.  Edwina and Alex had a summer house on Fire Island.  She would romp around the surf and just loved it!”
She lived  from the 1950s through the 1980s on Old Branchville Road, but moved to Heritage Village in Southbury after the death of her husband. She died there in 1997 at the age of 88.
A road built in 1999 on part of her former homestead was named Eustis Lane.