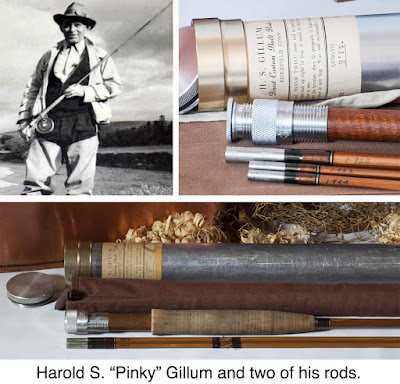 Pinky Gillum:
The Rod to Die For
Would you spend $8,000 for a fishing rod? Many people have paid that and much more to own a genuine Pinky Gillum fly fishing rod.
A Ridgefield native and lifelong resident, Gillum was better known to locals as a skilled carpenter. But in his workshop after hours, he turned out fly rods that today can command five figure prices at sales and auctions, even though they may be 60 or 70 years old.
Harold S. “Pinky” Gillum was born in 1896 in Ridgefield, grew up in town, and served in the U.S. Army infantry during World War I. He was a carpenter and homebuilder, and developed the Colonial Lane neighborhood in Ridgefield in the 1950s.
Gillum loved fishing, especially fly fishing and, largely self-taught, began making and selling bamboo fly rods around 1923, establishing the Gillum Fly Rod Company. Between then and his death in 1966,  he produced some 2,000 rods — he was working on three the day he died, and his wife, Winnie, finished and delivered them. (Gillum and Winifred “Winnie” Beckley, who was much younger than he, had met in the early 1940s in Vermont where she was making rods for Orvis.)
He was a perfectionist, fashioning every part of the rods himself except the ferrules.
“They are buying two weeks of my life,” he would say of customers who purchased his rods.
And he had no patience with buyers who would mistreat his creations. He once yanked a brand-new rod from a startled angler who was jerking it to free a entangled fly. He gave the man back his money and left the stream.
A customer told the story of walking into Gillum’s shop as he was slamming down the phone. He saw her standing there and declared, “That damn Bing Crosby, he’s been fishing lures with one of my rods again!”
Crosby wasn’t the only celebrity to own a Gillum rod: Benny Goodman and Philip Pillsbury were among the proud owners. And some of the 20th Century’s top fly fishermen swore by Gillum rods.
“If I could have only one rod, I would ask Pinky Gillum to make it for me,” said Jack Atherton.
Harry Darbee owned a Gillum he would never part with. “This rod I’m taking in my coffin,” he said. “They say there’s fishing in the Styx.”
Gillum did not advertise his rods, believing word of mouth was enough. And indeed, he often had more orders than he could fill.
He was very secretive about his techniques, but after he died, his wife, Winnie, continued the business, eventually with the help of her second husband, Marcus Prosser, an engineer and avid fisherman. However, those rods do not command the prices and respect that genuine Pinky Gillum rods do a half century after their creator died.