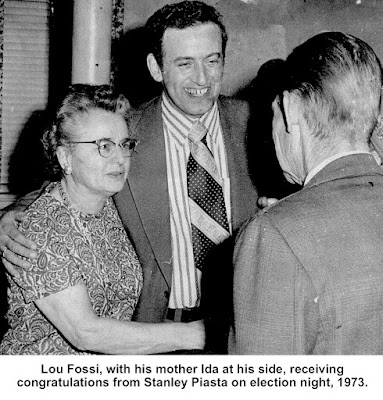 Louis J. Fossi:
‘King Lou’
“Lou Fossi’s fingerprints are all over Ridgefield,” The Ridgefield Press once wrote. He sold shoes, insurance, groceries, and real estate. He served on two town boards, and then for eight years became one of the most popular first selectmen of the 20th Century.
A native son who devoted much of his life to his community, Louis John Fossi was born in 1930, one of seven children of immigrants from the Marches region of Italy. He graduated from Ridgefield High School in 1949 and served in the Air Force where he met his wife, Anne, an Alabama native. He returned to town with his bride in 1955 and worked at Fossi’s Footwear and at selling insurance for Prudential. He later operated the Wayside Market on Danbury Road, opposite Grove Street.
Always civic minded, he was active in scouting and other community organizations, but in the early 60s, “I ran for public office – got crazy, lost my head,” he joked many years later.
He served on the Board of Finance for two years, then eight years as the only Democrat on the Board of Selectmen.
In 1973, he was elected first selectman, one of those uncommon Democrats who could win handily in what was largely a Republican town.
“The Watergate scandal in 1973 may have helped a little, and his personable nature surely helped a lot,” said his son, Larry Fossi. “He was, as his wife says, a ‘people person’ through and through. Everybody knew Lou, and Lou knew everybody.”
Two months after he took office, nature gave him his first test as a leader – a December 1973 ice storm devastated the area, knocking out power for as much as a week in some parts of town while temperatures dipped to minus-2. (The storm inspired the Ang Lee movie, “The Ice Storm.”)
There followed constant budget battles and problems with school closings.
Nonetheless, his administration had many accomplishments: it built Ballard Green senior housing, helped bring Boehringer Ingelheim to town, replaced the dump with a transfer station, moved the police out of the town hall basement and into their own headquarters, and found new uses for the empty, deteriorating old high school.
Campaigns were lively. One year, Republicans slighted his years as a grocery store owner, saying a sophisticated town couldn’t be run like “a mom and pop store.” Another year, the GOP 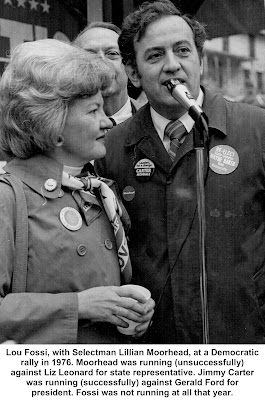 characterized him as too dictatorial, calling him “King Lou” in advertisements — for years afterward, his friends presented him with crowns, scepters and other symbols of royalty as joke gifts.

He was also the target of the Ridgefield Taxpayers League and its longtime leader, Lou Garofalo. A reporter for The Press recalled traveling with Fossi in a town vehicle on hot summer day when the first selectman turned on the air-conditioning, which was something of a luxury in those days of gas rationing and long lines at the pump. What would the head of the Taxpayers League think of that? asked the reporter.  “It’s because of people like him that I need the air conditioning,” Fossi shot back. Except that he didn’t say “people.”
That same reporter remembered one of the few times that  Fossi was genuinely upset with one of his  news stories. He had quoted  the first selectman using the word “damn,” which to the reporter seemed inoffensive.  Fossi was livid; his wife would read the quote, and he would be in hot water for weeks for cussing so freely in public.
Yet, despite his critics and tough times, Fossi always won re-election by wide margins every time he ran.
Retiring from office in 1981, he worked in real estate until moving to warmer South Carolina in 1997.
“You have to take your hat off to the people that run this town, whether it’s the boards and commissions or the garden clubs, whatever,” he said in an interview just before moving. “They do make it a very, very attractive town to live in.”
After he survived major surgery in 2003, Fossi’s oldest daughter, Cathy, asked him whether he had any regrets. Yes, he said, he regretted missing the funeral of John F. Kennedy, whom he admired. A year later, when Ronald Reagan — whom he also admired — died, Cathy phoned her father and asked if he wanted to go to the funeral ceremonies in Washington. He jumped at the opportunity and they spent a memorable day together.
Fossi died in 2013 at the age of 83.