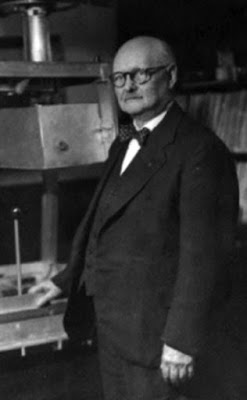 Gerard Herrick:
Rotary-Wing Pioneer
Long before the military developed vertical take-off and landing aircraft, like the Osprey, Gerardus Herrick of High Ridge had invented an aircraft that did that.
Gerardus Post Herrick, who generally went by the name of Gerard, was a rather eccentric but talented lawyer and a skilled research engineer.  Born in 1873, he was a member of the 13th generation of the Post family to live in New York City since the clan arrived in 1654. He graduated from Princeton and became an attorney.
After serving as a captain in World War I in the Army Air Service—not as a pilot but as a gunnery officer—he came up with the idea of a convertible aircraft that could fly either fixed-wing like a conventional plane or vertically as an “autogyro.”  In the 1920s and 1930s, he partnered with a couple of aircraft manufacturers to build a working model of his autogyro.
“The first aircraft, the HV-1, was ready on Nov. 6, 1931,” the Smithsonian Institution says. “The test pilot, Merrill Lambert, made several successful test flights in both fixed- and rotating-wing mode, but when he attempted an in-flight transition between the two, the aircraft fell out of control and crashed. Lambert bailed out of the aircraft, but was killed when his parachute failed to open.” However, an analysis of the accident found the basic design was sound, and Herrick continued to develop what he called a “vertiplane.”
The plane was a fixed-wing monoplane with a large overhead propeller, shaped somewhat like a smaller wing. The aircraft could take off as a monoplane and once in the air, convert to a 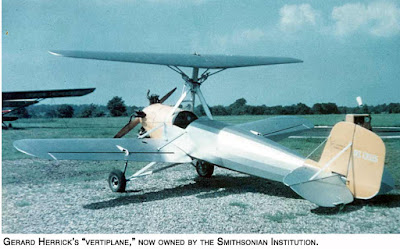 hovering aircraft using the large overhead propeller. It could then land in a very small area. The aircraft could also take off vertically, but could not convert to horizontal flight in mid-air, and had to remain a “helicopter” until it landed.

A new version, the HV-2a, began flying successfully in 1936, cruising at 100 mph as a fixed-wing plane and 65 mph in autogyro mode. The 2,300-pound aircraft needed only 60 feet of runway to take off. Unfortunately, the aircraft’s “remarkable performance did not justify production as the weight penalties imposed by carrying both rotary and fixed wing structures eliminated its commercial advantage over conventional airplanes,” the Smithsonian said.
Herrick continued to work on convertible airplane ideas and unsuccessfully tried to gain investor and government support until his death in 1955. He didn’t limit his interests to aircraft, however, and over the years the attorney/engineer wrote a manual for small-arms instructors, and did research work into blast furnaces, steam engines, lenses, and rifle sights.
“Gerard Post Herrick was one of the earliest to advocate combining fixed-wing flight with rotary-wing flight,” wrote Dr. Bruch H. Charnov in a study of the inventor. “He has been given little notice by vertical flight historians, quite unjustifiably becoming one of the forgotten rotary-wing pioneers, the champion of a concept that even today in various forms seeks legitimacy.”
He and his wife, Lois, had their High Ridge home here starting in the 1920s. A large garage in back once housed the HV-2a, historian Dick Venus recalled. After Lois Herrick died in 1983, Mr. Venus was at an estate sale on the property when he came across “the largest propeller that I had ever seen, lying on the floor of the garage. No doubt this enormous thing could lift a house right off the ground if you had a machine with the energy to turn it.”  He concluded it was a spare for the HV-2a, which had already been donated to the Smithsonian Institution.
Incidentally, Herrick was a cousin of Myron T. Herrick, the U.S. ambassador to France who greeted Charles Lindbergh on his arrival in Paris in 1927. Myron must have been popular: He’s the only American ambassador to France with a street in Paris named after him — Avenue Myron Herrick.—from “Hidden History of Ridgefield”