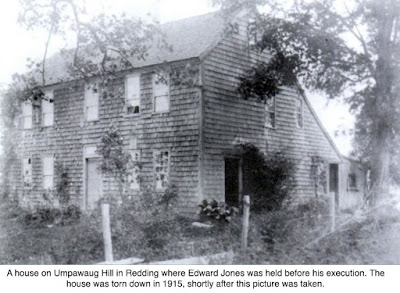 I read your article written on March 29, 2018. The title was: Edward Jones: Hanged as a Spy. In the second paragraph you wrote: "Edward Jones had immigrated to the United States from his native Wales and had settled in Ridgefield in around 1770. Since he had so recently left his native land, it was not surprising that when the war broke out, he felt a loyalty to King George III".

I am especially interested in where he came from. In your paragraph you wrote he immigrated from Wales to the United States. Can you tell me where you obtained that information? What source?

I am interested in Edward Jones and would like to know more about his background. Thank you.

Hi Michael Treadwell: One source of that information was Daniel Cruson's book, "Putnam's Revolutionary War Encampment," in which Cruson says (page 73): "During the trial it came out that Jones was born in Wales and was accordingly loyal to the king."
https://www.amazon.com/Putnams-Revolutionary-War-Winter-Encampment/dp/1609492315