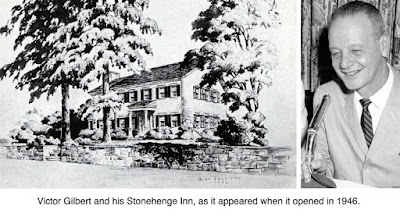 Victor Gilbert:
The Skinker
The historic monoliths on the Salisbury Plain in England inspired a historic inn in Ridgefield. When he was in the Army in World War II, Victor Gilbert was moved by a visit to Stonehenge and when he returned to America and decided to establish a country inn, he called it Stonehenge.
Gilbert was a city boy, born in New York in 1906, the son of a well-known builder. In 1933, at the age of 27 he was managing the One Fifth Avenue Hotel and its One Fifth Bar, which in that year of the repeal of Prohibition had become one of the city’s most fashionable watering holes. There, he gave actress Dorothy Lamour one of her first jobs — as a singer.
In 1946, he bought a Ridgefield house that had once been part of a grist mill complex, and opened Stonehenge Inn which soon became a retreat for the rich and famous. Among the guests there were Judy Garland, Mike Todd and Elizabeth Taylor, Emperor Haile Selassie of Ethiopia, many of the Rockefellers, and Mrs. Thomas Edison.
Gilbert referred to himself as a “skinker” and often wrote columns for The Ridgefield Press, covering a wide variety of topics and called “Not Skinking.” He also had a radio show on WLAD in Danbury, interviewing both celebrities and ordinary folk in the Stonehenge Bar Parlour.
He eventually became enchanted with the American Virgin Islands, opening a restaurant and a discothèque there, and becoming a partner in a hotel. He sold Stonehenge in 1963 and moved to St. Croix full time. But he never forgot Ridgefield and, when he died in 1986, he left the town $1,000 in his will “in appreciation of the warm and sincere welcome to a New Yorker who came to the country to establish his home and business.”
Gilbert had been a collector of old clocks and at some point, he donated a magnificent grandfather’s clock to the town; it has stood in or near the selectmen’s office in the town hall for many years.